Craig and Tavella take home US titles in Sonoma 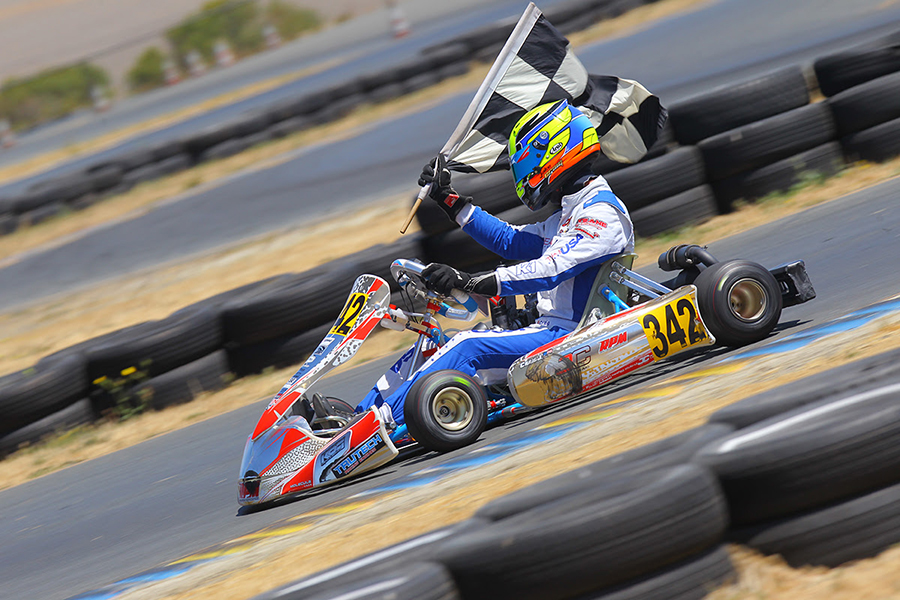 August 9, 2016 – On a sunny day in Sonoma, California at the Simraceway Performance Karting Center, seven drivers etched their names into the history books as US Rotax Grand National Champions after superb racing action in the finals of the 2016 Sofina Foods United States Rotax MAX Challenge Grand Nationals Presented by Fikse Wheels.

Jake Craig waited until only three laps were left before he made his move for the lead on Oliver Askew in the Rolison Performance Group Rotax MAX Senior final. Once he got by, he built up a small lead and went nearly unchallenged by Askew, who made a late, last corner lunge for his life but couldn’t make it stick, allowing Craig to earn his second National title in his home state.

It was a relatively smooth race as Craig jumped to the lead in the opening laps until Askew went by on lap three. From there, the two worked together to ensure no other driver was in the mix at the end. Christian Brooks cruised by himself to take third, missing some of the pace in the final that he showed in the morning prefinal. Austin Garrison and Enzo Prevost completed the top-five.

“It was a very close race,” explained Craig after the race. “Luckily, Oliver and I were able to get a gap from the rest of the field in the beginning. With a few laps to go I decided to make the move to the lead and started to get a little gap. On the last lap I made a slight mistake and it came down to a drag race on the front straight and I got the win by a hair. It is an unbelievable feeling being a two-time National champion. The competition at the US Nationals is always very high so it is definitely a huge accomplishment.” 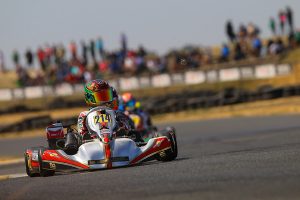 Running last in the day’s order, Koene USA Rotax Junior MAX was a firework show just awaiting the match. At the drop of the green flag, the match was lit and turn one was all carnage, collecting many drivers. When the dust settled, Aidan Keel was leading Dylan Tavella while off-pole starter Michael d’Orlando had fallen to sixth.

d’Orlando worked back up to third by lap five as Keel and Tavella traded the lead. A small error by Keel on lap 13, dropping a wheel in corner one, not only opened the gap to Tavella, it allowed d’Orlando to sneak by in the process and from there it was down to two. Tavella hit his marks while d’Orlando did all he could to close in on the leader, but he came up short as Tavella claimed his third US Rotax National title. His first as Junior, he called it the greatest moment of his life so far. He will join Team USA for the first time at the Rotax MAX Challenge Grand Finals.

Keel settled for third in a race he thought was his, while Carter Herrera and Mathias Ramirez completed the top-five. Edward Portz did drive from 28th on the grid to fifth at the finish, but was excluded after the race by officials for driver misconduct. 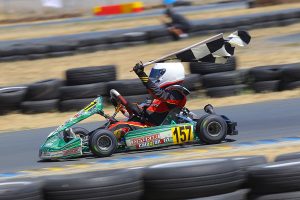 Tyler Gonzalez is having a career year in PSL Karting Rotax Mini MAX as he celebrated another major victory on Saturday. It was a close race between himself and Austin Torgerson in the Mini MAX final, but in the end, Gonzalez’s pace was just too much as Torgerson was unable to make a move for the lead in the late stages of the race. Arias Deukmedjian had a major comeback on Saturday after a disastrous day in the heats Friday. He recovered from the tail of the grid in the prefinal to finish third in the final, cruising most of the race just ahead of Jak Crawford. Ashton Torgerson completed the top-five after a spirited race with Jeremy Fairbairn and Luca Mars. 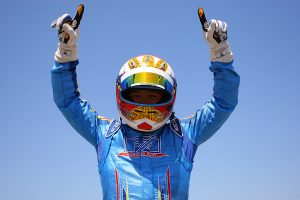 Entering the weekend, Derek Wang had won nearly every Falcone GP Rotax MAX Masters title in the United States but he was still missing the glorious US Grand National title. That changed on Saturday as he drove the wheels off his kart to take home the victory. Battling with Billy Cleavelin, Scott Roberts and John Bonanno, Wang managed the race well, never falling lower than second and took advantage of a last lap race for second to build up a gap and take home the title, securing his position on Team USA for the fifth time in his career. Bonanno won the race for second over Roberts while Cleavelin had to settle for fourth after dominating through qualifying and the heats.

The dust was flying at the start of the AM Engines Rotax Micro MAX final, as many drivers were forced wide on the exit. Taking big advantage of the melee was Branyon Tiner, who jumped from fifteenth on the grid to fifth while Josh Pierson, Jeremy Fletcher and Carson Morgan fell well down the order after starting up front. 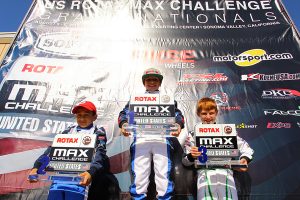 Up front, James Egozi and Diego LaRoque broke free immediately as Ashton Torgerson faded from the leaders after only a couple of laps. The lead duo worked together for most of the race, with Egozi taking a shot at the lead just past midway but LaRoque came right back and regained his position at the front. And while Egozi looked high and low for a spot to pass, it just wasn’t there as LaRoque completed his domination of the weekend with the victory, smiling from ear to ear at the post-race scale line. Pierson rebounded to finish third with a stellar comeback drive, beating Torgerson and Tiner to the finish line. 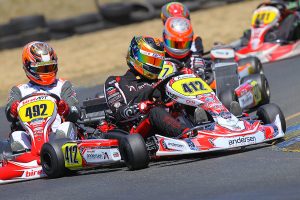 In the Dallas Karting Complex Rotax DD2 MAX final, Dev Gore led for the first time this weekend after timing the start perfect to exit corner one out front. Immediately going on the defensive, Gore and Christian Munoz duked it out for the lead over the next two laps until Munoz got into the back of Gore through the final corner, half spinning the leader and knocking him down to fourth. The race went stale from there as Munoz built up a large lead, like he did all week long, while Gore advanced back up to second easily moving past Lawson Nagel and his teammate Michael McCarthy.

At the finish line Munoz crossed as the victor, but was accessed a five-second penalty for his actions on Gore, making Gore the US National Champion while Nagel scored third after a penalty was also accessed to McCarthy. 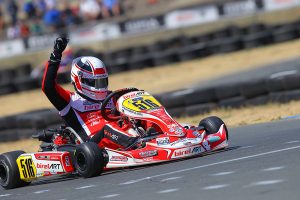 Nathan Mauel was victorious in the DD2 Masters class in Sonoma

Report and Photography Courtesy of MaxSpeed, by Cody Schindel (CKN)