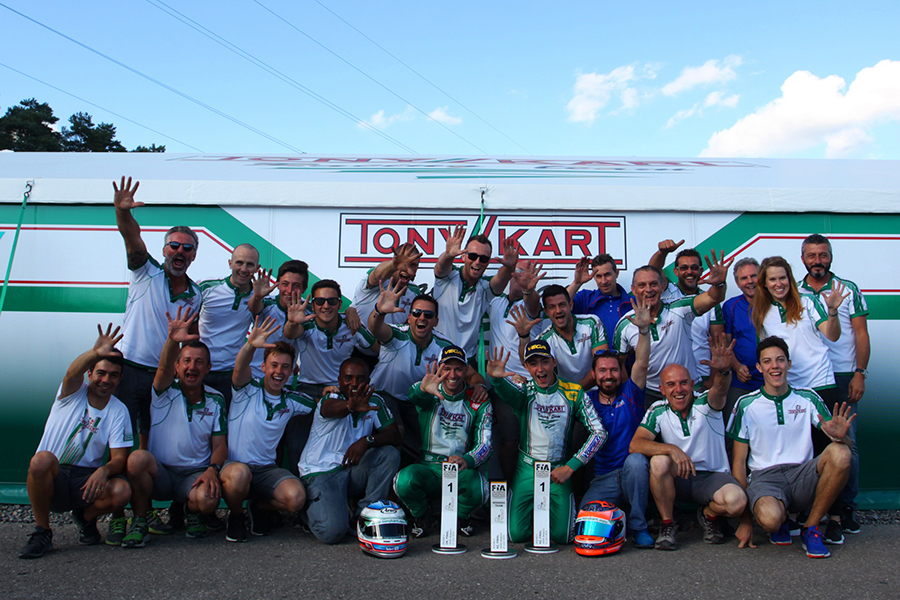 The last round of the CIK-FIA European Championship 2016 could not finished better for our Racing Team. On the Belgian Genk circuit we won both the race and the European KZ title with Marco Ardigò.

The confirmation of the European KZ title (we were reigning champions) was further enriched by the victory obtained on the occasion of the last round of OK category by Clément Novalak.

It was an apparently linear appointment the event held on the demanding Belgian circuit. We came in Genk with Marco Ardigò leader of the standings, the one who signed the pole, won both heats (with a best lap) and, only in the pre-final, had an apparent decline, finishing in second place. Our driver and all the Racing Team staff have worked hard bringing the formidable Racer 401 powered by RKZ engines to an impeccable competitiveness level and reliability, so in the final Marco has re-established the hierarchy taking once more the head of the race at the seventh lap until the end. The second victory out of three races, obtained in this European Championship takes to our driver the fifth continental title, first one in the category with the gear. The titles of Ardigò, were all titles obtained with OTK Kart Group material and teams.

The steady performance of our chassis and driver is highlighted by the presence Ardigò always on the podium, and other than the successes (Essay and Genk), Marco was on the podium also in Zuera, therefore this title doubles the one in 2015, in the same league, and same category. A record that is undeniable source of satisfaction for the Racing Team’s staff.

In the Belgian race the protagonist was Clément Novalak, who finished the heats with an excellent second place and confirmed to be at the top winning the pre-final 2. In the final Clément has revealed his talent, making the most of a perfect chassis, and after a difficult start, where he slipped to fifth place, did not give up, and took the lead, finally, on the fifteenth lap. The deserved victory of Novalak came on the podium next to the presence of another Tony Kart-Vortex, Alexander Smolyar’s (Ward Racing). Very good was also the performance of our other two drivers, Jean Baptiste Simmenauer, sixth after an excellent comeback, and Guido Moggia with the thirteenth place. The latter has recently made the difficult jump in class, from OKJ to OK, and he’s getting familiar with the new class, to the point of having run one of his most exciting prefinals of the Belgian weekend. Started from the thirteenth position, Guido has made ten overtakes in the pre-final, closing it in third place and winning the third row in the final lineup.

The overall weekend result of the category with the gear saw two Tony Kart-Vortex chassis on the podium. Drivers were John Norris (KSM Schumacher Racing Team) and Paul Besancez (Goudant Team). Analysing the performance in detail, the result does not reward the quality of our material and those of teams employing our products, which performance could be better.  As for the Racing Team’s driver Luca Corberi, he had good chances to do well in the final, but had to stop in the very beginning of the final, where he jumped from the sixth place, after having run the heats in the leading positions and closed the pre-final in third place. He thus missed his opportunity to fight for the European title. Disappointed were also other teams employing our material, as in the case of Leonardo Lorandi (Tony Kart-Vortex. Baby Race srl), who finished in third place, but was then penalized for an infraction with yellow flags.

In the cadet class our drivers had a weekend on and off and, as often happens in this category, most of their rivals were at the wheel of made-in-Prevalle material.
Charles Milesi won one of the heats, closing the first phase of the qualifyings in sixth place overall. Vidales and Marseglia suffered form an unlucky heat, in which both were delayed.

In the pre-final all three of our drivers raced very well, especially Marseglia and Vidales have recovered some positions gaining the seventh and eighth row in the final grid respectively. Milesi jumped from the box number twenty.

In the final the fight for the partial success and for the title was between Kenneally (FA Kart-Vortex. Ricky Flynn Motorsport) and Martins (Kosmic Kart. VDK Racing). The winner of the race was the latter, while the European title was won by Kenneally.