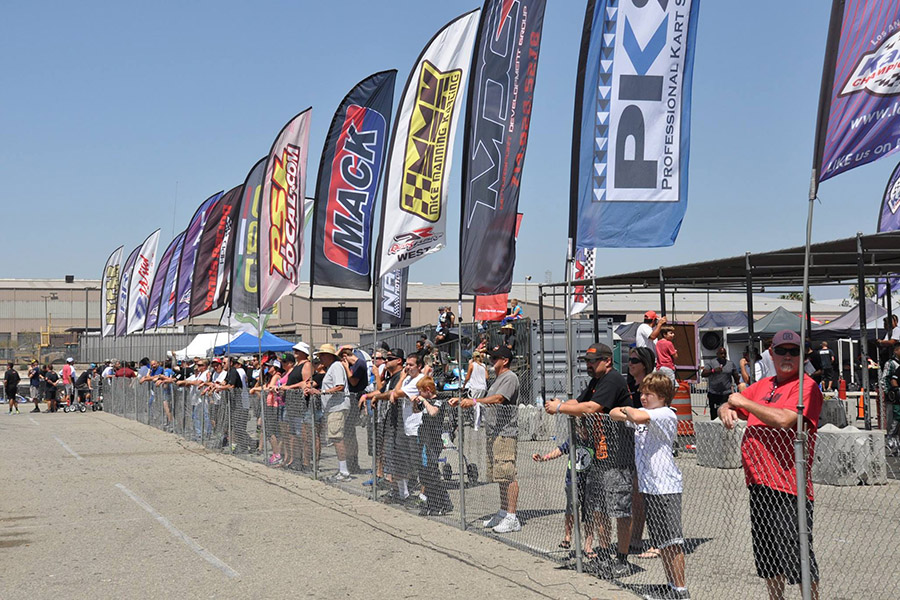 The month of July brought some hot temperatures and intense racing for the sixth round of the Los Angeles Karting Championship. Just over 160 entries converged on the CalSpeed Karting Center to take on the ‘Sportivo’ layout of the Fontana, California facility. Many competitors used it as a warm-up event for the Superkarts! USA Pro Tour SummerNationals, while continuing the championship chase with just three more rounds of racing left on the 2016 calendar for LAKC.

The 2 Wild Karting X30 Pro rejoined the regular program following the LAKC Pro Show last month, welcoming 22 drivers. Colby DuBato watched from the sidelines last month, moving up to the Pro division on the weekend to claim his first victory of the year. Carlee Taylor set the pace in qualifying with a 42.560-second lap ahead of DuBato and point leader Nicky Hays. After DuBato led the opening lap of the Prefinal, Taylor took back the top position until Hays assumed the top spot late in the race to claim the win. Hays used the pole position to lead the first four laps of the main event. DuBato slipped by for the lead and never relinquished the position for the remainder of the 18-lap event. At the checkered DuBato took the victory by a half-second over Hays with Taylor completing the podium. Christian Brooks ended up fourth with Cody Kelleher in fifth. The 2Wild Karting X30 Intermediate welcomed another first-time winner with Robby Stanovich dominating the main event. The margin of victory was over five seconds ahead of Gino Alfonso-Maculey with top qualifier Tyler ReviereVerninas in third. Joey Paonessa and Michel Manning completed the podium. 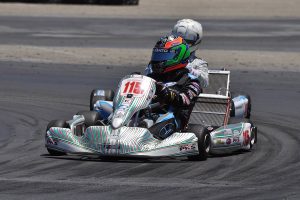 It was a photo finish in the P1 Engines Mini Swift division between Dominic Gorden and Daniel Inzunza. Kasey Gillis was the driver to beat throughout the day as the top qualifier and Prefinal winner. Gillis was shuffled outside the top-10 on the opening lap with Bryce Stevens taking over the lead. He was eventually run down and demoted by Gorden and Inzunza. The two went back and forth for the lead in the final six laps. It came down to a photo finish with Inzunza on the outside and Gorden inside. At the line, Gorden crossed first by just eight thousandths of a second. As the two reached the checkered flag, contact was made with Inzunza connecting with the flag stand barrier. Inzunza’s kart went off the racing surface and flipped. Thankfully he was able to walk away with no injuries. Officials penalized Gorden one position for contact, handing Inzunza the victory. Cole Keith Cotham was third just ahead of Dakota Tate and Stevens, just ahead of Gillis.

Trey Brown opened up the season with a win in the Ryan Perry Motorsport X30 Junior category, adding his second of the year to tighten up in the championship chase. Dick Yu and Joseph Daniele were the top drivers through qualifying and the Prefinal, as Brown positioned himself into second after the 10-lap heat race. Daniele and Brown shuffled the lead in the opening six laps until Brown secured the position to drive off for the victory. Daniele finished one-second back in the runner-up spot with Dick Yu third. Point leader Ryan Schartau ended up fourth as Calder McWhinney completed the top-five. 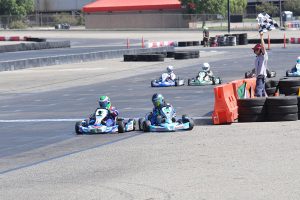 A wild finish ended with Daniel Inzunza flipping over and declared the winner in Mini Swift (Photo: KartRacerMedia.com)

Former champion Erik Jackson went from zero to hero in the Mike Manning Karting TaG Master class. After he was removed from the qualifying results, Jackson started last in the 10-kart field for the Prefinal. Top qualifier and championship leader John Crow won the race with Jackson climbing to second. Jackson got the jump at the main event green flag, and never looked back to lead all 18 laps for his third straight victory. Crow ended up second with Gary Lennon completing the podium. Tony Rossetti was fourth with Vatche Tatikian in fifth.

Royal McKee jumped back to the top of the podium in the Musgrave Racing Company S3 Novice Stock Moto division with a sweep of Round Six. McKee set fast time in qualifying while going on to win the Prefinal and Final in dominating fashion over the 11-kart field. Anthony Fontana beat two-time winner Garrett McKelvie for second with Zoli Sule and John Nielsen rounding out the top-five.

Cole Keith Cotham added his third victory of the season in the Fleming Racing Engines Junior 1 Comer division Sunday, extending his championship lead. Cotham qualified second behind Aden Dodge before going on to win the Prefinal. Dodge retired early in the main event with Cole Morgan stepping up to challenge for the win. Morgan took the lead from Cotham at lap nine, with the point leader waiting until the final lap to make his move. At the checkered flag, Cotham took the victory over Morgan. Kasey Gillis won the battle for third over Rylee Martinez and Steven Grafton. Gavin Perez secured his second straight victory in Sanner Racing Junior 1 Comer Pilot class over Alex Estes and Kaytlyn Schwartz. 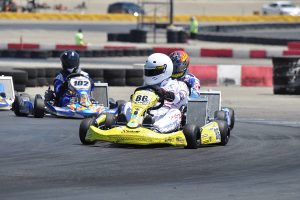 Erik Jackson drove through the field for the victory in TaG Master (Photo: KartRacerMedia.com)

Ricco Shlaimoun became the second two-time winner on the year in Mack Motorsports PRD Junior 2 class. Shlaimoun came on late in the day, saving his best for the main event. Top qualifier and Prefinal winner Mia Butts led the first five laps until Shlaimoun took over the lead position. He went on to lead the remainder of the 18-lap Final for the victory. Brendon Cramer drove to second as Butts fell down to sixth behind Zachary Abdollahi, Brenden Delorto and point leader Jordan Turner.

The win streak is now up to five for Chris Curtis in the Professional Kart Support S4 Super Master Stock Moto division. With nine drivers, the category welcomed its largest field on the season. Curtis kept pace with top qualifier and Prefinal winner Sean Bond. With two laps remaining in the main event. Curtis took over the lead to drive his way to victory #5 of the season. Bond settled for second with Phil Conte joining them on the podium. Ron Rossetti and Carl Lewis rounded out the top-five.

Adding to his win total in the Empire Karts Micro Swift class was Cooper Hicks. With a sweep of the day, Hicks drove to his fourth victory on the year. The gap was nearly five seconds back to second place AJ Matheson with Mathias Coito in third. Brodey Vicars won for the first time since Round One in the freem Honda Kid Kart category. Point leader Logan Ainsworth set the pace in qualifying and the Prefinal. Logan Chambers took over the top position in the main event early on until Vicars secured the position on lap five. John Antonino followed through but was unable to make a challenge for the lead, placing second behind Vicars. Ainsworth ended up third with Chambers back to fourth over Truly Adams. 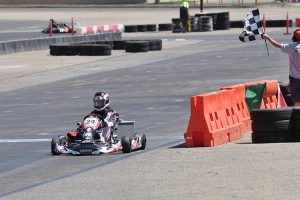 Open Shifter welcomed Willy Axton to the list of winners for 2016 (Photo: KartRacerMedia.com)

The Phil Giebler Racing Open 125 Shifter championship chase became closer thanks to Willy Axton notching his first victory of the year. Point leader Slava Prikhodko posted fast time in qualifying and won the Prefinal with Axton retiring early in the heat race. The second-place driver in the championship standings knifed his way through the Open and S4 Super Master field to reach Prikhodko late in the Final. A last lap pass secured the lead and the victory for Axton, pulling out to a 1.8-second advantage in the final circuit. Tyler Coffman, Troy Butts and Vivek Tandon completed the top-five.

Alan Michel shook things up in the CRG SoCal S2 Semi-Pro Stock Moto championship chase by sweeping the weekend. In only his second start on the year, Michel swept the day’s action while preparing for the Superkarts! USA Pro Tour SummerNationals. Gianfranco Casadei and Robert Heck Jr. stole the remaining podium positions ahead of championship leader Chandler Campbell with Joshua Young in fifth. 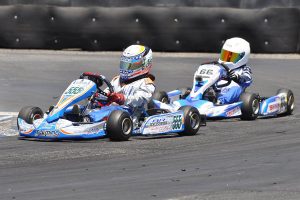 It was another triumph by Cole Keith Cotham in Junior 1 Comer (Photo: KartRacerMedia.com)