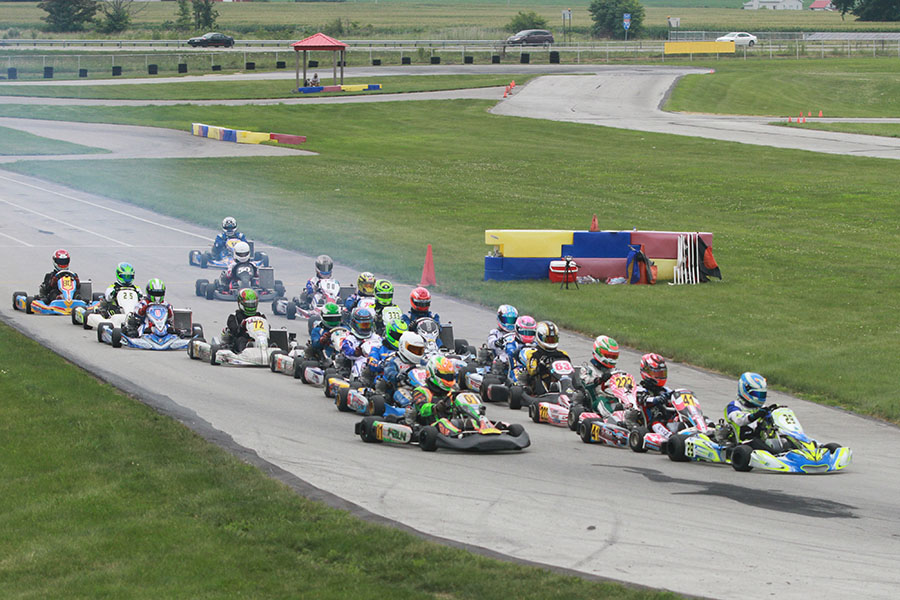 We spend our entire raceday up in the tower, watching every on-track session as we produce our EKN Trackside Live program, so not much time is spent roaming the paddock for the stories. The ‘From the Tower’ column is our chance to delve deeper into some of the stories that develop over a race weekend, those that may or may not have been included in the daily race reports. For complete coverage of the WKA Manufacturers Cup Series for the first of two trips to the New Castle Motorsports Park, visit the EKN Event Page – DC

With the busy schedule, we had to delay this column until after SummerNationals, but wanted to point out things we saw during the July 15-17 event. It has been since the middle of 2012 that I covered the WKA Manufacturers Cup Series. The start of the 2016 season rekindled the relationship between EKN and WKA, as we brought full coverage of the Daytona KartWeek event this past December. I was there, just not in a working capacity, enjoying it as a racer. Due to scheduling conflicts, we were not able to attend the GoPro Motorplex event in April. 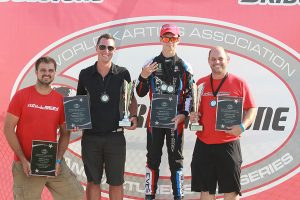 Braden Eves swept the four main events in the Senior categories, the first driver to do so on the year (Photo: EKN)

It was great to enter the paddock Friday for the opening day of the New Castle event. It was full of many familiar faces we had seen throughout the last four years, including a number of new families enjoying what the Manufacturers Cup Series is offering. It has been a busy year for the World Karting Association with the introduction of the Winter Cup and a competitive five-event Manufacturers Cup Series. Buddy Long has returned to the organization, and is keeping the program rolling as the operations manager. Long has a true passion for the sport, and wants to see good things continue with the organization and its members.

It was an impressive weekend for Ohio driver Braden Eves, as the second-year Senior driver swept all four main events on the weekend. Eves went double-duty as he has for the WKA Manufacturers Cup this season, entering New Castle with just one podium in the Pro IAME Senior and two in Yamaha Senior over the four rounds of competition. Eves has seen a lot of success at the New Castle facility, and added to it. Saturday in IAME, the MDD / Kosmic driver swept the day, and earned maximum points once again with fast time in qualifying and winning the main over heat race winner Austin Garrison. The Yamaha category was just as hard fought, with a number of drivers in contention all weekend. Eves came away with fast time in qualifying and the main event win after an intense battle for the victory. Braden then swept Sunday’s round of racing, capping it off with a photo finish over EKN June 2016 Driver of the Month Dakota Pesek. Eves now leads the IAME championship and trails Brandon Lemke by 45 points in Yamaha heading to Pittsburgh. 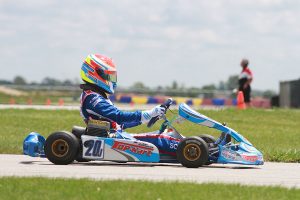 Nicholas d’Orlando and John Paul Southern made it a sweep of the Junior categories at New Castle. For d’Orlando, it was his best weekend since rejoining J3 Competition, now piloting the CompKart chassis. The New York driver made the move in June, and had not yet performed at his best. Joined by west coast CompKart driver Dante Yu, the duo went 1-2 each day with d’Orlando getting the edge both days.

Southern is still recovering from an opening round practice crash at the SuperNationals in November 2015. JP suffered injuries to both feet, requiring a number of surgeries with still one left on his recovering schedule. He made his return to karting in April at the Mooresville WKA event, winning the Yamaha Junior main event on Saturday before sitting out Sunday. The Ohio driver has continued to rehab and is coming back even stronger as the weekend in New Castle proved. Southern showed his strength at the end of each round, nipping his challengers at the checkered flag for both main event victories. His performances has put him into contention for the championship should the success continue. 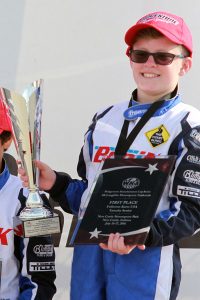 Reece Gold is leading the Benik charge in the Cadet divisions (Photo: EKN)

The Benik chassis has taken Cadet racing in North America by storm, with a large percentage of drivers making the switch to the relatively new brand. One driver under the factory Benik team has stood out among the others – Reece Gold. The Florida driver made his WKA Manufacturers Cup Series 2016 debut at New Castle, having shown success in many other programs already this season. His composure behind the wheel is equivalent to that of former Cadet stars, like Dylan Tavella, Brandon Lemke and Sage Karam. Gold drove to the victory both days, including a beat down Sunday for a five-second advantage while they fought behind him for second. Just into the month of July, we can expect to see more victories under Gold’s resume as the year continues.

The only main issue throughout the weekend came during the re-qualifying of the Yamaha Sportsman division Saturday morning. There was confusion between what the competitors were told during the driver’s meeting and what the grid personal said to drivers just before hitting the track. A number of complaints went toward the officials following the session, and they elected to re-qualify the class at the end of the qualifying round. This situation helped some and hurt others, just like any decision of this nature would.

It all stems back to policing, or trying to police, bump drafting in qualifying. Rule 212.11.1 states that pushing during a qualifying lap may result in a lap time being removed from the session as a penalty. WKA recently revised this to allow for pushing down the straight line, however, contact through corners or causing a collision will be deemed as avoidable contact with a penalty assessed. Each category was lined up for qualifying based on the final session of Friday practice. This helped to put the quicker karts at the front and the slower at the back to allow for a cleaner session. Penalties were assessed to drivers who slowed on the course and waited for certain karts, thus impeding others. 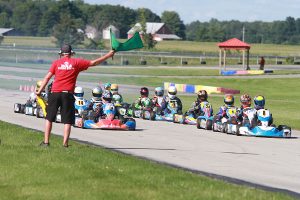 Starts throughout the weekend were clean in every category (Photo: EKN)

One positive that was seen throughout the weekend was how clean the starts were in the opening corners. A slow pace and very close to the opening corner is where head flagman Jake Tretow. While the system has been tried, it all depends on the drivers respecting each other to make it through the opening corners safe and without incident. This weekend, they did just that, including the young Cadet racers with over 30 karts in the field and all other age groups.

The series returns to action on August 19-21 at the Pittsburgh International Race Complex in Wampum, Pennsylvania. The ‘Alan Wilson Circuit’ was just repaved, making the 8/10-mile course smooth and super fast for Round Seven and Eight of the WKA Manufacturers Cup Series.