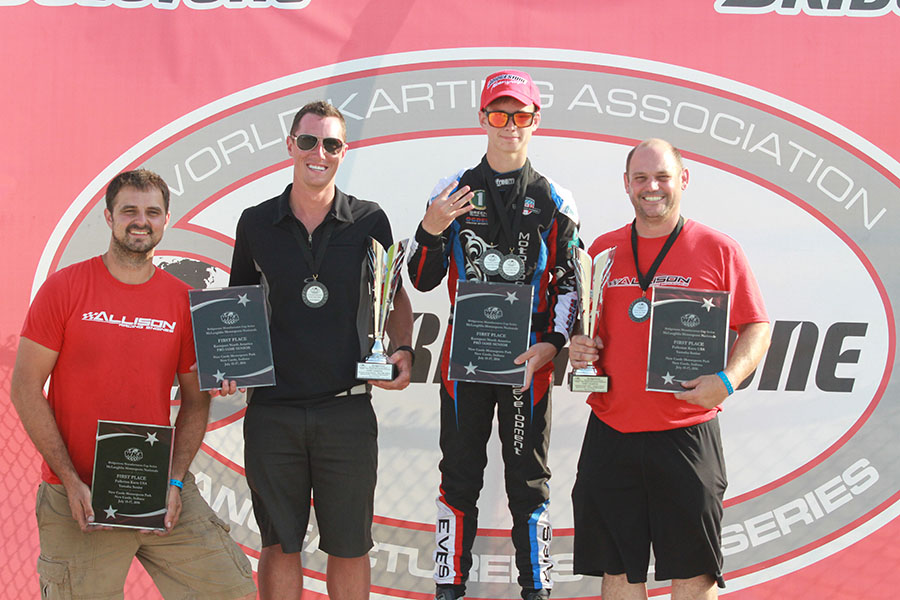 The final day of the McLaughlin Motorsports Nationals completed at the New Castle Motorsports Park. The sixth round of the WKA Manufacturers Cup Series wrapped up Sunday at the Indiana facility, escaping the threat of rain late in the day to complete qualifying, two rounds of heat races and the main events for the eight categories competing on the weekend. The weekend were marked with double winners in a number of the age levels, including Braden Eves winning all four Senior main events.

Eves (MDD / Kosmic) was the target throughout Saturday in the KartSport North America Pro IAME Senior class. It became Austin Garrison on Sunday as the CompKart driver won each of the heat races after Eves set fast time in qualifying. Garrison was able to get away from the 23-driver field when the green flag waved to begin the 16-lap main event. Eves was able to reclaim the second spot after dropping to third, and cut into the lead Garrison established. Eves took over the lead on lap 10, and the two ran nose to tail the entire way. Garrison was unable to match the straight speed of Eves heading to the checkered flag, with Braden crossing the stripe first for the victory. Robby Seward (Birel ART) rebounded from a DQ on Saturday to drive his way to a third-place podium finish at his home track, beating out Alexander Kardashian (Top Kart) and hometown driver Zach Holden (Tony Kart). 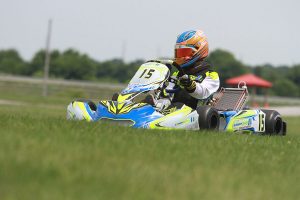 It was another close battle in the Fullerton Karts USA Yamaha Senior division, decided by three drivers in the end. Eves swept the on-track action leading up to the main event, with a group of drivers right behind him all day. Four drivers took a turn at the point, including Alexander Kardashian (Top Kart), Brandon Lemke (Merlin) and Dakota Pesek (Top Kart). Kardashian lost the driver in the closing laps, leaving just the three others to decide the winner. Pesek led as the field took the white flag and Eves waited until the final straight to make his move. Pesek went inside, and Eves drove around him on the outside, crossing the line six hundredths of a second ahead for the victory. Lemke finished third with Kardashian fourth and Mike Giessen (Merlin) – subbing for Jake Venberg – in fifth.

Saturday winner Nicholas d’Orlando (CompKart) spent the day out front in the Woltjer Racing Engines Pro IAME Junior class. He was joined at the front in the main event by CompKart teammate Dante Yu and Utah driver Payton Durrant (Tony Kart). The trio broke away from a six-driver lead pack that diced it up early. The CompKart drivers worked together with Durrant holding on. Yu set the pace for the majority of the race until d’Orlando took over the spot with just a few laps remaining. No one made a move, waiting for the final run to the checkered flag. Durrant dove at the I-70 corner, inside of Yu, giving d’Orlando enough space to reach the checkered flag unchallenged for his second victory of the weekend. Yu held on to finish second with Durrant in third. Max Peichel (Top Kart) won the battle for fourth, with he and Sam Paley (Tecno) crossing the line nearly identical and the edge going to Peichel. 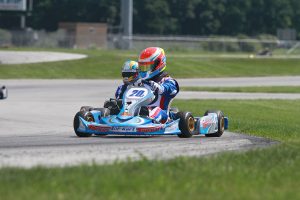 John Paul Southern is back to 100% behind the wheel, doubling up in Yamaha Junior (Photo: EKN)

The FranklinKart.com Yamaha Junior class welcomed a double winner as well with John Paul Southern earning both victories. JP (Top Kart) set fast time in qualifying and won the opening heat race, falling to second behind Sam Paley (Tecno). In the main event, the lead challenger to Southern was Tyler Ferris (Top Kart) as the New Jersey driver led for a few laps before JP took back the position. Ferris kept to Southern’s bumper, making a run for the win down the final straight. At the line, it was just 16 thousandths of a second as Southern landed his second victory of the weekend. Ferris was a close second as Colin Neal (Tony Kart) drove his way to a third-place podium finish. Paley fell to fourth with Pauly Massimino (Top Kart) in fifth.

No one could match the pace set by Reece Gold in IAME USA East Pro Swift Sportsman. The Benik driver swept the day toward his second victory of the weekend. The 34-driver field could not keep it close, as Gold drove to a five-second advantage after 14 laps of racing. The battle was for second with Santiago Trisini beat out Tyler Maxson, making it a Benik podium. Anthony Willis made it Benik in the top four, beating Rylee Engles (Tony Kart) for fourth. 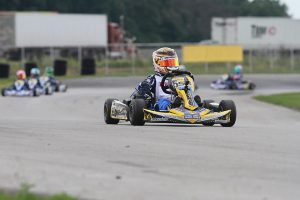 Kaden Wharff became the second driver to win his second in the Allison Racing Engines Yamaha Sportsman class. Madison Campeau (Top Kart) and Caleb Bacon (Parolin) led the field to the green flag, joined by Top Kart driver Wharff and Logan Adams (FA Kart). Campeau led the first half, with Adams taking it the second half. Wharff put himself into the second position late, setting up for a run to the checkered flag. Adams tried to keep Wharff behind, unable to reach the checkered flag first with Kaden landing the victory. Sam Hinds (FA Kart) took advantage of heavy racing late in the race, climbing to the third step of the podium ahead of William Robusto (CompKart) and Campeau.

There was no way to predict the outcome of the CRP Racing Mini Swift finish on Sunday. Saturday winner Jeremy Fletcher (Tony Kart) was the top qualifier and Heat #2 winner with Indy driver Elliot Cox (Benik) taking the win in Heat #1. They were among a five driver lead pack in the main event including Eli Trull (Fullerton), Caleb Gafrarar (Parolin) and Danny Dyszelski (Energy). Fletcher led the majority of the race with Cox attempting to break away a few times. The fight for the win came down to the checkered flag with Cox edging out Fletcher by just 21 thousandths of a second. Gafrarar stole third away at the line from Trull and Dyszelski. 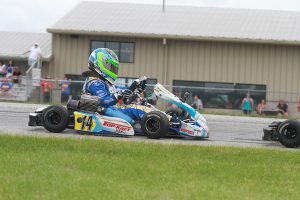 It was a great main event for the Water for a Cause Kid Kart class. Previel Perkins secured the pole position and never relinquished the position in the 14-lap main event. Indy Ragan put the pressure on all race long with Tristan Young waiting in the wings. No change for position occurred with Perkings taking the checkered flag first. CJ Bowman was alone in fourth with Karsyn Walters in fifth.