Eves does the double in IAME and Yamaha 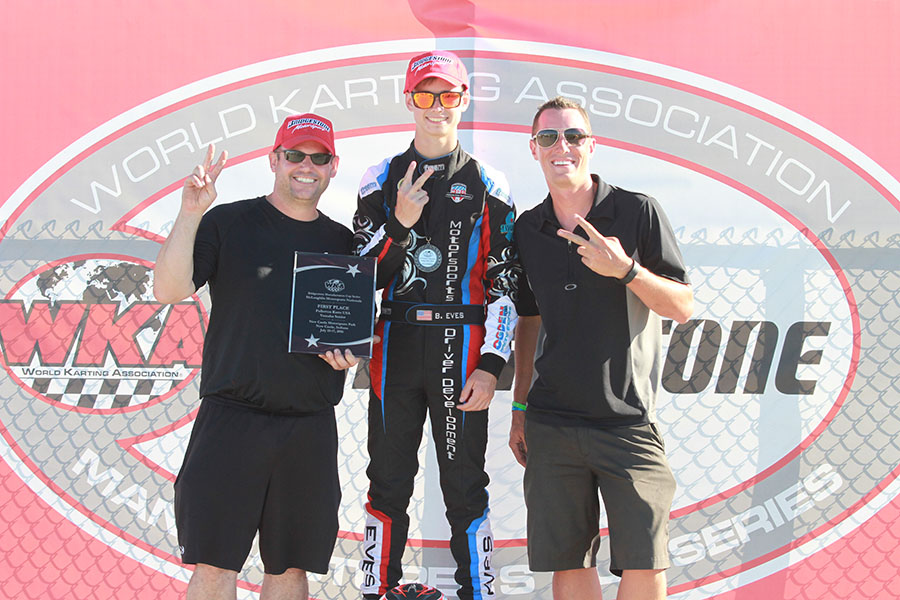 Saturday hosted the fifth round of the 2016 WKA Manufacturers Cup Series, the first of two rounds contested at the New Castle Motorsports Park. With a full day of racing action around the New Castle, Indiana facility, eight different categories contested qualifying, two heat races and a main event to decide the winners under perfect weather conditions for racing. Among them was double race winner Braden Eves with a near sweep over the two Pro Senior categories, taking the victory in both IAME and Yamaha on the day.

The KartSport North America Pro IAME Senior was a sweep for the MDD / Kosmic driver. Eves finished every on-track session at the top of the result sheets. Eves set fast time in qualifying and was the top finisher in both heat races. He led the field to the green flag for the 16-lap main event, with early fighting for the top position. Eventually, Eves reclaimed the position and was able to drive away to a 3.5-second advantage for the victory. The fight for second became four drivers after Zach Holden (Tony Kart) and Max Hewitt (CompKart) pulled away. Brandon Lemke (Merlin) charged forward after starting toward the back following a DNF in Heat #2. At the checkered, Lemke secured the position from holding by just 56 thousandths of a second. Holden settled for third ahead of Hewitt with Robby Seward (Birel ART) crossing the line in fifth, but was removed from the results after a engine tech issue. That promoted Brandon Jarsocrak (Praga) to the fifth spot. 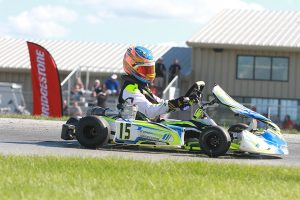 Eves ended the day with a second victory, securing the win in the Fullerton Karts USA Yamaha Senior. The Kosmic driver drove to fast time in qualifying and won the opening heat, only to see June EKN Driver of the Month Dakota Pesek (Top Kart) edge him in Heat #2. Those two worked together to pull away from the field in the 14-lap main event, only to get run down by Brandon Lemke (Merlin) and Alexander Kardashian (Top Kart). The fight for the win went into extreme mode in the final few laps, as the drivers diced for the top position. Coming to the line, it was a two by two with Eves edging out Lemke by three hundredths of a second. Kardashian crossed in third with Pesek in fourth. Championship leader Nick Landi (FA Kart) finished fifth, just ahead of Mike Giessen (Merlin), subbing for Jake Venberg (Merlin) after he broke his collar bone in a Heat #2 flip.

The Woltjer Racing Engines Pro IAME Junior class came down to a battle between CompKart driver Nicholas d’Orlando and Dante Yu. The two came on at the end of the day, placing 1-2 in Heat #2 to start the main event on the front row. They both were able to get away from the field early on, pacing the entire 16-lap distance. It appeared that Yu was holding back, waiting for his moment. A last surge toward the checkered flag came up just short for the Californian, with D’Orlando earning his first win on the season. The fight for third went to the final lap, with Max Peichel (Top Kart) crossing the line ahead of Sam Paley (Tecno) and Myles Rowe (Tony Kart). 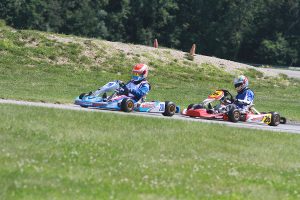 Zach Pretorius (FA Kart) was the driver to beat early on in the FranklinKart.com Yamaha Junior category, posting fast time in qualifying and winning the first heat. John Paul Southern (Top Kart), still recovering from an incident in November, was outside the top-10 in qualifying but drove his way to the front and the win in Heat #2. JP, Pretorius and Sam Paley (Tecno), who was 26th in qualifying after not completing a lap, made up the lead group in the 14-lap main event. Pretorius eventually lost the draft, leaving Southern and Paley to decide the winner. Southern was able to hold off Paley at the line by 72 thousandths of a second. Pretorius settle for third over Tyler Ferris (Top Kart) and Connor Cass (Merlin).

Reece Gold continued his reign at the front of the IAME USA East Pro Swift Sportsman class, as he has for much of the 2016 season. Gold set fast time in qualifying, falling back as Benik teammate Elio Giovane won both heat races. Three drivers broke away from the 31-kart field including Gold, Giovane and Kaden Wharff (Top Kart). Giovane lost the draft of the top two, settling the race with a photo finish. Gold crossed the line first by just 18 thousandths of a second. Giovane was alone in third with Tyler Maxson and Luca Mars making it four Benik drivers into the top-five. 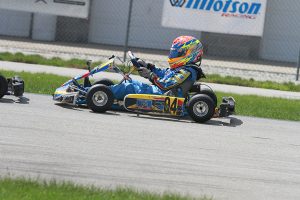 Garrett Adams (FA Kart) landed his first WKA Manufacturers Cup Series victory today in the Allison Racing Engines Yamaha Sportsman. Adams won both heat races and had the advantage going into the main event. He and Madison Campeau (Top Kart) drove away from the rest of the field to decide it on their own. Adams took the checkered flag first by 13 thousandths of a second ahead of Campeau. His brother Logan Adams (FA Kart) beat out Kaden Wharff (Top Kart) for the third step on the podium as Nicholas Terlecki (Ricciardo Kart) drove to fifth.

The CRP Racing Mini Swift class went down to the wire with a three-driver fight. Heat race winner Elliot Cox (Benik) was joined by Jeremy Fletcher (Top Kart) and Eli Trull (Fullerton) at the front of the field. The top three drove away in the main event, shuffling late in the race. Contact with two laps remaining between Trull and Cox allowed Fletcher to get away, going on to earn his third victory of the season. Cox crossed the line second ahead of Trull in third. Sofia d’Arrigo (PCR) was fourth with Jamie Newton fifth.

Dusty Larson took his first victory of the year in the Water for a Cause Kid Kart class. He and Indy Ragan went back and forth all 14 laps in the main event, separated by just 0.185 seconds. Karsyn Walters drove to third ahead of CJ Bowman and Tristan Young.