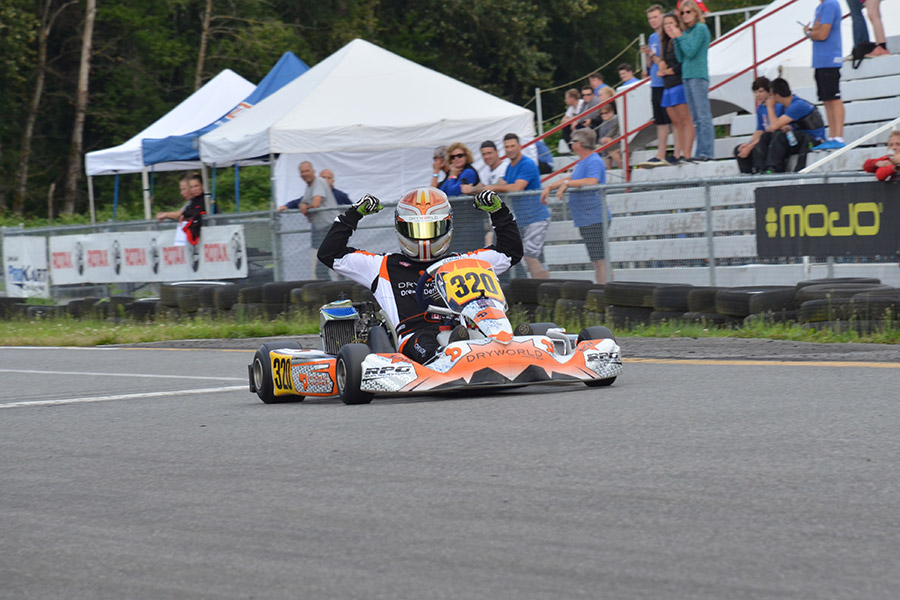 The Can-Am Karting Challenge made its annual trip ‘north of the border’ to the Greg Moore Raceway over the July 8-10 weekend. The Chilliwack, British Columbia facility is among the more prestigious in the northwest area of North America, home to many of the best drivers in western Canada. Competitors in the Rotax Max Challenge, Superkarts! USA, Briggs & Stratton and the new local option Open divisions nearly reached the 100-entry mark each day. A little bit of precipitation hit the area in the weekend, however, all the racing activities were conducted on a dry race track.

“The Can-Am ‘A-Team’ did a phenomenal job once again,” stated series promoter Mike Rolison. “A big thank you to them as they worked tirelessly to pull this event off. Also a thank you to the staff and members of the Greg Moore Raceway who welcomed us with a wonderfully prepared race track and knowledgeable staff to assist our crew. A special tip of the hat to Erik Gerloff for his expertise throughout the weekend. The Can-Am continues to grow and we hope to have a record turnout for our series finale in Canby this September.” 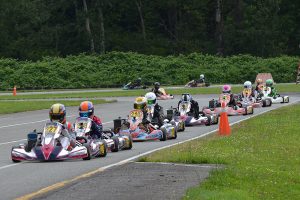 Coltin McCaughan further established himself as the top driver in the Senior Rotax championship and the ticket holder to the 2016 Rotax Grand Finals, extending his win total to four on the season in Can-Am competition. The Canadian defended his home turf with a victory each day to add to his point lead after four rounds. Coltin set fast time in qualifying to beat out the 16-driver field. Fellow Canadian Kellen Ritter used a last lap pass to steal the Prefinal win away from McCaughan. The Final was all Coltin, going wire-to-wire in a near three-second advantage after 20 laps. Kyle Dupell advanced up to second as Ritter fell down to fifth behind Adam Smalley and Ben Maxfield. Dupell continued moving up the order, leading the way on Sunday. A 52.843-lap secured fast time in qualifying ahead of McCaughan, and the Oregon driver led all 14 laps of the Prefinal. The first half of the Final was led by Dupell as McCaughan took over for the second half. Despite the fast laps of the race, Kyle was unable to get around the championship leader, with McCaughan earning his fourth straight victory. Walker Hess stood on the podium with the top-two while Ritter placed fourth and Derek Wang in fifth. 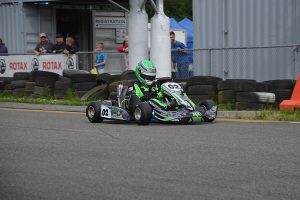 Three wins on the weekend for Ashton Torgerson, two in Micro Max and one in Mini Max (Photo: Dalton Egger – CanAmKartingChallenge.com)

In Junior Rotax, Matthew Taskinen extended his win streak to three following the weekend in Chilliwack. The Canadian swept the weekend to take over the championship lead heading into the series finale. Taskinen edged out Edward Portz by just 82 thousandths of a second for the top honor in qualifying before going wire-to-wire in the Prefinal for the win. Matthew was shuffled back to fifth early on in the Final, but was able to climb back to take the lead from Portz, driving to a one-second advantage at the checkered flag. Hannah Greenemeier worked around Portz for second with Jacob Gulick and Austin Torgerson completing the top-five. Taskinen began where he left off, posting fast time in qualifying and leading all 14 laps in the Prefinal. Greenemeier was the challenger in the Final, leading for just a few laps until Matthew took control and drove away to a three-second margin of victory. Gulick moved up to the podium in third with Round One winner Mason Buck in fourth and Portz placing fifth.

Ashton Torgerson was the only other driver to record a weekend sweep, doing so in Micro Max presented by Go Kart Hero. Torgerson was the class of the field, as he drove to a perfect score on the weekend to keep his series record intact. It was an astonishing 23-second victory over Shawn Kozma and Darryen Hilwa. The same drivers joined Ashton on the podium Sunday, with Torgerson recording a 27-second advantage in the 15-lap main event. Thanks to his age, Ashton is able to race in the Mini Max class, presented by Monster X. Saturday was the second victory on the season in the category for Torgerson. Jonathan Portz edged out Ryan Dezall and Torgerson for fast time in qualifying before driving to the win in the Prefinal. Torgerson was unable to finish, retiring before the first lap was completed and started eighth in the main event. Ashton climbed his way to the lead by lap six, and held off Jason Leung at the line for the victory by nine hundredths of a second. Dezall completed the podium as Portz slipped to fourth. A blistering lap of 55.704 secured fast time for Torgerson by over four tenths of a second during Sunday qualifying. Torgerson went wire-to-wire in the Prefinal, and led the first 10 laps of the Final. Leung and Dezall worked together to demote Ashton for position. At the line, Leung was able to hold off the charging Torgerson for his first victory of the season with Dezall sitting third on the podium. 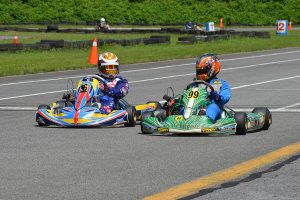 The Briggs & Stratton 206 Senior division welcomed another large contingent of drivers on the weekend, with the wins split by Derek Wang and Brady Egger. The start to Saturday’s events saw Egger with the fast time in qualifying and Wang winning in the Prefinal. The Final was a battle between Derek and Spencer Kunz, with Wang getting the advantage after 15 laps with his first victory of the year. Kunz and Egger joined him on the podium with Vitali Tichikichev and Chris Eagle completing the top-five. Sunday was another epic battle with Kunz landing fast time in qualifying and Kyle Wick the winner of the Prefinal. Wang advanced his way into the mix as did Egger and Tichikichev. On the final lap, Egger secured the victory ahead of Wang and Vitali. Tichikichev was penalized three seconds for a starting infraction, moving Wick to the third step of the podium and Vitali to fourth ahead of Kellen Ritter. Bryan Green went uncontested Saturday in the Briggs & Stratton 206 Masters class, with Erik Gerlof taking top honors over Green Sunday.

Austin Torgerson doubled up in Briggs & Stratton 206 Junior division on the weekend. Saturday was led early by Cooper Becklin, setting fast time in qualifying and winning the Prefinal. Torgerson was able to improve his pace toward the end of the day, working around Becklin late in the race for the lead and the victory. Carsen Kunz followed through for second with Becklin placing third. Sunday was Marco Kacic as the top driver through qualifying and the Prefinal. Kacic would sit out the Final due to illness, leaving the top spot open. Torgerson took over the lead on the opening circuit, challenge by Matthew Taskinen late but able to hold on for the victory. Taskinen retired on the final circuit, moving Josh Pierson to second and Becklin to third. 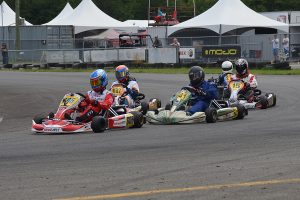 Michael Groff and Chad Wallace each took home a win in Masters Max presented by Rolison Performance Group. Wallace opened up Saturday’s round as the top qualifier before Groff took control, winning the Prefinal and Final. Wallace settled for second with Gary Reohl placing third. The results were the opposite at the front on Sunday, with Groff as the top driver in qualifying. Wallace took over from there to win the Prefinal and score his first Final victory of the season. Reohl was second with Rene Bine III completing the podium after Groff retired on the final circuit.

The TaG Senior class opened up to six drivers on the weekend as Andrew Wilson won his second main event on the year and Zach Pettinicchi earning his first. Kris Hoffbeck set the tone in qualifying and the Prefinal. He led the main event until mechanical issue put him on the sidelines. That opened the door for a new top driver. Pettinicchi and Rosario Verderame fought for the position until Wilson charged forward to assume the spot, driving to the checkered flag first. Pettinicchi and Amanda Smalley rounded out the podium after Verderame retired early as well. Sunday was very similar with Hoffbeck topping the results in qualifying and the Prefinal, this time fighting for the victory in the main event. Pettinicchi was right there, taking the lead away on lap 12. They continued fighting to the checkered flag with Pettinicchi earning the victory. Hoffbeck settled for second with Verderame in third. 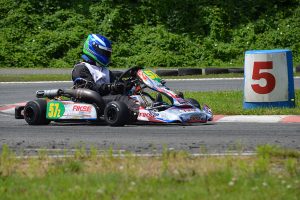 Cole Franchini earned his first victory on the year in the S2 Semi-Pro Stock Moto category, a Superkarts! USA regional category. Championship leader Kyle Wick was the top qualifier while Franchini was able to score the win in the Prefinal. Wick retired early in the main event, giving Franchini a clear path to the top of the podium with the victory. Brennan Peters drove to second with Wick classified third. Wick came back the following day to sweep the action, driving to a 17-second advantage over Peters with Franchini in third. Andrew Wilson was the lone driver in the Open Shifter category, running uncontested both days.

The month of August will be off for the Can-Am Karting Challenge as teams and competitors will gear up for the big series finale, set for the Pat’s Acres Racing Complex in Canby, Oregon on September 9-11. More information regarding the 2016 season can be found at www.canamkartingchallenge.com or on their Facebook page, including videos and photos from the Chilliwack weekend.