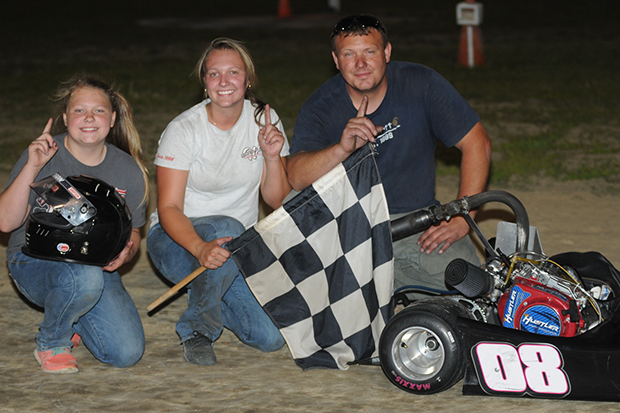 It’s no secret that karting is a male dominated sport. Here and there, there have been female standouts like Danica Patrick, Sara Fisher and Juliana Cheavotti.  Now after last Saturday (June 18th) night a new name has been added to that list-Makayla Johnson. That night, during the final race of round two of the Maxxis Tires ‘Battle at the Beach’ series Pro Clone Heavy, Johnson, of Bridgeville, DE, piloting a privateer machine, took on some of the mid-Atlantic region’s best 4-cycle factory drivers and dominated them.   Along with the joy of beating the boy’s Johnson earned $1,500.00 for her efforts on the Delmar, DE 1/5-mile clay oval. 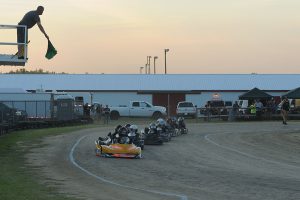 Things were dicey at first.  Johnson earned the pole and owned the early lead.  Then, before half of the 30-laps distance she let several competitors slip under her. But, by no means was she done. Johnson floored her right foot on the gas pedal and guided her kart smoothly through the turns.  Fighting her way back to the front she took advantage of a competitor’s mistake and recaptured the lead before the mid=race signal was shown.  When it was shown she was way ahead of the competition.

Lewes, DE based Alex White was her nearest challenger.  But he was several seconds behind her.  White eventually closed the gap and tried to take the lead from her, but she held fast to the checkered flag beating him to the stripe by 0.243 seconds.  Behind White were some of dirt karting’s legends.  Midlothian, VA based karting veteran Jason ‘Higgy’ Higginbotham, a well-known long time WKA dirt standout, crossed third, 2.371 seconds later.  Further back younger standouts filled the remaining top five positions.  Ty Bass of Pikeville, NC was fourth, 2.586 seconds late followed by 17-year-old Catlett, VA based Brady Penny who capped the top five.

“I want to thank my dad, Richie, Tim, my little sister, Huffy, from Hustler, who builds my motors, and everybody else on my pit crew that helps me,” Johnson credited.  “It feels good getting this win.   I have a lot of people helping me and I thank God for this success.”

The only other female in the field, Ashley Hayes, finished 10th out of the 16-racer-field.   Shane Forrest was sixth across the stripe followed by Matthew Robinson, JP Gates, and Nick Brobst.

In addition to Pro Clone Heavy a Clone Warm-Up class was offered, with a $500.00 purse, to give racers a chance to prepare for the final feature.  Bass won that race plus two others. He took Pro Clone Heavy with a 0.270 seconds advantage over Richie Hornsby.  Higgy was third this time 0.846 seconds late.

“Winning this race is important to the race later tonight,” Bass explained after winning the Clone Warm-Up.  “But we were light in qualifying in Pro so we have to come from 16th.  But with us being that good I feel we can come up there. If we get a couple of breaks a couple of cautions.” 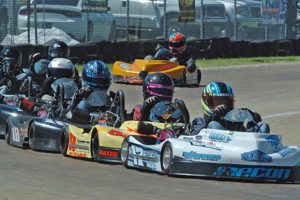 Earlier that Saturday Bass topped Flathead from the pole he earned with a 10.966 seconds rounding that at was a mire 0.025 seconds faster then Higgy’s 10.991 seconds trip.  From there Bass, piloting a Tod Miller Racing Engines powered Charger Racing Chassis, made it look easy as he escaped challengers fighting for positions over two seconds behind him. His closest pursuer was fifth fastest qualifier JD Eversole who trailed by a distant 2.578 seconds. Eversole made an 11.082 seconds qualifying pass for a fifth place starting position.  Kyle Ayers, Penny and Jared Maske filled third, fourth and fifth.

“It’s not as easy as it looks out here,” Bass laughed. “We’ve still got a little room to improve.  They started to get away from me a little at the start. I wish we had something that could take off a little better. I just want to thank Shane and Squeaky and I want to thank Charger Racing Chassis and Tod Miller Racing Engines.”

Races were split into two segments.  Bass bagged his second win of the day in the first segment’s final feature Pro Animal Heavy where he struggled in qualifying. Nick Brobst notched Pro Animal Heavy’s pole with a blistering 10.765 seconds spin. Brandon Galllo was a tick slower at 10.844 seconds.  Bass produced an 11.057 seconds run for the sixth place starting position

Bass battled his way to a distant second and reeled in Brobst with seven laps to go. Once he got to the front he ran away with it finishing 1.283 seconds ahead of Brobst.  Local Zach Bullis, of Millsboro, DE, was third, Gallo grabbed fourth and Macey Thompson completed the top five.

“It was a little bit of experience and a little bit the kart,” Bass credited of his third win. “So I was just waiting my time. I knew I was better then him (Brobst) in turn two. I knew I’d get the run sooner or later.  I just ran behind him (Brobst), I made my move and drove away from there.”

Like Bass local racer Cole Neibert captured a trio of wins that Saturday starting with Segment One where he led Outlaw racers across the stripe with a comfortable 5.718 seconds advantage over Jordon Cropper.

“The Charger Chassis was really hooked up and Bubba Built put a really strong motor on there as always and X Factor Preps, put the right four rubbers on there,” credited the 15-year-ole Greenwood, DE native. “I can’t thank my mom and dad enough for supporting me throughout my racing career.” 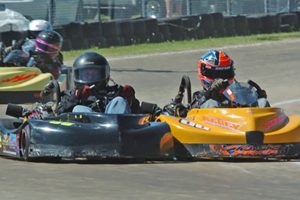 Neibert notched two more wins in the second segment. In Semi Pro Clone he was comfortably 1.720 seconds ahead of Michael Allaband.

“I didn’t know how far ahead of my competition I was. They (his crew) were on the back stretch fence giving me all kinds of signs I didn’t even look at them,” said Neibert who pocketed $250.00 for the win.  “The kart was real good for the first 10-laps and then after that I don’t know if there was something on the track or the tires went away. I think his (Payton Heck) oil comforter came off and spewed oil all over the place.” I don’t know, but it got real squirrelly. It was pretty tricky the last couple of laps.”

Filling in the top five spots behind Allaband were Brobst, Garrett Himminhoefer and David Steele.

“That caution worried me a little bit I didn’t know if I could hold them off or not, but I did!” Reed beamed.  “I was confident I could hold it for the rest of the laps. The kart handled real good. It just got better and better every lap.

“It was good for about 12-13 laps and then the tires just went away,” Neibert said.

Chase Carter spun Junior 1 Rookie’s pole lap in 12.372 seconds and went on to win both feature races wire-to-wire with Jacob Beattie trailing each time by just under two and a half seconds.  Brayden Benson capped the top three both times. 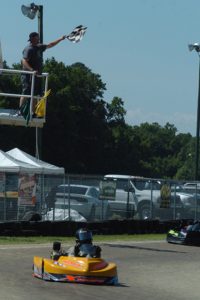 “It was fun,” described the eight-year-old Laurel, DE native. “The Phantom Seraph kart handled good and the Hustler Performance motor was good. I want to thank my dad and my sister, Richie and Rick.”

Brandon Kelly captured two feature wins in the second segment starting with Junior 2 Heavy where he had Spencer Warren nipping at his heals just 0.186 seconds behind him at the stripe.  “Thee 26 kart (Warren) hit one of the disks and that moved him down.  The Triton kart and Higgy’s House of Power motor were good,” said the 11-year-old Lincoln, DE based driver. Kelly thanked Rick Avello and dedicated his first win to the memory of Kelly Kenton.

Johnson and Kelly shared Junior 2 Lite’s front row.  Johnson turned an 11.426 seconds pole-winning lap and Kelly captured the outside front row starting position with an 11.439 seconds trip that was 0.013 seconds off pace.

Piloting a Huffy Racing Engines powered Phantom Triton Kart Johnson quickly left the rest of the field fighting for positions behind him. Kelly and the rest of the pack closed in on Johnson in the final laps threatening him at the stripe where Kelly was a mire 0.013 seconds behind Johnson followed closely by Spencer Warren and Colin James who were 0.026 and 0.205 seconds behind Kelly for the top four.

“The kart was ok, it was kind of bumpy,” Johnson described. “I don’t know what I had over the others, I guess it was power.”

Stratton hustled into the early lead with Lambert trailing a distant second.  With six laps remaining third fastest qualifier David Steele slipped by Lambert for second. Steele closed in on Stratton.  Steele offered several serious challenges but was 0.260 seconds late at the stripe.

As it was last season, Junior 1 Lite has been a very competitive class with eight-year-old Snow Hill, MD racer Logan Shockley leading the show. Qualifying times were separated by a fraction of a second among the top five. Shockley struggled in qualifying turning an 11.771 for an outside row two start. Derrick McGrew spun the pole lap in 11.662 seconds. Georgetown, DE competitor Racyn Hayes earned the outside pole with an 11.065 seconds trip.

Shockley scored PRO Junior 1’s pole, but lost the lead to Ryan McKinney after a wild ride.  A hard charging Shockley was trying to close the gap and retake the lead when caution waved with two laps left. McKinney fought off Shockley’s final challenges and opened another small gap to take the final flag by just 0.497 seconds. Major Pride trailed in third followed in the top five by McGrew and Hayes.

Nick Brobst notched another Animal Heavy win. Piloting a PEC Racing Engines powered Axis Chassis Brobst earned the pole with a blistering 10.853 seconds top-qualifying lap.  From there he shot into the early lead and never looked back finishing a comfortable 2.140 seconds ahead of Millsboro, DE driver Zach Bullis.  Also finishing in the top five were Macey Thompson, Brandon Gallo and Brandon Morris.

“It was a little bouncy in the beginning and sliding,” Robinson reported.  “Then it started hooking up at the end, but I’m pretty happy with it.”

“Being patient was there,” said Penny who was piloting a P&P Speed Shop Jonathan Cash build motor on a Recon kart.  “I was just there to fill in the hole and I got lucky with her slipping up and it coming back to me. Using the bumper helped a little bit you know ,but you’ve gotta do what you’ve gotta do. I just want to thank Jonathan Cash, Bryan Bradford, my parents they do so much and Chip and Todd. The kart was there, it was a little loose in the beginning, but it came around.”

During the scuffle of positions behind Penny and Johnson, Hornsby finished third, White followed in fourth and Brandon Morris rounded out the top five.