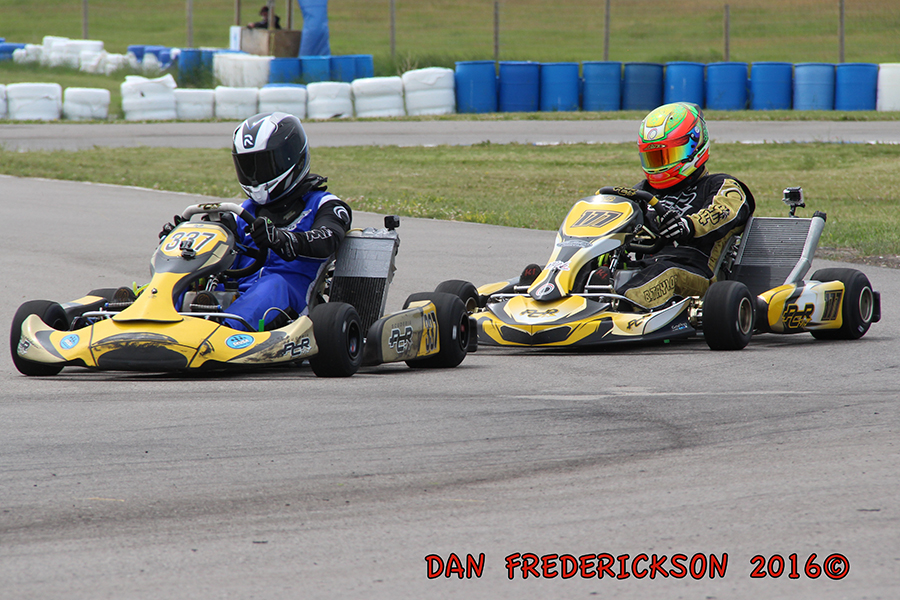 CKRC Race #6 was again challenged by the weather gods with drizzly rain up until mid-day with a few classes running their Pre-Finals on a wet track.  The weather cleared in the early afternoon and a dry track was available rewarding the 68 total entries the rest of the race day.

The 16 kart field was first up having to qualifiy and race the Pre-Final in wet conditions.  Skylar Dunning from Edmonton was the spoiler winning the Pre-Final and Final followed by 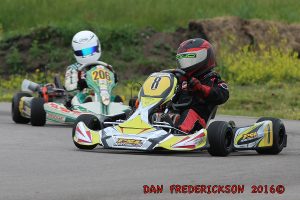 Not much drama here except for a final corner collision sending a few karts into the tire barriers near pit road.

Skylar Dunning’s clean sweep was ruined during a drying track where John Kwong who chose not to qualify and started at the back of the field stormed to the front and held off Dunning for the Pre-Final win.  Kwong could not hold off Dunning and Evan White in the final with Newson losing his chain in the early stages.  The top three finished within 3 seconds of each other. 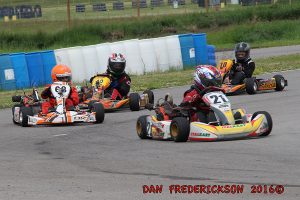 With the rainy conditions, the shifter drivers did not go out for practice or qualifying and relied upon a pea pick to determine grid positions for the Pre-Final.  Starting from the last row, John Kwong had a rocket start going from 11th to 4th before the first corner.  Unfortunately, he went from hero to zero on lap five after hitting a puddle on the exit of the hairpin and having a lazy spin which ultimately stalled the motor.  He re-started and recovered to start 6th in the Final.  For the Final, Brian Taylor got the holeshot and led for the first 2 laps with Bartley taking the lead followed by Taylor, Kwong and White.  On lap 8, Taylor’s GoPro case mount broke and landed in his lap going through Turn 8.  The distraction made him go a little wide and Kwong pounced on the opportunity.  2nd thru 5th finished within 2 seconds of each other.

Kiefer Peet dominated the day taking Pole, Pre-Final and Final convincingly followed by Enzo Sartor and Alexander Berg who worked his way up from 5th to take the final podium spot. 3rd through 5th had a race long battle and finished within 3 seconds of each other.