Behind the Laptop: Taking 4-Cycle Racing Into the New Millennium

Time for all shops, tracks, and clubs to establish a strong base for the sport

There is no doubt that the current craze in the sport of karting is that of Briggs & Stratton 206 racing. In the 90s, it was shifterkart racing, the 2000s were all about Touch-and-Go packages, and this decade thus far has been the resurgence of 4-cycle competition at the sprint tracks of North America. The 206 engine package is the core reason for this rebirth, thanks to its simplicity, sealed bottom end, and standardized engine rules for all age categories from Kid Kart to Masters. It’s now time for kart shops – along with the clubs, tracks, series, sanctioning bodies – to all jump on-board the 206 train. 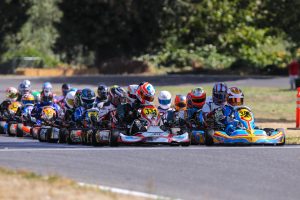 Briggs 206 racing continues to grow across North America at the club and regional level (Photo: CanAmKartingChallenge.com)

For much of North America, the engine package has been accepted as part of the program at the club level, and several regional series have even been established to serve traveling racers who run the 206 engine. The KPX program in NorCal, the Can-Am Karting Challenge in the Northwest, and the 206 Cup in the upper central states are all flourishing with strong industry support. In addition, the WKA Gold Cup series has carried the 4-cycle flag on the sprint tracks for the past few decades and has added the 206 classes to its line-up. The following comment is from former WKA President Randy Kugler, on the history of the Gold Cup program:

In the late 70s, Dan Klutz from Competition Karting came to Canton, Ohio and met with George Kugler about bringing 4-cycle racing into the WKA. It was a win-win for both the WKA and the industry. At first, it was only dirt racing. But before too long, 4-cycle sprint racing came into the fold. Goodyear Tire built a track at their plant in Danville, VA. We ran tracks like Seymour, TN, Darlington, SC, Rockingham, NC, and, of course, the legendary Barnesville, GA. The series had the support of one of karting’s most famous and loyal individuals – Gil Horstman. The series was known as the Horstman Gold Cup for many years. Horstman was the title sponsor and the series was first class with large fields at all the events. Briggs & Stratton was on board with the engine package and great sponsor support as well.

One of the unique aspects of the Horstman Gold Cup was the annual Thanksgiving Day race, originally held at Darlington, and then Rockingham. Through the 1990s, the race was brought to Charlotte Motor Speedway. WKA would cater Thanksgiving dinner to all of the Gold Cup Competitors and their families. It became a tradition.

Through the years, the Horstman Gold Cup became the Coyote Gold Cup with the support of Wayne Wispelaere and Sandy Gregory. To this day, if you get the chance to talk with Sandy, she will tell you that those seasons in the Gold Cup remain near and dear to her heart.  We ran tracks like Circleville, Ohio, Jacksonville, Florida, Chestertown, MD, Camden, Ohio and many, many more were supportive of the Gold Cup. 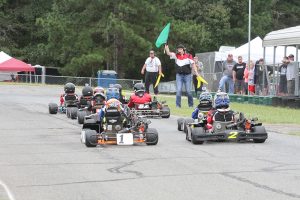 WKA Gold Cup is the major 4-Cycle traveling series along the eastern half of the United States (Photo: Double Vision Photography)

Looking back at the racers who came through the WKA Gold Cup, you’ll see names like Jerry Neadau, Jason Keller and Casey Atwood of NASCAR fame, along with IndyCar champions Ryan Hunter Reay and Sam Hornish.

For a number of years, full bodywork has been the norm in the Gold Cup series, at all age levels. Recently, Gold Cup chassis rules were adapted to welcome the ‘European’ style of karts with CIK bodywork, including the wider overall width compared to the ‘American-made’ karts. Looking at the grid, however, it seems the standard kart of today is either not welcomed.  Even though the rules have been opened to allow CIK karts to compete, the Gold Cup is not attracting competitors running that style of bodywork.  This is an issue, because there a huge fields of CIK 206 karts running all over the country.

Is this an issue of a perceived imbalance of aero performance?  Do people think that they need to have a big nosecone on their CIK karts to compete with the WKA formula?

Many will say, “just slap on a full nose cone and come race”. Coming from the road race world, I can tell you that it is easier said then done. Today’s customers are much different from those of two decades ago, and they continue to want the ‘get in and go’ experience. Most are not interested in spending hours in the garage working on their kart, or machining parts to custom fit certain items. They want to jump in the seat and go when they want, with little to no work needed. I’m sure that this is not the case with every new racer getting into the sport, but why else would they just not bolt on a full nose and go racing at the Gold Cup level?

A recent rule change regarding the 2017 WKA Winter Cup has sparked some discussion on the social media networks regarding the long argument of full bodywork versus CIK-style bodywork. WKA Trustees voted to change the chassis/bodywork rule structure to follow that of the rules set in the Manufacturers Cup Series section of the tech manual. This means that a full nose and laydown seats will not be allowed at the 2017 Winter Cup program for the Briggs 206 categories, while at this point, 2017 Gold Cup rules remain unchanged. 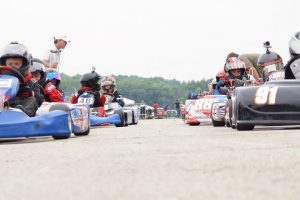 How do we make it so that new style karts can compete with old style karts at the Gold Cup level (Photo: 206Cup.com)

As one of the WKA Trustees who was opposed to the change, let me tell you why. Based on my experience in four years of racing the 206 at Rock Island, and my long history with road racing, I believe that it doesn’t matter what bodywork you have on your kart when it comes to sprint racing with Briggs karts. The 206 engine is not going to reach speeds where you will gain a half-second by just strapping on a full nose cone. Does it help in a straight line? Sure. But until you are dropping in consistent lap times within one-tenth of separation over a period of 10 laps, a nose cone is not going to take you from outside the top-10 onto the podium. If you want to get faster, focus on how to be a better driver and learn to make the chassis work to be more consistent for you as a driver.  The combination of WKA and CIK bodywork worked in Daytona for the dual Manufacturers Cup/Winter Cup event as over 40 drivers raced together, and it’s working at the regional level with the 206 Cup in the upper Midwest area, and mixing of bodywork is doing just fine at the 40+ club races at New Castle Motorsports Park.

Looking at it from the other side, I do believe that it’s about perception. People see the nose and the laydown seats, and are focused solely on that. A new racer comes in and sees the ‘Gold Cup’ kart package, and then sees the karts posting faster lap times and the ‘assumes’ that’s the reason they are faster. I get it. What they don’t focus on is who is in the driver’s seat. Many of these frontrunners are drivers who have laps upon laps in the same kart and same style of chassis. Driving a ‘Gold Cup’ style kart is not easy, and going to a local race recently, I can see ‘newbies’ struggling with it even after multiple weekends. Everything west of the Mississippi runs CIK bodywork only and have no idea what a full nose cone looks like. It’s the same for Canada where they are 100% behind the 206 engine program, and they hosting 30 or more drivers in their fields at the local level and at the national championships with quality drivers and tight racing. Just like Briggs has done with the spec engine package, maybe we need to make the karts appear to be similar with the same style of bodywork and type of seat. 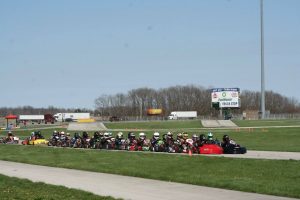 Spec is nothing new to racing. It happens at the grassroots level and all the way to the top. Look at the Spec Miata in SCCA Club Racing. The car and engine are exactly the same across the board. It’s what they do behind the wheel that makes the difference. The entire Mazda Road to Indy program runs spec chassis and spec engines, from US2000 up to Indy Lights. Sportscar racing has the LMPC category as well, utilizing the same car and engine in all entries.

Rather than looking to the past, we need to look to the future, and what will help the sport five to 10 years down the road. The Briggs 206 is perfect for club tracks all across the country, and we are seeing the numbers grow through the Briggs Weekly Racing Series as it has already increased by 15% from this time last year. Unfortunately, I don’t want to see exclusion of the style of karts competing. I’ve seen it happen in the road racing world. When the TaG explosion was taking place, and all shops were selling were the ‘Touch and Go’ engine packages. People wanted to bring them road racing. The lone barrier was the braking system. WKA required dual-braking system on each and every kart for safety reasons, and as we know, sprint karts do not come with a dual system unless they are a shifterkart. Instead of putting in a few hundred dollars and a couple hours of work to follow the rule, racers just ignored that side of the sport. What could have been an introduction of new people to that form of karting did not occur, and now road racing numbers continue to fade with the lack of new racers.

Part of that problem is the kart shops. Today, you don’t see anyone selling the ‘road racing’ experience, and looking at the numbers, no one is selling the ‘Gold Cup’ program. These genres of karting are based mostly on regular racers who haul their own equipment, work without a paid tuner, and just enjoy being at the racetrack. The great thing about karting is you can have all come together and race against one another. We have seen it all the way to the top level with USPKS, WKA Manufacturers Cup and SKUSA competition.

We need to continue to help grow the grassroots movement to build the numbers at the local and club levels. Not all racers are interested in the high profile events or spending the extra money to compete in what is considered a ‘national’ event. The more racers we have at the local tracks, the more regional and national events can entice them to come and race their program.

5 thoughts on “Behind the Laptop: Taking 4-Cycle Racing Into the New Millennium”