CRG at the European Championship: What a Performance 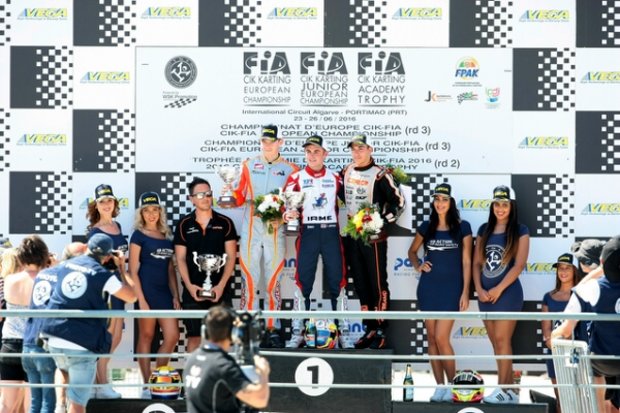 Joyner (Zanardi) claimed the victory in Portimao and gained the classification lead. Hiltbrand very good on the podium and currently third in the standings. Hauger among the best of OK Junior, as Wilson who was unlucky in the Final though.

CRG flag has been raised high thanks to series of great performances in Portugal’s third round of the European OK and OK Junior Championships held at the International Circuit Algarve of Portimao. Tom Joyner (Zanardi) and Pedro Hiltbrand (CRG) were on the podium in OK, while Dennis Hauger was close to the podium in OK Junior.

JOYNER IS THE NEW LEADER OF OK

The 2013 World Champion Tom Joyner, on Zanardi-Parilla, has been the dominator of the round of Portimao together with the Spanish driver of CRG Pedro Hiltbrand, who has been an excellent protagonist of the Final he has been leading early on. Joyner secured the win in the end, while  Hiltbrand celebrated with him on the third step of the podium. The two drivers of Tinini Group are now among the most serious contenders in the title campaign that will end next 31st July in Genk (Belgium). Joyner is in fact the new classification leader with 108 points, while Hiltbrand is third at 95.

Among the other protagonists for CRG, Felice Tiene has to be praised for his strength and will to continue the event despite a big accident in a heat that compromised his end result. Tiene managed to walk away from the crash with some pain but no serious injuries and kept racing for the rest of the weekend, recovering up to the 13th place in the Final.

The German driver of CRG Hannes Janker was also among the front runners and ended ninth in the Final, as the Portuguese Andriy Pits who closed his effort in P12. Abu Dhabi’s Amna Al Qubaisi also put in a very good race ending with P19 her debut with CRG in a European Championship. The Finn Paavo Tonteri has been quite unlucky instead. He has always been among the quickest (ninth in Prefinal), but had to retire in the Final when holding P7.

The Norwegian Dennis Hauger on CRG-Parilla has put in another great performance in OK Junior and confirmed to be one of the main protagonists of the class, despite being in his maiden year in Junior after the switch from 60 Mini. In Portimao he was 14th in qualifying, 12th after heats and fourth in his Prefinal. Hauger run an exciting Final holding P2 for a long time and fought for the podium. Eventually he was fourth at the sprint to the line, but he definitely deserves a round of applause.

The other young Brit of CRG works team Teddy Wilson has been great second in his Prefinal and installed himself in P4 early into the Final. Wilson later on suffered a bit in the melee of the fight for top positions and had an excursion that made him slip to the back. He eventually closed his effort in P16. The Canadian of CRG Antonio Serravalle also scored a good result, taking P13 in the Final but has always been among the quickest. He was 10th absolute in the heats and was sixth in his Prefinal.

Also among the Finalists, the German Esteban Muth was 29th at the flag, Tara Eichenberger of X-Rei Motorsport was 30th and the French Pierre-Louis Chovet had unfortunately retire early. That was a pity as he had run a great weekend up to that point and had claimed P14 in the Prefinal.

The Brazilian Gianluca Petecof, Andrea Rosso of Team Morsicani and O’neill Muth could not qualify for the Final stages, while the two Spanish drivers Gonzalo Vergara Fernandez and Delbin Garcia Alonso did not make it through the heats.

Dino Chiesa, Team Principal CRG: “We head back home from Portimao with two drivers in the fight for the OK Championship –  Tom Joyner and Pedro Hiltbrand, and a driver with good chances to slide in the top positions of OK Junior: Dennis Hauger. Alongside these excellent racers, all our drivers have been very competitive and confirmed the quality of our material, that reached a great level of competitiveness. I am sorry for the incident Felice Tiene was involved in the first heat, which was due to the engine failure of a driver ahead. Felice managed to continue his racing weekend, but this certainly set him back physically and prevented him to show his best. He would have definitely been among the quickest of the weekend.  The OK race has been quite tight and the front runners were all on the same pace, Pedro Hiltbrand could have taken the victory but his second place is very good classification-wise. I believe we will go to Genk with great chances. The speed of our drivers did not come as a surprise, performance and results are rather a constant. Paavo Tonteri has also been very strong, but the engine failure stripped him of the chance of getting a good result. Hannes Janker also had a good weekend and recovered from the incident of the first heat. Amna Al Qubaisi has been very good in her first experience in the European Championship. In Junior, Teddy Wilson had an incident in the Final, but has been a great protagonist of the weekend, as Antonio Serravalle who unfortunately had an hiccup at the start of the Final. Dennis Hauger held a virtually certain second place up to two laps to the end, when he run wide on the dirt at the central hairpin and lost a position. He tried to get back to P2 in the closing stages and attempted a difficult overtaking move which did not pay off. He ended fourth but no blame on him.  Pierre-Louis Chovet put in a great race and is showing a good growth, as Esteban Muth, while his brother O’neill was involved in an incident in one heat and lost some ground with it. Petecof had an hiccup in qualifying and could not recover to gain access to the final stages. Overall, it has been a very positive exit. Results are coming and we are fighting in all categories: team and material has improved a lot.”

All results are available at www.cikfia.com

The closing act of the European OK and OK Junior Championships will take place in Genk (B) next July 31st in a joint event with the KZ and KZ2 closer.