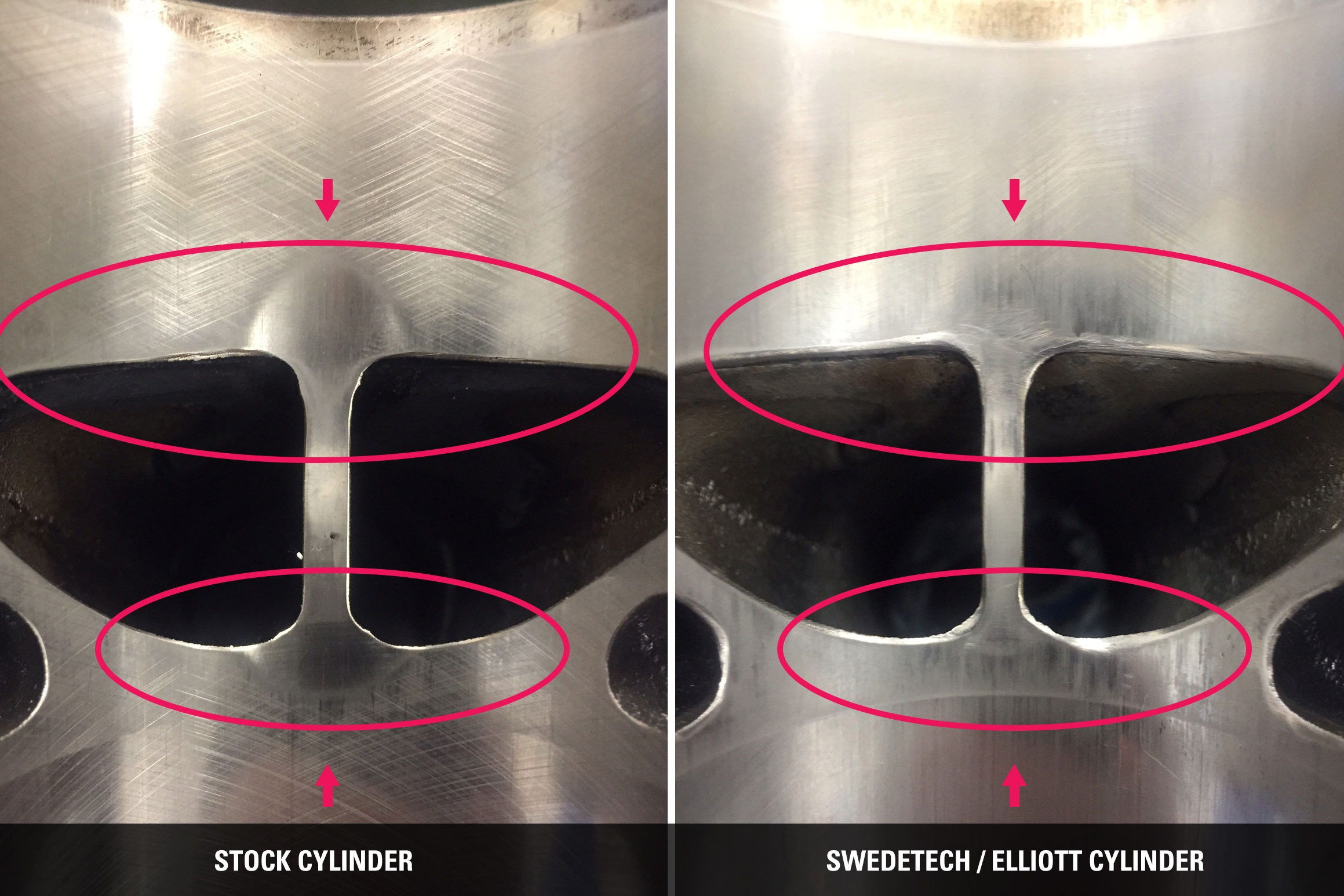 Superkarts! USA has been compelled to respond to the ongoing questions surrounding the impounded Honda CR125 cylinders and better clarify the findings and subsequent actions resulting from the examination process.

Previous efforts to be discreet have unfortunately backfired, underscoring the need for the series to further elaborate on the events that transpired, based on the clear and present evidence of non-factory modifications.

As the previous press release on June 6 indicated, four competitors’ cylinders were impounded at a regional ProKart Challenge event to test and rule out the common speculation that there was aftermarket coating present. Per the SKUSA rulebook, using any aftermarket coating like Nikasil® would be a clear violation of the stock format, and thus illegal. This speculation of aftermarket coatings has been a point of concern among many in SKUSA circles and something we felt important to officially repudiate once and for all with a comprehensive series of tests.

To be completely clear: none of the cylinders impounded showed any evidence of any aftermarket coating.

However, in the examination process one of the cylinders in question was found to have chamfering on the exhaust ports. These modifications were deemed to be deliberate and intentional and represent a potential attempt at gaining a performance advantage.

“It’s a bad analogy,” offered SKUSA principal Tom Kutscher. “But it’s like a vehicle being pulled over randomly at a checkpoint to inspect for drug trafficking, only for the officer to find illegal weapons in the car. While the chamfering and grinding wasn’t what we were initially looking for, obviously we had to address it once we discovered it.”

To ensure SKUSA proceeded in a manner that was consistent, clear, and unanimous, the preliminary findings were shown to a panel of experts both within the karting industry and outside of it. SKUSA sought as much technical input as it could obtain to ensure any such ruling was correct.

“Naturally, when we make a call like this, we want to make sure we’re making it from a place of 100% certainty,” added SKUSA Tech Director, John Motley. “We wanted confirmation from as many independent experts as we could get.”

In clear and certain terms: In the professional and expert opinions of everyone who examined the cylinder in question, there is a unanimous determination that the chamfering of the exhaust ports was deliberate, not a result of manufacturing, and in clear violation of the stock format.

“A ruling like this is not meant to assign blame,” Motley clarified. “We don’t know who did what, or why. We don’t know when the cylinder was obtained, or by whom. So we’re not here to point fingers. We’re just here to ensure that any cylinder used in competition is 100% compliant. While some cylinders may undergo light human touch to remove flash casting at the factory, we want to stress: it has been unanimously determined by multiple experts that the chamfering is not even close to any manufacturing tolerances seen in other stock CR125 cylinders.”

Because the infraction found was not what was originally being tested for, SKUSA hoped to resolve the discovery in a relatively discreet and low key manner. The series’ tech officials met with Swedetech Racing Engines at the last ProKart Challenge race in Sonoma to discuss the findings and resulting actions to be taken.

It was agreed upon that it was in the mutual best interests of all to resolve the matter as quickly and tactfully as possible. The series sought to omit names and technical details in the initial press release as not to further tarnish the reputations of those involved, or to be seen as disparaging an industry leading company.

“Whether that was the right or wrong thing, I guess it can be debated,” said Tom Kutscher.” But the intent was to be as empathetic and fair to Darren (Elliott) and Swedetech as we could. We’re not out to deliberately embarrass anyone.”

The understandable confusion from the karting community at large and subsequent press release by Swedetech Racing Engines has indicated to SKUSA that we need to be as transparent in this matter as possible. We want to address any question or concerns related to this entire process and will be releasing the technical information used by the panel of experts to make the previous determinations.

“We just want to promote a level playing field,” concluded Tom Kutscher. “This is one of those no win situations where we tried to limit the initial embarrassment to those involved, as not to be seen as having any personal agenda or ill will. Ultimately though, the series competitors deserve complete transparency and we can’t have the Honda engine format or our tech department discredited in an attempt to take the high road.”

Attached are initial photographs which clearly show the chamfering in question compared to a stock Honda CR125 cylinder.

The following is an official statement from Honda / HPD: “The data provided by HPD confirmed the cylinder in question clearly showed deliberate modification when compared to a stock cylinder. The information was provided to SKUSA in order for them to make a technical ruling based on their current competition rulebook.”

Measurements Related to Exhaust Port When Using the Industry Standard Visible Light Check: (actual linear measurement from the top of the cylinder)

The effective exhaust port opening, including chamfer is over .070″ higher in the impounded Darren Elliott cylinder. This will result in a sizable exhaust opening duration increase (approximately 2-3 degrees) which will meaningfully raise the peak horsepower output.

Going forward, SKUSA will be employing more tests to ensure complete compliance in all porting areas.  Our goal is to ensure the timing of the opening events, in particular that of the exhaust ports, are as the Honda factory intended.