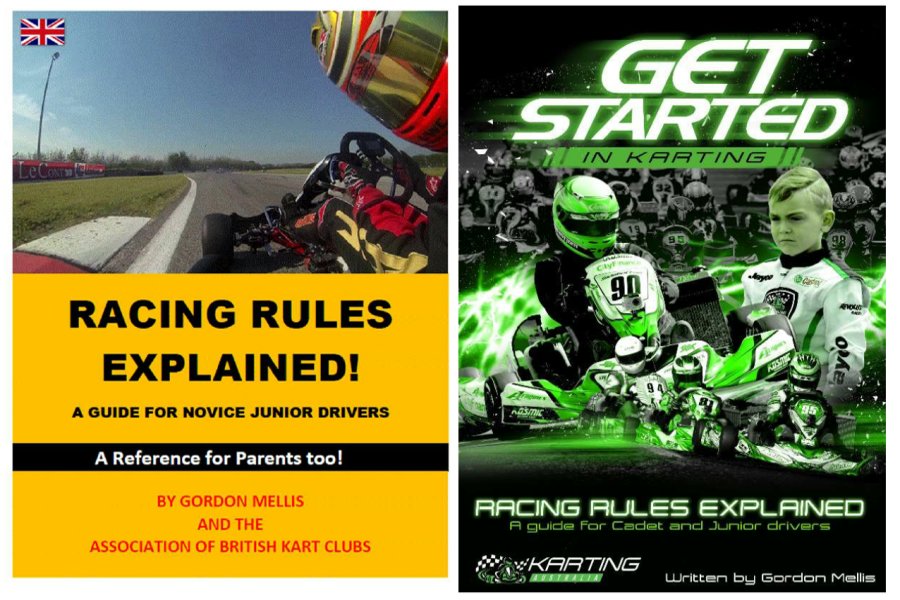 The ‘Association of British Kart Clubs’ and ‘Karting Australia’ are among the latest karting organisations to adopt a new 68 page booklet entitled ‘Racing Rules Explained’ which is intended for junior novice kart drivers in the 6 to 12 year old age bracket and their parents.

UAE East Rotax Max Challenge back in 2013, the abundantly illustrated booklet was originally intended for the Middle East series but after receiving some really positive feedback from officials, parents and drivers further afield, various country specific editions were produced for overseas markets too and now in its third year of publication, the publication has now sold several thousand copies in 9 countries including Australia, Malaysia, Sultanate of Oman, United Arab Emirates, Lebanon and now the UK.

The concept behind the project was originally inspired by the multi-national mix of junior novice drivers competing in the Middle East and the realisation that most of them and their parents had never seen a relevant karting ‘rule book’ let alone studied and properly understood the sporting regulations, especially where language barriers can prove to be an additional challenge when interpreting the rules.

Gordon explains that the objective of the booklet is simply “to create a greater situational awareness amongst the sport’s younger drivers, especially those new to racing about the main rules of racing and the expectations that race organisations and Race Officials have for safe, competitive and fair races, with a particular emphasis on the all-important formation lap and race start procedures”.

The sport’s rules and regulations are traditionally text based and by necessity are relatively complex and technical in nature. Understandably, these rules and regulations are squarely aimed at those adults who race or organise events or manage circuits, run teams, and for those who officiate within the sport. However, drivers can now compete at ages as young as 6 years old, yet the manner in which we try and communicate the sport’s regulations, rules and procedures to this age group have largely remained unchanged over the years.

Yet, Gordon opines that “we all expect these youngsters to start their racing careers without really understanding the rules properly and just pick things up as they go along driving perfectly within these rules from race one, typically based only on a basic competency assessment”.

“But let’s be honest, it’s wholly unreasonable to expect a novice driver in the junior classes to sit down read, learn and apply the sporting rules and regulations as they are currently written”.

“Even listening to the language and terminology used at a typical drivers briefing on race day must be somewhat baffling and intimidating for any junior driver entering the sport”.

‘Racing Rules Explained’ makes extensive use of colour cartoons, photos and illustrations to simply “translate” some of the most important text based rules, regulations and procedures into a more pictorial style of format using plain language that is more readable and easier to understand by the target age group……..children.

However, it is fully acknowledged that the youngest drivers within this age group may not be able to read this booklet word for word or understand the finer points of the rules by themselves, so Gordon emphasises the key role that each parent, team principal or coach has to play in educating novice drivers about the rules.

“The onus is on a parent, coach or guardian of a young kart driver, new to the sport to firstly read and understand the official sporting regulations, specific event and championship rules and regulations”.

“Then use the “Racing Rules Explained” booklet as a tool to carefully and clearly explain and demonstrate the relevant rules and regulations to your young driver, always taking the time to assess if your driver fully understands the main rules, especially the race start procedures”.

The booklet is currently only available in English and hard copy format but downloadable and foreign language versions are currently being explored.

To obtain your UK copy of ‘Racing Rules Explained’ contact your local kart club or the ABKC (www.abkc.org.uk ). All ABkC Member clubs will be sent a copy and order form for whatever quantity they need. Clubs can then decide on a sale price up to a maximum of £5, or even to give a copy free to novices. Ordering details will be sent with each club’s initial copy. The author can be contacted at gordon@race-write.com