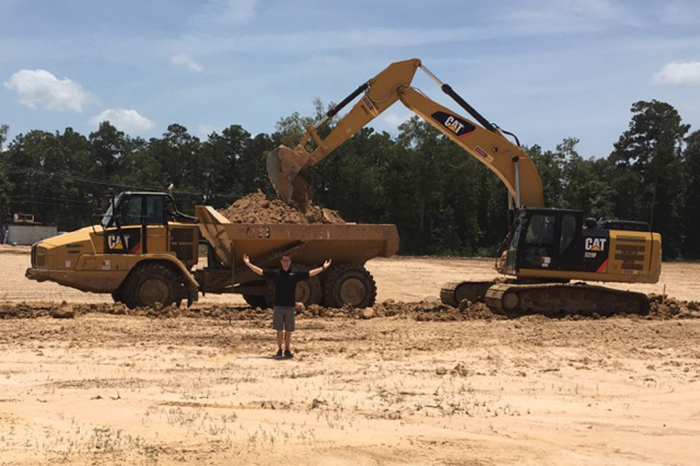 After nearly a year of delays due to many reasons, including offsite utilities, major new road construction, and unprecedented rain for over a year, SpeedsportZ Racing Park at Grand Texas and the Alan Rudolph Racing Academy is finally under construction. Opening is planned for late Fall 2016.

“It has been a long time coming but we are now in full construction mode and the conceptual ideas are finally coming together,” explained Alan Rudolph, Operating Partner at SpeedsportZ Racing Park. “We have had horrible weather that had put a hold on the new road and offsite utility construction.  However, we are finally beyond that and happy that our own shovels are in the ground.”

SpeedsportZ Racing Park is North America’s new prototype outdoor karting facility.  Located in North Houston, 15 minutes from the George Bush Intercontinental Airport, the property is just off I-69/Hwy59 and near Hwy 99, the Grand Parkway and adjacent to the Grand Texas Sports and Entertainment District, which is also under construction.

“It was nearly two years from concept to ground breaking.  My company is still helping Alan with development but once completed he will handle operations 100%,” explained co-founder, Tim Crawford.  “With that in mind, I am already planning our next facility and am searching for sites in the big cities in Texas.  In under two years we will have another one or two locations open.”

The SpeedsportZ Racing Park campus includes a dedicated half-mile concession rental track and facility, a separate .8-mile performance track and facility as well as a paved skid pad and paddock.  A total of four buildings include the main for concession and meeting space with a second floor viewing deck, a separate performance shop with a second floor viewing deck, rental garages for members, and a stacked-kart storage building. Three separate, massive outdoor canopies will keep customers and racers out of the hot Texas sun and provide a sitting/viewing area of the facility.

The business plan focuses on concession karting, group programs utilizing both karts and cars, the Alan Rudolph Racing Academy courses for all levels of drivers, and club memberships with club racing.

“We have a little bit of everything for racing enthusiasts, novices and experts.  There is nothing needed with this phase of development short of my original vision,” says Alan Rudolph.   “A future phase will include a few motorsports-oriented amusement components, as other entertainment projects in Grand Texas open up.”

The Houston location is planned as the “flagship” site.  “Any future Speedsportz locations will focus on rental concession-based business with exciting amusement track options we have been working on with our consultant,” Crawford continued.  “The non-flagship concept is smaller in scale and land use, and its business plan can exceed the revenue of an indoor karting track plus eventual land residual.”

Those interested in more information can contact Alan Rudolph via e-mail to Alan@SpeedsportzTX.com. Visit www.speedsportzracingpark.com this summer for the fall/winter schedule and class offerings. Gift certificates will be available for holiday purchases.