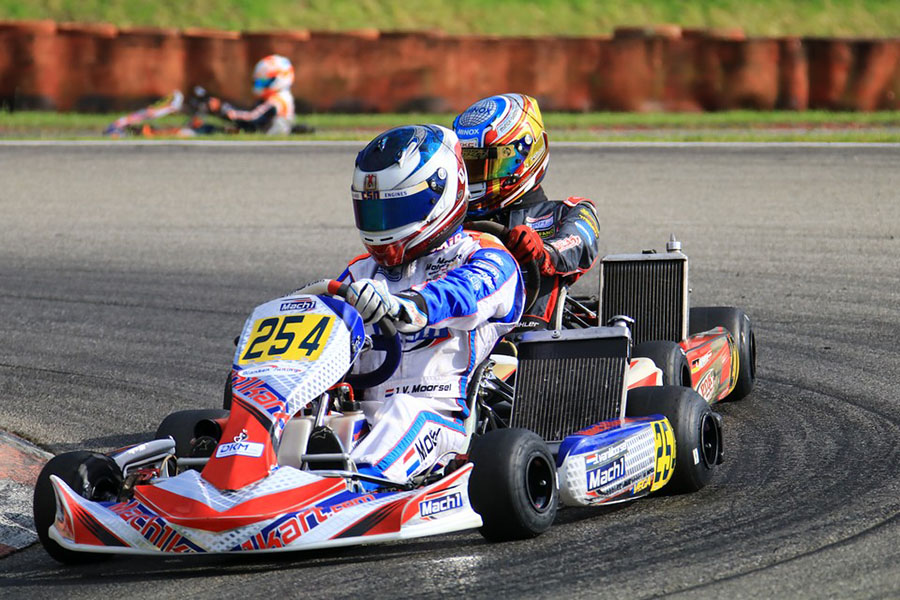 Mach1 Motorsport started at the German Kart Championship in Ampfing with a large number of drivers last weekend. Martin Hetschel’s team braved the partly very difficult weather conditions and placed themselves on the front ranks of Germany’s highest kart racing series in spite of a lot of bad luck.

Last weekend, the Schweppermannring in Ampfing (Upper Bavaria) hosted the second event of the German Kart Championship. Heavy rain caused strongly altering track conditions on the 1.063m long track and made the international meeting a challenging undertaking for drivers and teams. Nonetheless, 141 drivers from different nations faced the challenges on and off the track and provided thrilling kart racing on the highest level. The Mach1 Motorsport Team was there as well and started with their drivers at the DJKM, DSKM and the new DMSB Shifterkart Cup.

Cameron Boedler started at the German Junior Kart Championship as a soloist and caused a sensation at the beginning of the weekend. As the fastest driver of his group, he was on second position at qualifying and looked forward to the heats with high motivation. “Despite the difficult conditions on the track I got along really well – the kart is doing exactly what I want it to”, explained the German-Brazilian. After technical difficulties during the heats Cameron qualified for the final races via the repechage. But luck wasn’t on his side there either – the Mach1-factory driver had to end the race prematurely. Nonetheless, the youngster gave it his all again after that and managed to drive from the back of the field to 16th position.

Three drivers started for Mach1 Motorsport at the hard-fought German Shifterkart Championship. Pawel Myskier showed a good performance. The Pole qualified as 18th driver and was on the pleasing 11th place after the heats, despite a time-penalty in one heat. Among the incredibly homogenous field of the DSKM, Pawel crossed the finish line of both final races on 12th place and even drove the fastest lap during the first race.

Experienced driver Douglas Lundberg already gave a lot of power with fifth place at qualifying among 46 drivers. He finished the following heats on the good second place and an eleventh place after a racing accident, which made him fall back to eighth place on the interim standings. After positions 11 and 13 at the races, the Swede is now still on sixth place on the overall list of rankings and still has all chances of racing forward to the cup ranks during the further course of the season.

Jordi van Moorsel unfortunately had to deal with more bad luck. After the heats, he had to give it his all at the repechage to get one of the last tickets for the final races. Jordi did this very successfully by achieving second place and then went into the first final race from 30th place. With great overtaking maneuvers, he fought his way forward to 18th place. By ending up on the 21st place at the second race, the Mach1 Motorsport-protégé then just barely missed a top 20 result.

Five drivers drove for the German chassis manufacturer at the DMSB Shifterkart Cup. Toni Greif experienced a perfect weekend. After two great heats, Toni went into the first race from third place and was able to improve his position to second. He then had to deal with a rough setback at the finish line. A construction mistake after the inspection of the engine on Saturday made for an exclusion from the ranking and resulted in a starting position from the back of the field for the second race. There, Toni gave it his all once more and raced forward to 22nd position.

Thomas Neumann showed a constant performance. The Bayreuth resident was on the good sixth place after the heats and ended up on eighth and ninth positions at the final races and thereby collected important championship points. Marco Forrer was able to impress as well. A catching-up race from 18th to seventh position during the first race highlighted the efficiency of the Mach1 material. At the second race, Marco had to deal with a time penalty, but was still noted in the result lists on the good twelfth place.

Julian Müller started as a guest in the internationally manned DSKC and showed himself in top-form. During the free trainings and warm-up, Julian was always among the top drivers. Qualifying in rain threw him back to 17th place though. At a heat, Julian then had to deal with an exclusion from the ranking due to a misinterpreted gesture of a race director. From 26th place, Julian then drove forward to 13th position during the first final race and thereby proved his skills. During the second race, he then had to park his kart in the off prematurely though.

Team mate Tim Schröder experienced a bad weekend. A falling-out during the first race destroyed all hopes for a good result and made the advancement during the second race difficult. The Bad Oldesloe-resident stayed behind his possibilities with 29th place.

“The weather really wore us out this weekend. Unfortunately luck wasn’t always on our side during the races. Nonetheless, we were able to prove our competitiveness with the many strong individual results and are looking forward to the next races optimistically. We’re going to keep making an effort to drive among the front of Germany’s highest kart racing series”, summarized team leader Martin Hetschel in the evening.