The 2016 Texas ProKart Challenge program traveled into Sooner nation with the Oklahoma Motorsports Complex hosting Round Three and Four on June 10-12. Considered among the most challenging courses in North America, the Norman, Oklahoma circuit welcomed the P1 Promotions Superkarts! USA and Texas Barge & Boat Inc. Rotax Max Challenge programs as the chase toward the series championships continued. Friday and Saturday provided perfect racing weather while Sunday brought in the familiar rain weather accustom to major events at OKC. The wet weather mixed up the results in some categories with a number of new winners and repeat victors highlighting the weekend. 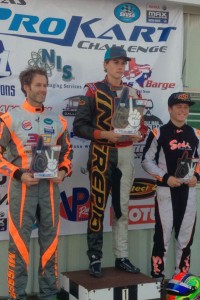 The headline Stock Moto race group, presented by Champion Racing and Uncle Hal Gottspeed Racing, was led all weekend by the S1 Pro Stock Moto drivers. Jake French was challenged on the weekend by Florida driver Nick Neri. French swept the opening round on Saturday with Neri fighting back Sunday. Nick set fast time in qualifying and won the heat race, only to see French fight his way back to point and earn a fourth straight victory. Harry Gottsacker notched his first series victory in the S2 Semi-Pro division while point leader Jordon Musser added a second on the year. Round One winner Austin Wilkins was in control throughout Saturday through qualifying and the two heat races. Wilkins led wire-to-wire in class, until a two-position penalty for too wide in the rear width took the win away. That handed the victory to Gottsacker and moved Musser up to second and Wilkins down to third. Andretta Young and Greg Alvarez completed the top-five. Musser went undefeated Sunday, leading the class in all on-track sessions for his second victory in 2016. Wilkins drove to second with Young improving to third ahead of Casey Ross and Nathan Mauel. Rod Clinard and Venkat Reddy each took home a victory in the S4 Master Stock Moto division.

Colin Queen made a return to Texas ProKart Challenge competition with a sweeping performance of the IAME Mini Swift division, presented by Mind Shift Financial. Queen led every on-track session, in the dry and in the wet, against the largest field of the event with 17 drivers. Saturday, Colin never relinquished the lead position, pacing every single circuit of the two eight-lap heat races and the 12-lap main event. He stretched out to a four-second advantage for the victory ahead of Aden Rudolph and Chase Gardner. Denton winners Branyon Tiner and Caiden Mitchell completed the top-five. Despite the wet weather, Sunday was the same with Queen ruling over the field in qualifying, the heat race, and Final. The advantage was 14 seconds in the feature with Mitchell and Gardner joining him on the podium while Alex Stanfield and Adrian Cruz finished fourth and fifth. 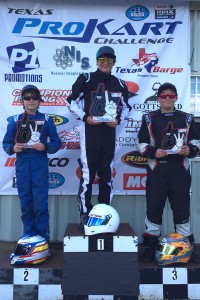 Cade McKee took the top step of the podium for the first time in Rotax Junior (Photo: TPKC)

Maxwell Waithman extended his win streak to three while Cade McKee became a first time series winner in the Texas Barge sponsored Rotax Junior. Waithman went perfect Saturday, leading all on-track sessions en route to a 2.3-second victory. McKee drove to second with Brandin Warwas joining them on the podium. Marcelo Garcia and Maxwell Stephens finished the top-five. The wet weather changed the order out front with Garcia holding the advantage after qualifying. McKee fought forward to take the win in the Prefinal and remained out-front to claim his first series victory. Warwas was second with Cash Tiner in third. Waithman was one spot off the podium with Kaden Grey in fifth. Matt Stretch added a third victory in the X30 Junior division. Stretch won the Saturday main event over Taylor Zander and Preston Perlmutter. Sunday, Zander took control to bet out Cooper Heffley and Perlmutter.

Brett Mitchell nearly had a sweep on the weekend in Rotax Senior, presented by Dallas Karting Complex. Leading from qualifying to the last checkered flag on Saturday, Mitchell took his second victory of the season by nearly six seconds ahead of Thomas Beaudoin with Marcellus Dukes finished third. Brett had things in control once again on Sunday in the wet, leading qualifying and winning the heat race. Mitchell was leading in the Final until the halfway point when he went off-track, and dropped to the tail of the race group. This allowed Dukes to take over the lead and score his first series victory. Miguel Mier drove to second with Mitchell up to third. The X30 Senior field battled close once again over the two days with Lane Vacala taking home his first win of the year and Nathan Adds recording a second of 2016. Vacala was able to hold off a charging Nick Martin and Adds on Saturday after top qualifier and heat race winner Max Hewitt retired early. Hewitt was quickest early on Sunday, only to see Adds take the lead and the victory with James Russell slipping up to second. David Scherotter ran uncontested in the X30 Master category. 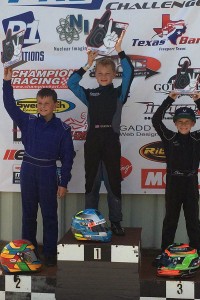 Both Noah Baker and Juan Pablo Cepeda earned their second victory of the season in the Nuclear Imaging Services-sponsored IAME Micro Swift class over the weekend. Baker emerged as the winner on Saturday after battling with Cepeda throughout the day. The fight continued until the final few feet on the final lap of the main event, as Baker edged out Cepeda by 11 thousandths of a second. Miles Preston Hewitt won the battle for third. Sunday was all Cepeda from qualifying to the final checkered flag, earning a 16-second victory over Baker with Hewitt once again in third.

A new award will be handed out each weekend at the Texas ProKart Challenge called the ‘HI-5’. The series officials and staff on-hand are watching for great sportsmanship – on and off the track – exciting passes, awesome finishes, fast laps or something exemplary that is worthy of a ‘high-five’. The inaugural recipient of the ‘HI-5’ award went to Noah Baker for his maneuvers in the Micro Swift main event victory on Saturday.

The Texas PKC resumes in just a few weeks as the programs travels back to the Lone Star State to Katy, Texas and the Gulf Coast Kartways on July 8-10 with special events set to join the program over the weekend. Registration is open at the series website texasprokartchallenge.com and be sure to find Texas ProKart Challenge on Facebook, Twitter and Instagram.