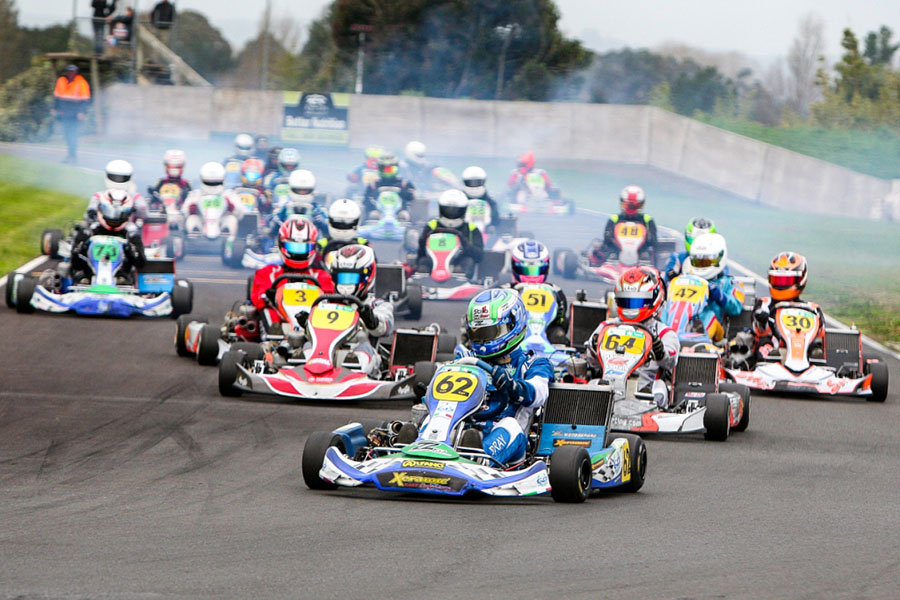 Simeon Woolsey, Jared MacKenzie and Garry Cullum took out their respective class titles at an all-action 2016 ProKart Series final at the KartSport Hamilton club’s Winter Cup meeting over the weekend.

That, however, was only part of the story from Agrisea New Zealand Raceway. Case in point, KZ2 class victor Simeon Woolsey.

Though the 16-year-old from Auckland won his class at the first two rounds of this year’s series and took a seven point lead into the final one, he had a horror round.

After fuel problems saw him fail to finish the Final Woolsey ended up an uncharacteristic seventh overall for the round with the decision as to who would take the 2016 KZ2 title going to countback after he and fellow Aucklander Aaron Wilson – who in stark contrast won the first heat and finished second in the Final for one of his best rounds this year – ended up tied on 352 points.

Woolsey got the nod but it was as close a finish as anyone involved in the ProKart Series could remember.

Smyth, who this year has been racing KZ2 karts and a Ferrari 458 car across the Tasman, definitely took the battle to Bray and Wilson at Hamilton and looked set to challenge for the lead in the Final only to be forced out with six laps to go by a sticking throttle.

In the other two ProKart Series classes victory was a little more clear-cut for Jared MacKenzie (KZ2 Masters) and Garry Cullum (KZ2 Restricted).

MacKenzie qualified quickest in class and only conceded one heat race win (the first) to season-long rival Steve Brown before sealing series victory in class  by a margin of 12 points. Third on the day was Aucklander Mark Lane but former Stock Car ace Graeme Lambert from Mangakino – who finished two places back – had enough points in hand to claimed third place series honours from Lane and Andrew Hunt.

Garry Cullum, meanwhile, successfully defended his 2015 KZ2 Restricted class title with a round win over Connor Adam, Shaun Curran, Michael Connell and Gerhard Benadie. Cullum and Adam were again the quickest of the Restricted class starters, the pair often running ahead of the front-running Masters class drivers in the combined KZ2/Masters/Restricted field.

As well as winning the KZ2 class Simeon Woolsey also won the Alan Wilson Memorial Trophy for the series’ most improved driver awarded at the meeting.

Logan Brown won the President’s Cup for the best performance by an under 18-year-old driver, and Enrico van der Griend won the prize for the top over 50-year-old in the Masters class.