Extreme Weather Events at the DKM in Ampfing 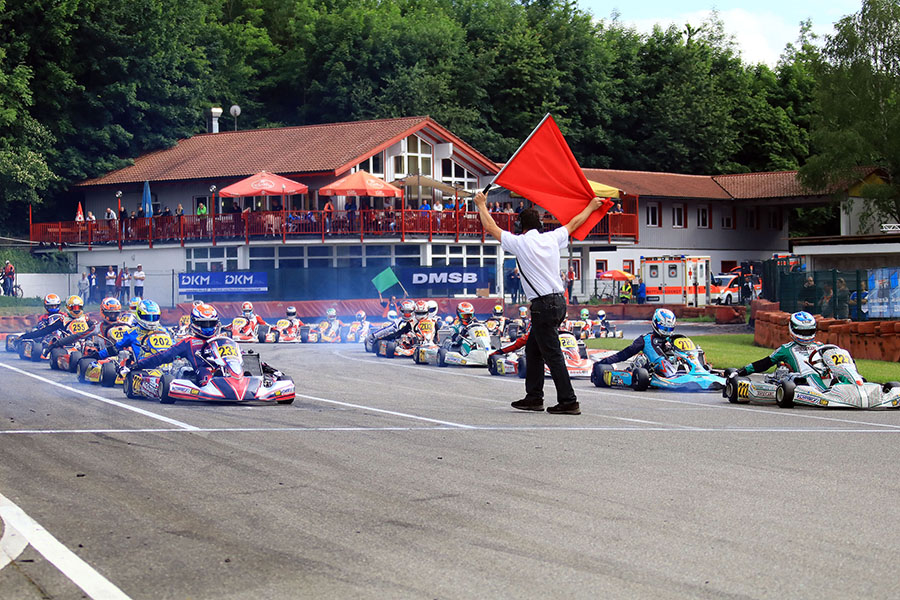 Ampfing. Last weekend, the Schweppermannring in Kerpen hosted the second event of the German Kart Championship. 141 drivers started in the four classes and experienced exciting races in changing weather. Before the season half-time, everything is still possible regarding the championships.

After the season kick-off in Wackersdorf, the second racing weekend awaited the drivers and teams. 141 drivers started at the 1.063m long Schweppermannring. The weather wasn’t good to the drivers, teams and spectators. Rain showers on Saturday and Sunday caused hecticness at the pre-start.

In the four DMSB grade series DKM, DJKM, DSKM and DSKC there were a couple of new winners, who are now causing suspense on the lists of rankings. At the German Kart Championship, Bent Viscaal and Jean-Baptiste Simmenauer shared the victories. At the juniors, Charles Milesi and Dennis Hauger prevailed. Marco Ardigo and Jorrit Pex won at the German Shifterkart Championship. The only double winner was Symen Wiggers at the new DMSB Shifterkart Cup.

The field of the DMSB Shifterkart Cup was filled to the last place with 34 drivers. Rookie Maximilian Paul (Team NKS for Racing) showed the best performance during the temporarily rainy qualifying and secured pole position for the following heats. During these, Dutchman Jeroen Bos (CRG Holland) prevailed then. With two victories, the CRG driver took the lead and was very content in the evening: “It’s going really well for me. The cup is a great addition for the drivers who don’t drive a kart every week.”

Right on time for the start of the first final race, there was commotion at the pre-start. Rain set in and caused new conditions. The race management center postponed the start and the field switched to rain tires. During the first half of the race, Bos dominated the events. But with growing racing distance, the Dutchman lost his advance and fell back to fifth position. Symen Wiggers (CRG Holland) and Maximilian Paul (NKS for Racing) fought for the victory in the end. Both of them raced to the front and showed a great fight. After 24 laps, Wiggers crossed the finish line as the winner in front of best German driver Paul. Toni Greif (Mach1 Motorsport) achieved third place in front of local driver Stefan Weber (Kartshop Ampfing). Subsequent penalties for Paul and Greif changed the rankings considerably then. New second winner was Weber in front of Bos, Max Weering (CRG Holland) and Fabio Wagner (KSM Schumacher Racing Team).

Despite dark clouds in the sky, it stayed dry until the second race of the DMSB Shifterkart Cup. With good track conditions, kick-off winner Wiggers achieved the best start. It wasn’t easy for the Dutchman then though: Behind him was a trio of pursuers: Weber, Patrick Kreutz (RS Motorsport) and Weering. The four of them drove the race right behind each other. The decision was then made five laps before the finish line. Weber attacked the leading driver Wiggers, who fended him off and achieved a small advance. In the meantime, the pursuers got into a hard fight for positions. In the end, Weber finished on second place in front of Kreutz and Weering. Wackersdorf-double winner Max Tubben (CRG Holland) drove from tenth starting position to fifth place. Wiggers took the lead on the overall list of rankings due to his double victory and was accordingly content in the evening: “This weekend was really good for us. Our performance was right in rain and on the dry track. I’d like to tie in with this at the upcoming races.”

DJKM: Milesi and Hauger win at the juniors

Qualifying of the juniors was dominated by the weather. Both training groups drove under different conditions and were then positioned next to each other. Fastest driver of the first group was Christian Cobellini (Emilia Kart); the best driver of the second group, Cameron Boedler (Mach1 Motorsport) was put next to him. During the heats, championship leader Charles Milesi (Tony Kart Racing Team) was back to his usual performance then. The Frenchman won both races and therefore was on pole position for the first final race.

The Tony Kart-factory driver drove away from his opponents due to a perfect start. Towards the middle of the race, heavy rain set in and the Frenchman lost some speed. His advance grew smaller from lap to lap – Petr Ptacek (Formula K Racing Team) fought his way forward and caused a thrilling final. Milesi kept his overview though and celebrated another season victory. Behind the duo, Dennis Hauger (CRG Holland) finished on the safe third place. The drivers on fourth to sixth places were very closely together: Cobellini, Luke Wankmüller (Solgat Motorsport) and Doureid Ghattas (KSM Schumacher Racing Team) showed a great triple-header. Unlucky driver of the race was Mads E. Hansen (TK Racing) – the Dane had to drop out of the race from the secure fourth place.

Hauger set the base for his first victory at the German Junior Kart Championship during the second race. The Norwegian took the lead and then fled. While he drove off at the front of the field, the drivers behind him fought hard fights for positions and thereby lost important time. Milesi was only on fourth place at the beginning and needed five laps to drive back to second place. The victory became a distant prospect and went to Hauger though. “I was already successful on Friday at the free trainings. Unfortunately qualifying didn’t go so well then. I was way behind on 32nd place but was then able to fight my way forward again during the heats. I could then attack during the final races again”, the youngster summed up. Italian guest driver Cobellini came in third in front of David Vidales (KSM Schumacher Racing Team) and Théo Pourchaire (Komsic Racing Department). Best German driver was Wankmüller again on eighth place.

Patrik Hajek (Kosmic Racing Department) achieved his first pole position of the year, but then he had to give the reins to multiple World Champion Marco Ardigo (Tony Kart Racing Team) during the following heats. The Italian was in a great mood in the evening and was looking forward to the finals excitedly: “After my bad luck in Wackersdorf things are going really well here again. I’ve gained important championship points due to my victories and really want to continue like this.”

Just as announced, Ardigo defended his top position with a good start and kept his strongest opponent Hajek at bay. The Czech was almost as fast as the Italian and achieved second place. Clear third driver was Guust van Specken in front of Jorrit Pex (CRG Holland) and Paolo de Conto (Renda Motorsport). CRG-driver Dylan Davies (CRG Keijzer Racing Team) had to deal with a setback: He was on fourth place until right before the end of the race, but then had to drop out of the race prematurely.

After the calm first race, the second one was extremely thrilling then. During the first laps, 14 drivers were really closely together and fought for the top positions. Ardigo drove on the first place in the beginning, but four-time champion Pex hindered the Italian’s double victory. Despite rib-problems, he fought his way past Ardigo and celebrated another victory. “I’ve been dealing with rib-problems for several weeks now and didn’t know if I could even start here. In the end everything worked out though and I won. I don’t want to think about the championship title yet. We’re taking it from race to race and always want to win.” Ten laps before the end the rest of the positions were clear as well. De Conto followed on third place in front of Specken and Stan Pex (CRG Holland). Pex received a time-penalty due to a collision with Foré though and was only ranked on 20th place. New fifth winner was Lorenzo Camplese (Parolin Racing Kart Srl.).

The first final was as thrilling as it gets then. On the drying track, the whole field started with rain tires. These dissolved during the course of the 24 laps though and challenged the drivers to keep their karts on the track. Pole-setter Tonteri was the fastest driver of the field in the beginning and had a lot of space between himself and his opponents. But a slight low minimized this. Bent Viscaal (KSM Schumacher Racing Team) used his chance and took the lead. But the reigning Junior-Champion couldn’t take a rest either. From the last starting position, Noah Milell (JP Racing) drove forward and achieved the victory. A subsequent penalty threw him back to sixth place though. Therefore, Viscaal achieved his first DKM success in front of best German driver Manuel Valier (Valier Motorsport). Tonteri fell back to third place. The top five were completed by Jean-Baptiste Simmenauer (Tony Kart Racing Team) and Felix Arnold (KSM Schumacher Racing Team).

The second race started turbulently: Viscaal had a bad start and fell back considerably. New leader was Simmenauer in front of Milell. During the course of the race, the Frenchman defended his position and rejoiced about his premiere victory: “It’s great to win, the team has done a great job. Now I’m going to attack during the following races, our goal is the championship.” Valier kept his third position behind the two OTK-drivers in the beginning, but then fell back and came in tenth. Karol Basz (Kosmic Racing Department) highlighted his qualities with a strong catching-up race and completed the winners’ podium on third place – fourth place went to Tonteri. The decision regarding the fight for fifth place only fell during the last lap. Emil Dose (KSB Racing Team) fended off all attacks of his pursuers Max Hesse (RB Racing) and David Brinkmann and achieved the last cup rank.

The German Kart Championship is going to continue in five weeks. In Belgian Genk, drivers are going to fight for the halftime-championship in the highest German kart racing series. Full fields of participants are expected only a few days before the finale of the CIK-FIA European Championship, also in Genk.