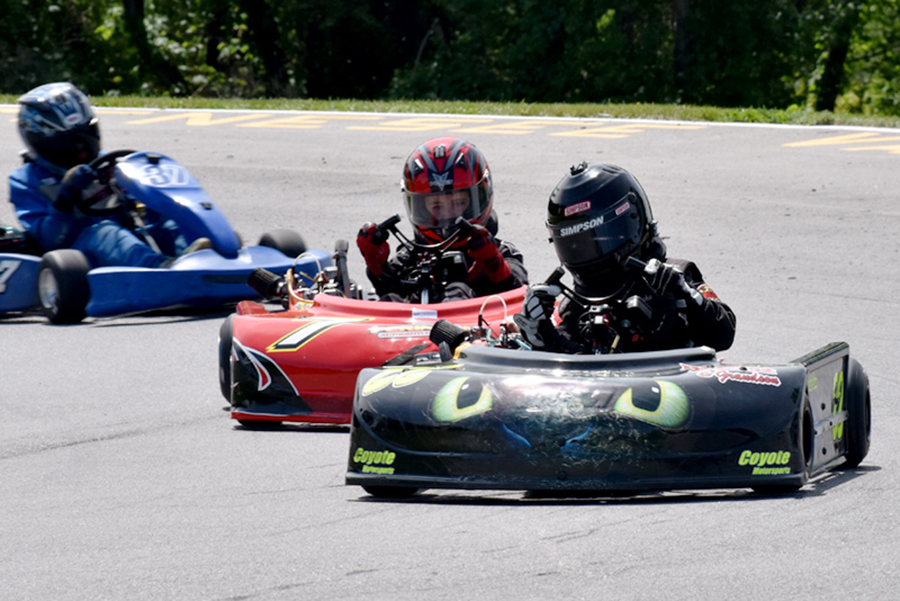 Young Blake Boon was the big winner on the weekend, netting four feature wins aboard his two new #22 Coyote Wide Tracks. Blake scored wins in LO206 Cadet and Pro Gas Animal Cadet both days. He did it in the dry on Saturday and backed up the wins in wet conditions throughout Sunday’s competition.

Joining Blake in the 206 Cadet division was Joey Cline, who drove his Coyote to a P3 finish Saturday and a strong runner-up finish to Blake in Sunday’s 12-lap 206 Cadet main.  Joey did a terrific job in the rain Sunday and we’re looking forward to good things from this youngster in the future!

Newcomer Colton Brown, of Camden, NY, raced his Coyote to wins in both day’s Comer Kid Kart features.  Colton looked fast all weekend and we can already see good things coming in the future from this young driver.

Our own Jim Lipari competed Saturday at the AKRA Avon event. Lipari entered 206 Senior Medium and Pro Gas Animal. He drove to a win in the Pro Gas Animal main event over good friend Jason Zobkiw, who was on his #4 Coyote Wide Track.  Coyote drivers swept the top five positions in Pro Gas Animal with Trentin Frederick, Dylan Weber and Anthony DiMaggio trailing Lipari and Zobkiw across the stripe.

Jim added a P2 finish in 206 Senior Medium. Lipari led part of the contest before settling for second.

Lipari opted to help customers on Sunday instead of race, and Jason Zobkiw took advantage by sweeping the Pro Gas Animal division. Zobkiw won the pole, heat and pulled away for an easy win in the main event. Weber and DiMaggio waged a spirited battled for the P2 position with DiMaggio working on Weber all race and finally making the pass with less than 2 laps to go. Frederick was fourth.

Thanks to AKRA for coming to Avon and putting on a great event. And thanks to all Coyote customers and supporters who attended!

Next on the Coyote Motorsports schedule is Round 2 of the WKA Gold Cup Series, set for June 24-26 at Carolina Motorsports Park in Kershaw, SC.