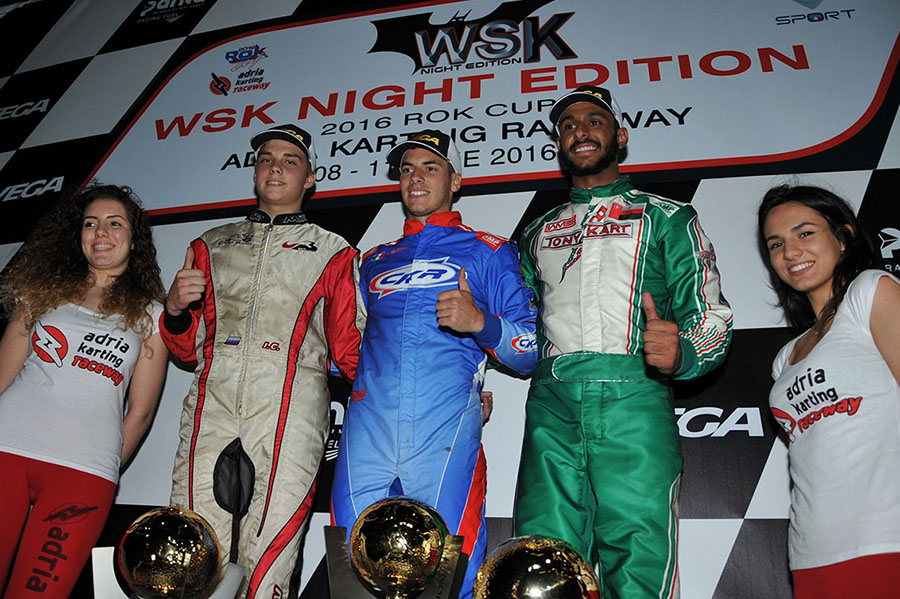 Despite they were racing at night, the drivers of the WSK Night Edition did not lose their grit: they were the protagonists of thrilling and uncertain races at the Adria Karting Raceway. The night race of the WSK Promotion calendar awarded its trophies on Saturday night, under the artificial light provided by the lighting system of the facility: the ideal battleground for drivers coming from all around the world, eager to challenge each other in this single round event, despite many of them are still engaged in the international championships in this period of the year. The competition at the circuit in Adria was reserved to the KZ2, OK and OK Junior international categories, together with the 60 Mini and the single-make categories of the Rok Cup Challenge.

Smolyar and Bogdanov, the Russian powers in OK and OKJ

In the race for OK and OK Junior, the Russian drivers Alexander Smolyar (Tony Kart-Vortex-Vega) and Dimitrii Bogdanov (FA Alonso-Vortex) won in the Final. Smolyar recovered in the OK, winning ahead of the Chinese Sun Yue Yang (FA Alonso-Vortex). In OKJ, Bogdanov, too, recovered the many positions he had lost in the qualifying heats. Then, the race turning point came when the Moroccan Sami Taoufik (FA Alonso-Vortex), the leader, was forced to stop because of a contact with the Swedish Isac Blomqvist (Tony Kart-Vortex). So, Bogdanov secured the leadership and won ahead of his fellow countryman Ilya Morozof, who placed second after an outstanding recovery, and the Italian Alessandro Giardelli (both on Tony Kart-Vortex).

Bedrin wins hands down in the 60 Mini

The Russian Nikita Bedrin (Tony Kart-TM-Vega) conquered the 60 Mini, the most crowded class at Adria, fending off every attack until he managed to gain the leadership and to win the final. The Italian Pietro Delli Guanti (BirelArt-TM) was unluky at the start and dropped back from the front row to the last positions. So, it was the Italian Federico Cecchi who tried to grab the leadership but, two laps later, Bedrin was back in first position and kept it until the finishing line. Behind Cecchi, the runner-up, the excellent Italian Luigi Coluccio (Tony Kart-Vortex), who recovered from the 6th row on the grid.

The Italian Alessandro Pelizzari (CKR-TM-Vega) won in KZ2, showing his potential since Friday’s qualifying. In the final, the Russian Ivan Chubarov (Croc-TM) followed him closely without losing contact and finished second, ahead of the driver from Oman Abdullah Al Rawahi (Tony Kart-Vortex), who scored the last podium position.

The Winners of the Rok categories