eKartingNews.com Driver of the Month: May 2016 – Braden Eves Ladies and gentleman, there is a new challenger within the TaG rankings in North America. That driver is Braden Eves and May was a breakout month for the driver hoping to one day finish first across the yard of bricks at the Indianapolis 500. Eves is entering his first full season in the Senior ranks, having moved up at selected evens until permanently midway through last summer. The now 17-year-old has positioned himself as one of the top drivers following a win at both the Superkarts! USA SpringNationals and the United States Pro Kart Series opener.

The first trip took Eves back to the Phoenix Kart Racing Association where as a Senior rookie he recorded finishes of 11th and 15th a year ago. The Jay Howard’s Motorsport Driver Development driver ran top-five throughout the first day for qualifying and the two heat races. Eves got the jump on polesitter Ryan Norberg and led the opening six laps of the wet main event. Norberg worked past to retake the position bringing Senior rookie Zach Holden with him. Eventually, Eves was pushed back to the fifth spot by the checkered flag, and then penalized two positions for a missing chain guard to classify Braden in the seventh position. 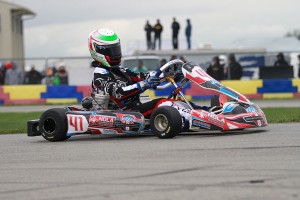 The following day was even better, remaining in the top-three to keep the pressure on Norberg along with fellow midwest star Brandon Lemke. Once again, Eves got the jump on the field as the lights went off to begin the Final. Lots of jostling took place in the opening laps, with Eves able to escape with a solid lead. Braden drove away to a near one-second advantage for his first SKUSA Pro Tour victory. Eves is now the SKUSA Pro Tour point leader heading to the SummerNationals set for July 22-24 in Indiana.

Two weeks later was a trip to the nearby New Castle Motorsports Park for the Ohio native with the opening event of the United States Pro Kart Series. Eves began Round One with fast time in qualifying to hold the pole position for the two heat races. In each race, Eves would lose the top spot, dropping back to fifth in the first moto and just back to second in the next. Brandon Lemke earned the pole position for the main event and controlled the position for the first half of the race. Eves led a trio of Armin Cavkusic and Austin Garrison to reel in Lemke in the closing laps of the race. Braden took over the lead on lap 13, holding off the group to secure his first USPKS Senior victory.

Sunday began similar with Eves earning fast lap in qualifying and driving to the wins in both heat races. The Final was the opposite from Saturday. Braden drove away early in his Kosmic machine until Lemke and a host of others joined him. Eventually, Eves crossed the checkered flag in the fifth position. While the weekend did not end as hoped, Braden left in the second position in the standings.

The two weekends of strong results helped to jump Eves into the fourth position in the EKN TaG Driver Rankings. With the full USPKS, SKUSA and WKA schedules on his calendar, there is no doubt the more success will lead him into challenging for the #1 position as the season moves on. Chassis: Kosmic Racing Kart
Engine/Engine Builder: Allison Racing Engines X30
Sponsors: Jay Howard’s Motorsports Driver Development, Allison Racing Engines, Zero Error Racing
Series You Compete In: SKUSA Pro Tour, US Pro Kart Series, WKA Winter Cup, WKA Manufacturer’s Cup
Years Karting: 11
How did you get started in karting? My father did indoor karting and thought it would be fun for the family, so we all started karting at Circleville Raceway.
What has been the high point in your racing career? Winning the SKUSA SpringNationals in X30 Senior
What are your goals in racing? To make it to IndyCar
In a few words, how would you describe your driving style? Smooth and precise
Funniest moment at the race track? When Matt Solarczyk took out his teammate Andre Castro in the chicane at USPKS MRP 2014 by flying over the curb into him on the first lap

What do you do when not at the track? I practice on my simulator at home on iRacing. I’m also an Official KartKraft Beta tester.
What are your goals outside of karting? Graduate High school with 4.0 GPA
What type of street car do you drive? 1999 BMW 323i
What type of street car would you like to drive? BMW M3
What are your pet peeves or things that irritate you? The sound of people chewing.
What do you think could be done to improve the sport of karting? Get full race coverage on national television for the premier classes.
What are your favorite aspects about the sport of karting? The fact that the competition is so close that forty drivers can all be separated by just tenths of a second in qualifying.

May 2016 Driver of the Month – Honorable Mention: