Old and Young Victorious in Sonoma for California ProKart Challenge 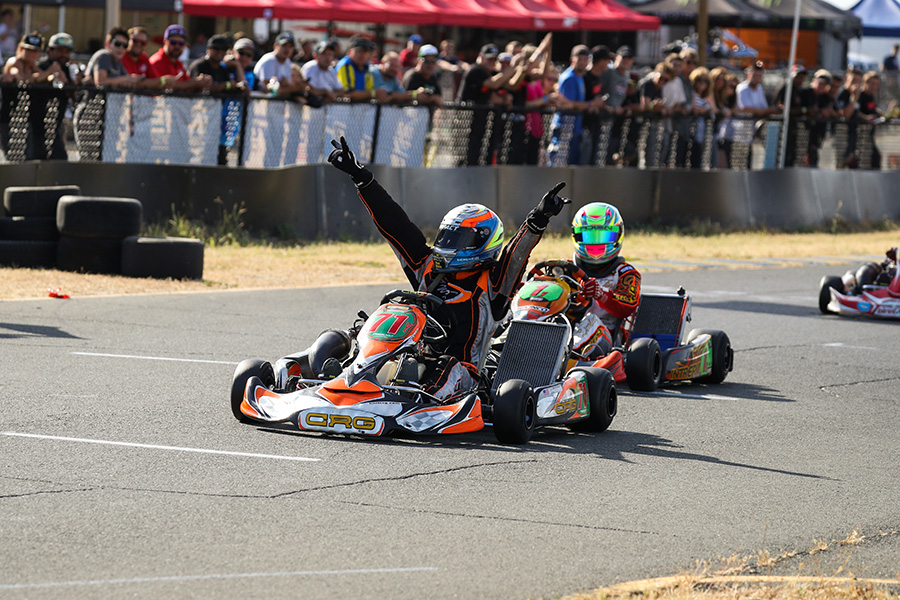 The 2016 season resumed for the California ProKart Challenge as the program traveled north to the Simraceway Performance Karting Center facility in Sonoma, California for another record-breaking event. The Superkarts! USA flagship regional program welcomed over 180 drivers on the ‘Reverse National’ layout over the two-day event (June 3-4). Racing was a mix of everything, with a few dominating performances, close finishes, repeat winners and new faces on the podium at day’s end. 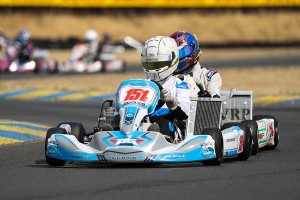 Four races, four winners now in the Phil Giebler Racing X30 Senior class with Nicky Hays becoming one of the youngest to win in the category. The day began with a great story as local driver Michael Michoff returned to the track nearly three months after having his spleen removed following an incident in Phoenix. Michoff showed the way in what was a close affair for qualifying, with Michoff’s 50.240-lap just seven hundredths quicker than Hays; Michael Avansino and championship leader Billy Musgrave were within eight hundredths. Michoff drove to the win in Heat #1 while Avansino took control in Heat #2. Hays was next in line, assuming the lead in the main event on lap two. Michoff made a late charge, coming up just short with Hays taking the checkered flag. Cody Kelleher advanced to third late, with Nick Ramirez and Musgrave making up the top five.

Now among the most experienced karters in the sport, Ron White showed the young guns in the 2Wild Karting S1 Pro Stock Moto just how to get around the Sonoma facility. Recent race winner and defending champion Jarred Campbell was quick out of the box, posting a 47.909-lap to secure the fast time in qualifying. Campbell drove away to the win in Heat #1 but saw challenge in Heat #2. Point leader and former two-time champ Billy Musgrave closed in and secured the win in the final circuit. Trouble struck for Musgrave on the opening lap of the Final, dropping a wheel on the exit of the final corner and spinning him around. That put him to the tail of the field and handing the lead over to Nic LeDuc. The NorCal driver led, with Campbell and S2 driver Callum Smith giving chase. In the process, White was rebounding from starting at the back into the top-10 overall after the opening lap. With five laps remaining, the veteran was in the hunt. He and Campbell dropped LeDuc back to third as they took the white flag, with a last lap move sticking for White to secure the lead and the victory. Campbell settled for second, with LeDuc in third. Brian Keck and S4 transfer Darren Elliott rounded out the top-five. 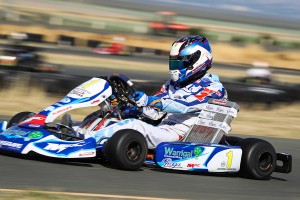 Things looked to be in the hands of point leader and local driver Hunter Pickett in the Leading Edge Motorsport S2 Semi-Pro Stock Moto division. Pickett set the pace in qualifying and was the overall leader at the checkered flag in Heat #1, besting the entire S1/S2 field. Unfortunately for him and a group of others, their race in Heat #2 ended after just one lap following an incident. This allowed Hunter Kelly to assume the top position in the S2 category with Callum Smith right behind him. Smith was able to get the jump at the start of the main event, and use a few of the S1 front-runners as a screen to keep Kelly back. At the checkered, Smith earned his second victory of the season, ahead of Kelly by just under one-second. Will Preston notched his second podium of 2016 in third, with Pickett up to fourth from the tail of the field just ahead of Dekota Fripp.

Mike Rolison jumped back to his winning ways in the 28-driver Vemme Kart/Extreme Karting X30 Master category. The Round One winner returned after missing Monterey, sweeping the action in Sonoma. Rolison left with a perfect score, leading all 14 laps of the main event and producing the fast lap of the race to a near two-second victory. Local driver and former series race winner Carlos Calderon drove to second, with Travis Irving notching his first podium of the season in third. Erik Jackson and point leader John Crow finished fourth and fifth. 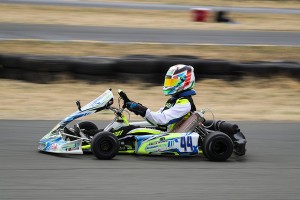 Dante Yu secured his second victory of the season in X30 Junior with an event sweep (Photo: DromoPhotos.com)

Dante Yu was another driver earning a sweep in wine country, driving to his second victory of the season in the Ryan Perry Motorsport X30 Junior class. Yu bested the 28-kart field in qualifying, both heat races and the main event, driving to a four-second advantage for a perfect score on the day. Point leader Oliver Calvo was among the drivers fighting for the second spot when contact shuffled up the order, dropping him down to the 20th position and unable to take the checkered flag. Jacob Hudson benefitted to earn his first podium of the season in second, with Trey Brown in third. Ryan Schartau and Gary Lyles completed the top-five.

The largest category of the weekend was the PKS Professional Kart Support Mini Swift division at 31 drivers. Nearly all had a chance at winning, with multiple drivers showing pace to challenge; however, the final checkered flew for Jace Jones. Only 37 thousandths separated Jonathon Portz and Bryce Stevens in qualifying, with the advantage going to Portz. The heat races were Stephen Brucker at the front of the field. Heat #1 was a close finish as he edged out Stevens by 79 thousandths of a second, with Brucker pulling out by three tenths in Heat #2. The two were joined by Jones, Portz and Cole Cotham in a five-driver battle for the 12-lap main. In the end, after a great show put on by the young drivers, Jones crossed the line first by just 58 thousandths ahead of Brucker. Stevens completed the podium finishing ahead of Cotham and Portz. 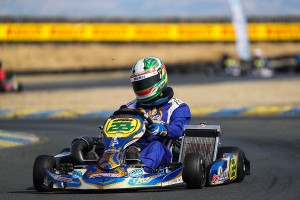 S3 was swept by Royal McKee at Round Four (Photo: DromoPhotos.com)

The Outsource Utility Contractor S3 Novice Stock Moto class was a sweep by Royal McKee, leading all on track sessions. The victory was McKee’s second on the year, closing up the championship chase with point leader Garrett McKelvie, who finished third. Morghan Loganathan landed a second podium finish of the year, placing runner-up. Prescott Campbell and Evan Jonker rounded out the top-five. Kai Sorensen won a third straight in the Top Kart USA Micro Swift division. The Sonoma event was his second perfect score of the season, driving away to an eight-second victory in the main event. Kailey Meris and Frankie Mossman joined him on the podium, with Piers Aspiras and Enzo Deligny placing fourth and fifth.

The day was a duel between Gianfranco Casadei and Rene Martinelli in the Nash Motorsportz S4 Master Stock Moto category. Casadei struck first in qualifying, with the two drivers splitting the heat races. Martinelli grabbed the holeshot and led the entire 14-lap main event for victory in his first series start of 2016. Round Three winner Robert Marks advanced up to second, with Vivek Tandon in third. A jump start penalty dropped Tandon two positions, placing Casadei back on the podium in third and put former S1 champion Clinton Schoombee into fourth in his S4 debut. 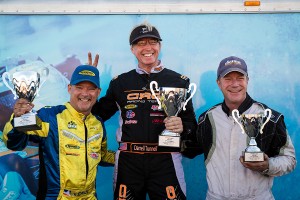 Darrell Tunnell came away with his first victory in the Mike Manning Karting S4 Super Master class. 2015 Streets of Lancaster Grand Prix winner Patrick O’Neill and Round Three winner PP Mastro went back and forth throughout the day for the top spot. O’Neill set fast time in qualifying and was P1 after Heat #2. Troubles at the start of the race dropped O’Neill out of the race and Heat #1 winner Mastro to the tail of the field. This gave Tunnell the path to victory, out-running defending champion Ken Schilling by over four seconds. Mastro was up to third until he retired on the final lap, giving Rod Streed the third step on the podium. Dean Heldt’s streak in the Rolison Performance Group S5 Junior Stock Moto class closed at three with Kent Hatada winning in Sonoma. Hatada took advantage of contact ending the race of Ryan P. Lewis and heat race winner Jacopo Pizzinato on the final lap of the main event to reach the checkered flag first. Heldt retired early, missing out on continuing his main event win streak and the podium.

The California ProKart Challenge takes another extended break with the focus for many drivers turning to the 2016 SKUSA Pro Tour SummerNationals, set for a return to the New Castle Motorsports Park facility in Indiana on July 22-24. The regional series resumes on August 26-27 at the Santa Maria Kart Track. More details on the event will be posted shortly, along with the championship point standings to date. For more info on anything related to Superkarts! USA, please visit the website – www.superkartsusa.com and be sure to follow the Superkarts! USA Facebook page and Twitter account – or call the SKUSA head office at 951-491-0808.