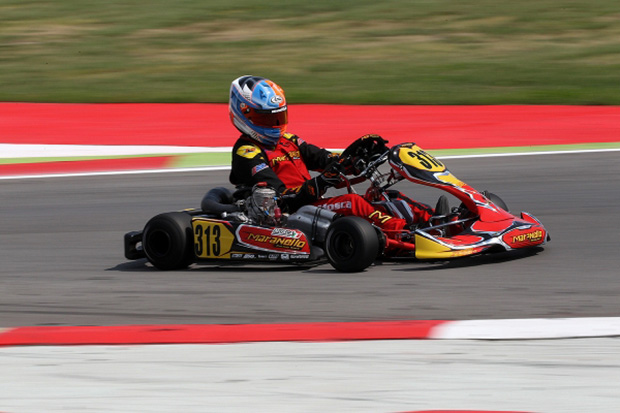 Rain spoiled the end result of Tommaso Mosca. Fourth at the flag, he was then demoted to P8 due to an unlucky racing contact but set the third fastest lap of the race anyway. Alberto Cavalieri had to retire from the Final due to a puncture in what still remains a good debut on the new Modena MKZ engine.

The second round of the CIK-FIA European Championship held at the circuit of Adria has certainly been a tough weekend, but also an exciting one. The two Maranello Kart’s drivers Tommaso Mosca and Alberto Cavalieri have been among the main protagonists of the event.

The end result did not pay off the huge work completed by the team and by the two Maranello Kart’s drivers, especially due to the changing weather conditions that created some issues in the heats and in the final stages.

The weekend ended with Tommaso Mosca clinching a great fourth place in the Final, before being handed a 10s time penalty due to the dropped front fairing after a contact, event that relegated him to the eighth place. Alberto Cavalieri had to retire due to a puncture when also running a great round himself.

The two Maranello Kart’s drivers have put in a crescendo of results in Adria. Tommaso Mosca has been assisted by SG Race led by Stefano Griggio and Rizzi for TM engines, while Alberto Cavalieri by Officina del Kart with a works Modena Engines unit. Both drivers have been recovering from some bad luck in qualifying and heats. Mosca was handed two time penalties due to the front fairing rule in the heats, while Cavalieri was penalized for underweight following a chassis change due to the changing weather conditions. Despite these hiccups, the two drivers managed to get through to the final stages, as Mosca secured the eighth place in the Prefinal and  Cavalieri the 15th.

The Final started on dry tarmac and Mosca put in a series of quick laps (he posted the third fastest lap of the race) closing in on the front runners, even when rain made the track slippery towards the end of the race. When the race was red flagged due to the very difficult track conditions, he was holding the fourth place. Unfortunately, Mosca was handed yet another penalty at the end of the race, as his front fairing had been damaged in a contact and was demoted to the eighth place. Running on slick tyres in wet conditions does certainly not help avoiding contacts. Regulations are strict, but perhaps an exception could have been made in Adria, as happened last year in Genk.

Cavalieri was forced to the retirement instead due to a puncture. His performance has been positive anyway, especially considering the development work started on the new works engine  Modena Engines MKZ.

The third and final round of the KZ2 European Championship is scheduled for next July 31st in Genk (Belgium).