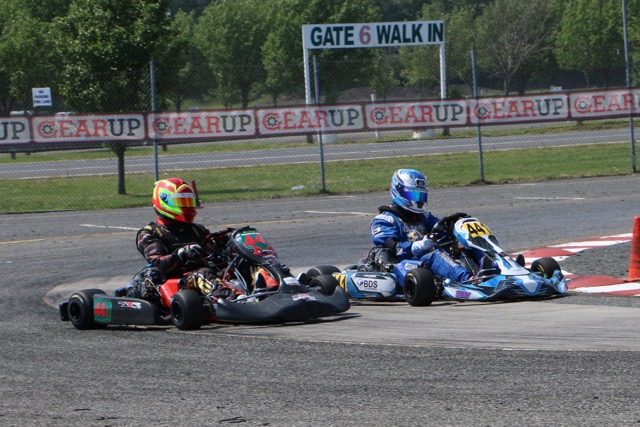 Josh Lane (44j) and Jason Alden (441) battle their way around the track in their Modena-powered karts.
(Photo: Susan Rothenhoefer)

It was an outstanding weekend for Modena Engines USA at round two of the F Series Gearup Challenge with two podium finishes in the Shifter KZ class for the brand. Josh Lane in the 44j came in second by just three tenths of a second, while Rory Van der Steur (19n) claimed third just behind him. Six drivers in total competed on the Modena engine package at the Raceway Park track, with four of those drivers finishing in the top-ten.

As in previous races, Josh Lane demonstrated the excellent power behind the Modena engine. After having some trouble in the qualifying and prefinal, Lane had to start from the back in the final. It was a great battle to the front for Lane as he fought his way through the pack and worked to close the gap on the leader. He ended with an outstanding second place finish. Lane also clocked the fastest lap time even while pushing through the field of 20 drivers.

Jason Alden (441), who was also running the Modena engine, had a great showing at the event, finishing just shy of the podium with a fourth place effort in the main event and set the second fastest lap time.

Alden too was very pleased with Modena. “I am extremely happy with the engine performance. The reliability of this KZ engine is coupled with the ease of tuning it to accommodate for both changing track and weather conditions.”

Modena Engines will be on track again in just under a month at round three of the F Series Gearup Challenge at the Pittsburgh International Race Complex. To learn more about how you can get on board a Modena package, contact Phil Davis at info@modenaenginesusa.com or 301-667-1320. Be sure to visit www.modenaenginesusa.com and follow on social media @modenaenginesusa to stay up-to-date with the latest news and results.