With 87 entries, Race #3 of the Sanzaru Games Karting Championship had the largest turnout of the year. The Pro National configuration brought all the racers back to the configuration that they had been testing on all winter, meaning a lot of drivers were up to speed and this made the fields close. The Senior Rotax GoPro feature helped bring out some extra drivers and this feature was the most exciting GoPro feature of the year so far! 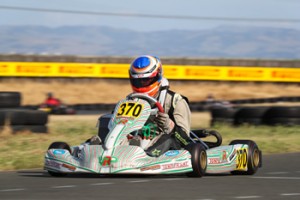 A strong field of karts showed up with a couple of hot shoes coming out to try to wrestle away the GoPro Hero4 from the series regulars. Past class champion Carlos Calderon put his kart on the pole ahead of class regular Zach Pettinicchi and expert shifter Tom Dyer who had not been in a clutch kart for some years. In the first Pre-Main, Carlos and Zach battled up front with Tom right behind. Tom then tried to pass both Zach and Carlos going into turn one but over shot the turn and lost several positions. In the end Carlos held off Zack for the win, Enzo Prevost 3rd and Kyle Loh a close 4th. In the Second Pre-Main, the race positions changed constantly amongst the top 4 karts with Enzo coming out in front at the end of the 8 lap race. Tom took 2nd, Zach 3rd, Carlos 4th and Kyle 5th. In the Main, the top 5 karts pulled away from the rest of the pack with Zach taking the early lead and being pressured by Carlos and Tom the whole way. Zach’s set up allowed him the open up a bit of a lead on the next 4 karts and he was able to drive on to a 3 second win, Carlos 2nd, Tom 3rd, Enzo 4th and Kyle 5th, this group separated by less than a quarter of a second at race end. For the win, Zach took home the GoPro Hero4 and the top three drivers also getting $75/$50/$30 of Sanzaru Bucks.

Five Kid Karts showed up on Saturday for the second running of the year of this the newest class in the Sanzaru Series. In Qualifying, Oscar Illife took the pole ahead of his younger brother Jack followed by Christian Cameron, Andrew Freire and Gage Brockway. Oscar, Jack and Andrew were in Comer karts with Christian and Gage in Honda karts. In the Pre-Main, the more experienced Oscar took the early lead and never looked back as he went on to the win, Jack 2nd, Andrew 3rd Christian 4th and Gage 5th. In the Main, Oscar again took the early lead with Jack and Andrew following. Oscar had a rather large and comfortable lead when he started experiencing some carb problems and started slowing. On the last lap, Jack was able to catch and pass Oscar and drove on the win, Oscar holding onto 2nd, Andrew 3rd with Gage coming home 4th ahead of Christian in 5th. Jack took the Comer class win while Gage took the Honda class win. 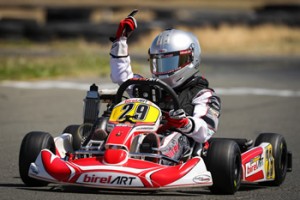 With a great turnout of 12 drivers, the Micro Max class put on a good show. Christian Legaspi took the pole ahead of Sebastiaan Mulder and Ryan Persing. In the first Pre-Main, Sebastiaan took the early lead and held off Christian for the win, Christian 2nd, Ryan 3rd and Piers Aspiras 4th. In the second Pre-Main, Christian took the early lead this time and held off Sebastiaan for the win, Sebastian 2nd, Ryan 3rd and Piers 4th. In the Main, Christian took the lead out of turn one followed by Sebastiaan. Sebastiaan unexpectedly spun on the first lap and had to rejoin the race in last. Skyler Geczi worked his way past Ryan to take over 2nd with Piers and Andrew Rivera close behind. All the while, Sebastiaan was working his way through the field. On lap 11, Sebastiaan was working on passing Piers when the two came together. Sebastiaan was able to continue on but Piers’ day was done. In the end, Christian drove on to the a 4 second win, Skyler held on for 2nd with Ryan in 3rd just one tenth of a second behind, Sebastiaan recovering to take 4th and Andrew Rivera coming home 5th. This was Ryan Persing’s first podium finish in the Sanzaru Series. Sanzaru Bucks of $75/$50/$30 went to the top three drivers. 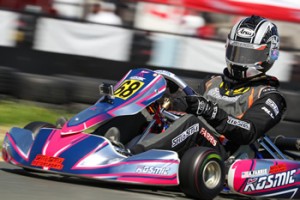 With another strong field in this class, Aaron Farris took the pole ahead of Kelly Heil and John Breidinger. In the first Pre-Main, Heil was able to get into the lead and hold off the pressure from Farris to take the win, Roman Alekseenkov 3rd and Vijay Nagarajan 4th. In the second Pre-Main, Heil got the best of Farris in the early portions of the race to take a slim win, Farris 2nd, Bob Olson working his way into 3rd with Nagarajan 4th. In the Main, Heil and Farris battled for the lead early with Farris getting in front and having to take all the pressure that Heil could muster. This was Farris’ first time leading late into a race and he was under strong pressure, but Farris focused well and did not make a mistake to drive onto his first Series win. Heil took 2nd, just twenty three thousandths of a second back. Alekseenkov 3rd less than a second back, John Breidinger recovering from two poor heats to take 4th and Nagarajan 5th.

Junior Rotax was the largest class of the day with Bryson Lew taking the pole ahead of Nick Persing and returning Junior veteran Chase Farley. In the first Pre-Main, Bryson took the early lead with Persing spinning at the exit of turn one sending to the back of the pack. Lew held the front with pressure from Farley and Colin Mullan. In the end, Lew took the win, Farley 2nd, Mullan 3rd and Bijoy Garg 4th. In the second Pre-Main, Lew and Farley led the field again with Mullan, Ryan Tate and Clayton Williams right behind. Lew went on to win the race with the finishing order remaining the same as the first race. For the Main, Lew and Farley shared the front row. Farley got into the early lead with Mullan getting by Lew to stay close. Lew and Tate had a strong battle for 3rd with Williams and Brennan Stammer battling for 5th. At the finish, Farley took the win, Mullan 2nd a half second back, Tate got by Lew for 3rd, Lew 4th and Stammer got by Williams to take 5th. This was Farley’s first win in the Sanzaru Series and Tate’s first podium in the Series. 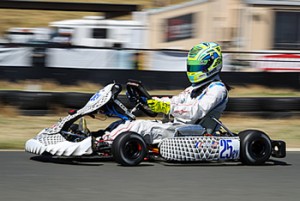 In the E kart class there were a couple of new faces in the lineup. In Qualifying, Pro Stock driver Hunter Pickett took the pole ahead of Enzo Prevost with the second newcomer Colette Davis taking 3rd. In the first Pre-Main, Prevost and Pickett battled up front the entire way with Prevost taking the win, Pickett second and Colette Davis 3rd. In the second Pre-Main, Prevost and Pickett again battled for the lead with the same result as the first race. Prevost took the win, Pickett 2nd, Davis 3rd and Richard Hilleman 4th. In the Main, the battle was again between Prevost and Pickett with Prevost opening up a small lead. Davis’ kart had problems and she had to retire on lap 8. Going into the last lap, it looked like Pickett may have a chance, but Prevost managed his power to have the speed to hold off any challenge. Prevost took the win, Pickett 2nd, Hilleman 3rd and Charles Stimmler 4th.

With a light field of karts, this was a good opportunity for all the drivers to pick up some points on those that could not make this race. Charles Hastings took the pole ahead of John Collins, Allen Miller and Dave Holstein. In the first Pre-Main, Miller took the initial lead at the drop of the flag with Collins falling back to 4th. At the end, Hastings regained the lead and took the win, Collins recovered to come home 2nd followed by Miller and Holstein. In the second Pre-Main, Hastings took the early lead with Collins falling back on the start into 4th. Hastings went on to the win, Holstein 2nd, Miller 3rd and Collins not able to recover to come home 4th. In the Main, Hastings again took the early lead followed by Collins. Hastings day came to a bad end when a water hose came adrift and he had to pull off, sadly this was the second race in a row that Hastings DNF’d while in the race lead. Collins took up the front position and went on to a 6 second win over Miller with Holstein in 3rd. 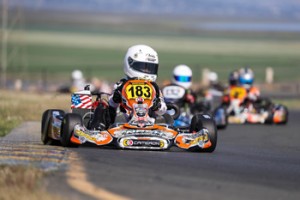 A twelve kart field took to the track with Grant Langon taking the pole ahead of Dustin Salaverria and Garrette Randolph Jr. In the first Pre-Main, Dustin took the early lead and was never really challenged with Grant coming home 2nd, Owen McAlister moving up one spot to take 3rd and Aiden O’Neill 4th. In the second Pre-Main, Dustin went into the lead coming out of turn one closely followed by Grant. Owen and Aiden battled for the next spot with Aiden coming home 3rd, Owen 4th. In the Main, Dustin again controlled the race from the front with Grant a strong 2nd. There was also some great battles in the race right behind the leading duo. At the Checker, Garrette came back from a couple sub-par heats and took 3rd followed by Owen in 4th and Matteo Sandoval working his way up the 5th by the checkered flag. Dustin took the $75 in Sanzaru Bucks, Grant got $50 and Garrette $30 in Sanzaru Bucks.

Jim Inglebright took the pole in the 250 class ahead of Richard Stock and Pablo Carballedo. Rene Martinelli was the fastest overall in his DD2. In the first Pre-Main, The top three 250 qualifiers battled the entire 8 laps with Pablo taking a one second win followed by Inglebright and Stock with Martinelli coming home 5th overall in the DD2. The second Pre-Main was a repeat of the first race with Pablo coming out on top again, Inglebright 2nd, Stock 3rd and Martinelli’s DD2 4th. In the Main, Pablo and Stock did all of the battling for the lead with Inglebright a bit back. Late in the race, Stock held the lead with Pablo looking for a way by. On the last lap, Pablo saw a small opening and made his move only to slide into Stock and punting him off the corner. Stock was finished and on the side of the track, Pablo rolled into the pits. Jim Inglebright took advantage crossing the checkered flag the winner. Ori Della Penna took 2nd, Richard Hilleman 3rd with Martinelli coming home 4th in his DD2.

The next race will be June 12 where the track configuration will be the Reverse National Track and the GoPro Feature class will be EVO Electrics.