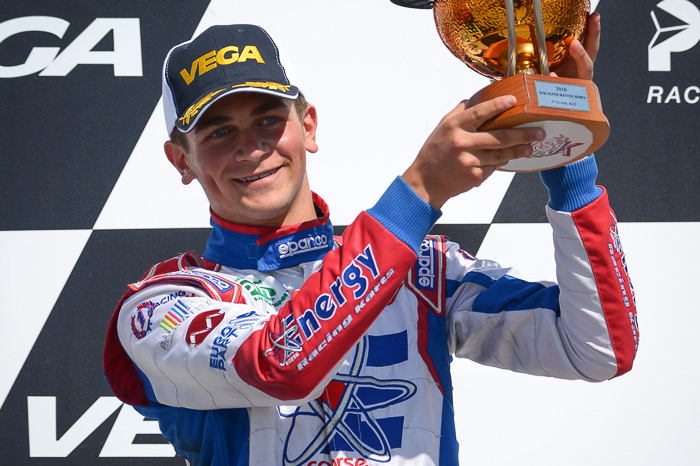 The Energy Corse team continues to excel in training young drivers, equipment preparation and technical decisions. The recent performances on the international scene prove it, with the podium obtained by “Alex” in the final classification of the WSK Super Master Series. The Italian karts were also fighting at the front in the 60 Mini category, without forgetting the other podiums in Asia, the United Arab Emirates and Canada…

WSK: A brilliant progression for Alex in KZ2

“Alex” was one of the most consistent drivers at the front of the pack in KZ2 in the WSK Super Master Series. Already on the podium at the opening round at Castelletto, he then scored many top positions at the following races. Overall, he finished in a brilliant 3rd place at the wheel of his Energy-TM.

Countless Junior drivers have trained by Mick Panigada’s team with a number of successes for over 10 years. At Adria, the Frenchman Theo Nouet confirmed his progress in the very tough OK-Junior class. On the pace right from the time trials, he didn’t always see success later on, but finished 2nd in his last qualifying heat. Eventually, he easily qualified for the Final and kept gaining experience. Promising!

60 Mini: Double podium in the WSK

Many drivers and teams have chosen the Energy chassis in the 60 Mini class with good results. Francesco Pizzi (Giugliano Kart) and Gabriele Mini finished 2nd and 3rd respectively in the final classification of the WSK Super Master Series after four races in 2016. Roman Stanek and Leonardo Caglioni also finished in style at Adria, bringing to four the number of Energy chassis in the top six of the WSK. Note that Gabriele Mini had already had the honour of starting the Italian Championship with a victory at Castelletto.

A fastest lap at the European KZ2 Championship!

Despite the weather not always being easy to manage and a very abrasive track which put a strain on the tyres, Energy Corse was able to avoid the pitfalls of the first round of the European KZ2 Championship in late April at Aunay les Bois. In France, Alessandro “Alex” Irlando rebounded to 6th position, with the fastest lap in the Final. Energy Corse certainly remains a benchmark team in KZ2.

Europe is not the only playground for the Italian brand. Under the leadership of Josh Hunt, a talented former driver and now head of Energy Corse Asia, Energy has made a great breakthrough in the Asian market. Through excellent coaching and equipment at the top, the results have already been numerous lately: Junior Champion and 3rd in the Mini Rok Cup Asia, Vice Junior Champion at the Rok Cup Singapore, 3rd in Cadet in the X30 Challenge Malaysia and numerous performances in the X30 Challenge Singapore (3rd and 6th in Cadet, 4th and 8th in Senior, 4th in Master and 2nd in Veterans)!

Winner in Rotax DD2 in Canada

At the Eastern Canadian Championship at Stouffville on May 21st-22nd, Marco Signoretti completed a wonderful weekend with his Energy chassis. The winner on Saturday in Briggs and Stratton Senior, he impressed in Rotax DD2 with a formidable ascent that ended in victory! Ryland Duesburry (4th and 5th in Rotax Mini Max), Eamon Lowe (8th in Rotax Junior) and Dante Lerra (6th in Rotax DD2) also shone. Congratulations to Team Energy Kart Canada.

X30 Shifter and Cadet in the UAE

In April, Energy Dubai won two UAE Champion titles in the X30 Challenge. Sean Babington was crowned in Shifter, while Alex Connor and Jamie Day took the Cadet double! Congratulations to Ali Al Nijjar and Kevin Day, 2nd and 3rd respectively in Master, and all the other drivers of the team.