Despite the current perception that kart racing is in a major national slump in terms of participation from coast-to-coast, the truth is that there are many clubs and regions that are enjoying a positive resurgence in numbers, many thanks to the growing Briggs 206 four-cycle program.  International Kart Federation (IKF) Arizona Governor Bernie Lacotta was instrumental in bringing the Briggs World Formula and 206 programs into the Phoenix Kart Racing Association, and the affordability of these packages have helped to revitalize the club, which also offers Rotax, IAME and Shifter classes.  Lacotta feels that the 206 will certainly be a key strategy in rebuilding the IKF, especially in Southern California, where affordable club karting is almost non-existent. 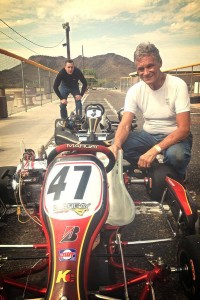 There has been much talk on social media and in our EKN forums in regards to the challenges that SoCal karting is currently facing, in terms of more affordable club level karting. Superkarts! USA’s travelling ProKart Challenge is extremely well-supported in SoCal, drawing 150+ drivers to their events, as is the Los Angeles Karting Championship (LAKC), which is based at CalSpeed Karting in Fontana.  While these organizations are strong, the collateral damage of their growth has been the other kart clubs in the state.  The once vibrant IKF Region 7 has withered away with the slow decline of clubs like the Tri-C Karters, and the closure of the So-Cal Sprinters group.  Tri-C is fighting back with Briggs and Yamaha competition, but the simple fact is that the remaining tracks in the state do not have club programs, which is crucial to the overall health of the sport.  While the numbers in the SKUSA and LAKC series are strong, they do not represent the total number of karters that once made California the hot bed of karting in the US.  Yes, regional racing is still healthy, but the foundation of the sport – club karting – is in real trouble in Southern California.

Along with many others, Lacotta has accepted this reality and has been vocal on his thoughts on how to rebuild IKF Region 7, and this approach includes a focus on the grassroots Briggs 206 program.  EKN took the time to speak with Bernie and discuss his ideas and to allow him to present the successes they were able to achieve putting the program into place with the PKRA.

eKartingNews.com: Bernie, we picked up your desire to help rebuild the IKF’s Region 7 program after you posted to the EKN forums. It’s true that the region has struggled over the past few years and is in truth absent, having been replaced by the SKUSA ProKart Challenge and the LAKC.  Rebuilding the local clubs with the Briggs 206 is working all over the country, but has not yet been fully embraced by the SoCal karting industry or community.  Please offer your thoughts on the situation.

Bernie Lacotta: A few years ago, So-Cal Sprinters and the Tri-C club had a healthy Briggs World Formula group. But today, So-Cal Sprinters has closed up operations and Tri-C is hanging on and still offering World Formula classes, and they’ve started an LO206 class, as well.  Part of the problem of getting four-cycle racing going there is that the kart shops regard it as a low-volume, low-profit program. Ironically, that is what is needed to keep tracks open and introduce new racers to the sport. If tracks close, shops close. Four-cycle racing in Arizona has kept the doors open for shops that have revised their business plan in accordance with the changing market. Someone or some group will have to take the lead in the area and educate the karting public on the grassroots aspect of the sport.  It’s pretty easy for new karters to be starry-eyed about the high-end classes without realizing the financial aspect. 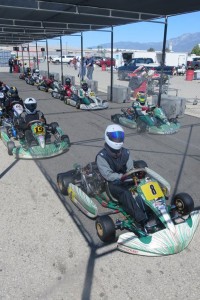 World Formula and LO206 competition continues to grow along the west coast, including IKF Region 7 area

EKN: Bernie, can you give us some insight into what the Briggs World Formula and 206 program did to help stabilize the PKRA?

BL: In 2010, two of us showed up at PKRA with World Formulas. We were allowed to run with the KT100s. The WF’s were quite the oddity, but as time went on, the racers realized I was racing in California on Saturdays and in Phoenix on Sunday. I had an engine that can do that! My idea of the WF class was to get new racers into the sport. Before long, the WF class was by far the biggest class at over 30 entries, where most classes would struggle to reach 10.  And it was mostly new kart racers. As time went on, the World Formula class found local national caliber racers entering it because of the fantastic racing and level of competition, not to mention the greatly reduced cost of racing.  World Formula expanded to three classes: WF Medium, WF Masters, and WF Junior. It is so competitive that it is now difficult to consider it a ‘beginners’ class, so the LO206 has been added to the mix and the club now has a very substantial base of consistent club racers.

EKN: You hit up the EKN forums to state your position on wanting to revitalize the IKF Region 7.  Do you have any solid plans or concepts on the table that you think could help?  I assume you’d like to suggest the further introduction of the World Formula and 206 programs to California.  Feel free to use this pulpit to get the word out.  What would you like to see happen in the immediate weeks ahead?

BL: IKF Region 7 (SoCal, Arizona and Southern Nevada) has seen regional championships go by the wayside. By far and away, travel costs are the biggest reason for this, along with the loss of tracks and clubs in the region. My thoughts were to address travel expense first. Using the Briggs Weekly Racing Series as a model, I propose to have clubs/tracks set eight dates in their annual schedule to be IKF regional points races of which the top-seven points races would count as the racers’ total. Each track enrolled in the series would then have a list of racers who would be ‘invited’ to compete in a Regional Championship race, requiring only one race in which to travel.

Hopefully, this concept would encourage more local participation at home tracks. It’s just an idea and there are much more details involved, but I believe it has merit. This is not meant to be exclusive to four-cycles. As far as immediate action, I would hope tracks would embrace the concept of getting racers on the track with classes based on local interests rather than classes based on the big national series. Certainly run those classes at your track if interest is there, but do not make those classes the only ones offered. The high dollar, high maintenance engines are not the mix you need to keep the club/track open. 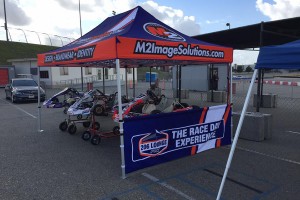 Forever, I have heard that “youth is the future of our track”. Well, I somewhat disagree. While youth is the future, they are not who pays the bills. Karting is both a path to future racing endeavors (ie: Max Verstappen) or a destination, those of us racing for the sake of racing. I suggest that the latter is where a club’s attention should be on in order to keep its operation healthy. For clubs such as PKRA, that owns its own track, it is essential.

EKN: Bernie, we certainly agree that what works regional and nationally is certainly not the best approach for club level racing, where affordability is a key selling point.  The PKRA has put together a strong program and the Tri-C Karters in SoCal are working hard as well, coming off a strong event that included 11 drivers in World Formula and six in Briggs 206, which include the cool new ‘206 Lounge’ program by Full Throttle Karting, which is aimed at introducing new people to karting at a very affordable all-in price.  That said, let’s keep the discussion moving.  There is a thread in the EKN forums (CLICK HERE), and you can also provide your email if you like, so that people that contact you directly.  Is there anything else you’d like to add?

BL: Please do provide my e-mail (Bernie Lacotta – surflacotta@gmail.com) I’m looking forward to helping anyone bolster club karting anywhere.  This interview just allows me to touch on the highlights of the situation of club racing and I do appreciate the opportunity to do so. The message that I am trying to get across is that club racing, in order to stay alive, must concentrate on a high volume, low cost group of classes. Allow any and all classes that are feasible, but concentrate on low cost classes that offer stability and encourage long-time participation for all involved. The engine of the week, changing rules annually, the attempt to race high maintenance engines on a club level (more than once a month) is not a long-term answer.