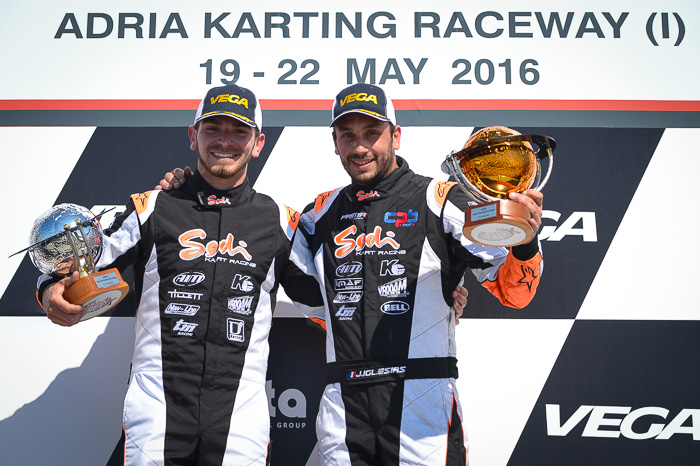 For those who thought that Sodi chassis performance of the early season wouldn’t last, the French brand has proven them spectacularly wrong by taking the 2nd and 3rd positions in the final standings of the 2016 WSK Super Master Series in KZ with Anthony Abbasse and Jérémy Iglesias.

WSK 2016 Objective: consistency and the championship

The competitiveness of their equipment, the work done and the fitness level of the drivers achieved the main goal that was set at the start, namely to regularly be at the forefront and get a good result at the end of championship. Mission accomplished, as Sodi put three drivers in the top seven, and two on the podium; Anthony Abbasse the vice-champion and Jérémy Iglesias in 3rd position.

The WSK: the benchmark championship in the karting world

The 2016 WSK Super Master Series took place over four events on Italian soil with the presence of the cream of the KZ category. After a double in the opening race at Castelletto, 1st for Anthony Abbasse, 2nd for Bas Lammers, as well as 4th position with the fastest lap in the race for Jérémy Iglesias, the Sodi drivers kept their consistency  for all three following rounds of the championship, keeping in sight the end result.

In this conclusion of the WSK Super Master in the Veneto, Bas Lammers multiplied strokes of brilliance, pulling out all the stops with the fastest time in his two heats and in the Prefinal. This exceptional performance allowed him to make impressive rises and reach 5th place in the Final.

The CPB Sport driver Jeremy Iglesias progressed inexorably in the heats before taking 3rd places in the finals. His rise allowed him to finish 3rd in the championship.

With the competition intensifying race after race, Sodi is, without doubt, a major player in the premier class of karting this season, on any terrain and under the most diverse weather conditions. The excellent work of the team in the field and the ongoing developments carried out by the factory allow the Sodi chassis to compete for victory in each event. Effective collaboration with its engine partner TM Racing is also to be credited for this strong overall result, while the contribution of CPB Sport through the excellent results of Jérémy Iglesias vindicate Sodi’s strategy at the highest level of international competition.

After a very positive start to the season, two major events remain, not to be missed. These will first be the conclusion of the European Championship at Genk in late July with the aim of winning the title, and the World Championship at Kristianstad in early September where everyone at Sodi will aim to win the supreme title.