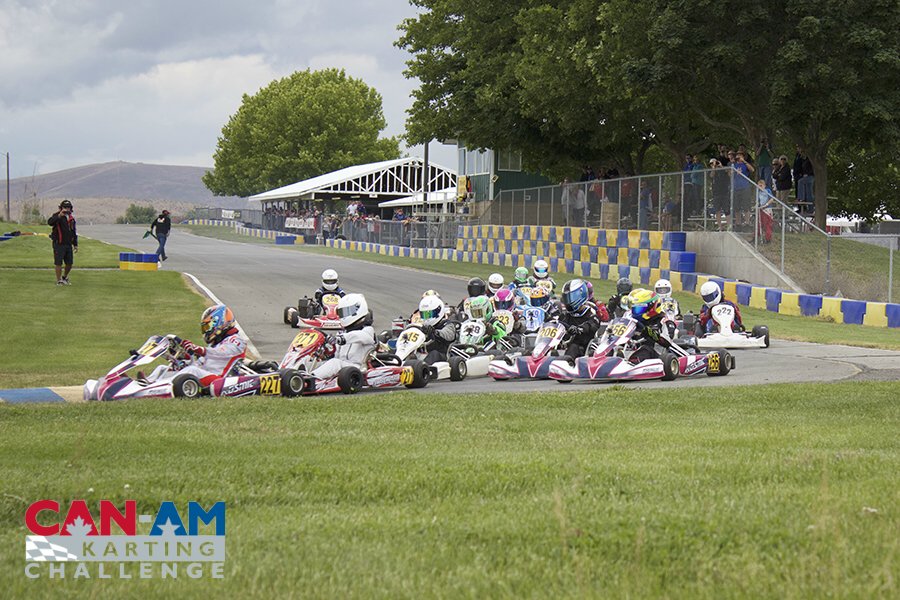 The Can-Am Karting Challenge opened up its 2016, welcoming just over 80 racers ranging from young and old, new to veteran, taking on the Horn Rapids Kart Track in Richland, Washington. Site of the Tri-Cities Kart Club program, the Can-Am racers called it home over the May 20-22 weekend. The 2016 Can-Am program is filled with Rotax Max Challenge and Superkarts! USA regional categories, as well as many options for club racers with the three age groups in the Briggs & Stratton 206 program, and the new TaG Senior and Open Shifter categories. This year is about welcoming everyone to come and enjoy the ‘Can-Am’ experience first-hand. Promoter Mike Rolison wanted to make sure all the families and racers were thanked for coming to the opening event and a special thank you to the Can-Am ‘A Team’ staff and all of the sponsors, as the series would not be possible without them. 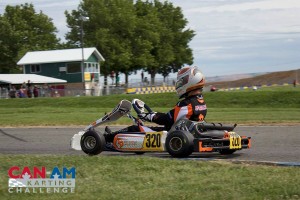 Many took the opportunity to begin their chase for the Can-Am championships at the end of the year, featuring a number of multiple winners over the weekend. It was a picture perfect weekend for Coltin McCaughan in the Senior Max division. The Canadian driver led every lap, every session to score maximum points to begin the chase to the series championship and the 2016 Rotax Grand Finals ticket for the driver who finishes the year on top. Saturday’s triumph was completed with a two-second victory over Walker Hess and Adam Smalley. Derek Wang and fellow Canadian Kellen Ritter completed the top-five. McCaughan nearly lost the perfect weekend in Sunday qualifying as Wang came 47 thousandths short of stealing fast time in the session. McCaughan remained perfect throughout the day, pulling out a four-second margin in the main event for his second victory on the weekend. Ritter beat Wang for the second position as Bradley Dezall and Ryan Martin advanced up to fourth and fifth.

Mason Buck and Matthew Taskinen split the wins in the 20-driver field of Junior Max. Buck emerged as the driver to beat in the opening round on Saturday, coming from third on the grid after qualifying to win the Prefinal. Mason led all 20 laps of the main event, pulling away to a 4.3-second advantage for his first victory in the series. Ellie Musgrave won the battle for runner-up ahead of Carter Herrera, Austin Torgerson and Matthew Morgan. Taskinen would not falter as he did Saturday after earning fast time in qualifying, dominating Sunday’s round of racing. Taskinen cleared the field by two tenths of a second in the morning timed session before leading wire-to-wire in the Prefinal and Final for the victory. Edward Portz drove to second over Buck with Herrera and Morgan just missing out on the podium. 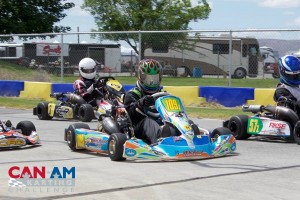 The Masters Max presented by Rolison Performance Group field were all chasing Billy Cleavelin on the weekend. A racer with decades of experience, Cleavelin swept the weekend to earn maximum points. Cleavelin drove to a five-second advantage on Saturday, beating Michael Groff and Jerry Pitts. Sunday, the margin of victory grew to nearly seven seconds with Groff and Pitts once again finishing behind Cleavelin. A TaG Senior category, presented by Smak Plastics, was added for 2016, open to all brands and types of engines to welcome the local drivers across the region. Andrew Wilson and Kevin Janders each took home a victory. Wilson swept the action on Saturday, beating out Chris Eagles and Amanda Smalley. Janders joined Sunday, and emerged the victory just beating out Wilson at the line with Eagles completing the podium. An Open Shifter class was also provided for the weekend with Andrew Wilson adding two more wins on the weekend.

Kyle Wick was the big winner overall, taking home a total of four victories. Wick swept the S2 Semi-Pro Stock Moto category, a Superkarts! USA regional category. Kyle earned the full amount of points toward the championship chase, beating out Brennan Peters and Cole Franchini by five seconds on Saturday, and extending it to a 15-second margin of victory on Sunday with the same two drivers joining him on the podium. 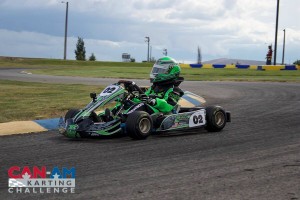 Wick also came away with the wins in the popular LO206 Senior division, presented by Briggs & Stratton. Derek Wang battled Wick for the top spot throughout Saturday, with qualifying going to Kyle and the Prefinal to DW. Spencer Kunz joined the party, fighting Derek for the top spot while Wick charged from starting the main event outside the top-five. Wick was able to lead at the checkered flag, beating out Kunz and Wang for the victory. Brady Egger was fourth with Christopher Mann in fifth. Kunz was the driver to beat on Sunday, topping the charts in qualifying and beating the field to the checkered in the Prefinal. Once again, Wick came charging through the field to steal the lead from Kunz in the final stages of the race, notching a fourth victory on the weekend. Wang, Egger and Mann repeated as top-five finishers.
Ashton Torgerson nearly made it four wins on the weekend as he pulled double duty in the Micro Max presented by Go Kart Hero and Mini Max presented by Monster X. Torgerson was untouchable in the Micro division, going on to sweep the weekend with victories of 20 and 29 seconds. Shawn Kozma and Isabella Jaime joined him on the podium Saturday and Sunday in the same positions both days. Ashton scored maximum points in Round One for Mini, sweeping the day and capping it off with a half-second advantage over Jonathan Portz and Josh Pierson. Sunday was much of the same, leading qualifying and winning the Prefinal. Ryan Dezall gave him a run, leading a majority of the race. Torgerson regained the top spot on lap 11, and two laps later he retired due to a broken chain. Dezall took back the lead, but only for a lap as Portz continued charging forward after starting seventh and assumed the top spot with two laps remaining. Jonathan drove away to the victory, his first in the series. Pierson crossed the line in second but was handed a two position penalty for contact, advancing Dezall to second and Jason Leung to third. 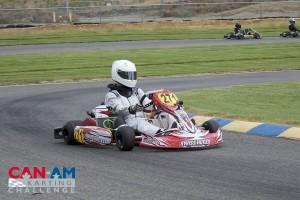 Mason Buck landed the victory in the opening round of the Junior Max category (Photo: Dalton Egger – CanAmKartingChallenge.com)

Austin Torgerson and Carsen Kunz became first-time winners in the LO206 Junior division presented by Briggs & Stratton. Torgerson won a close battle in the Round One Final, beating out top qualifier and Prefinal winner Mason Buck and Kunz. On Sunday, Buck was the top qualifier with Torgerson winning in the Prefinal. Kunz stepped up for the big show, driving away to a 1.7-second advantage in the Final for the victory over Torgerson and Buck. The LO206 Masters presented by Briggs & Stratton were split by defending series champ Bryan Green and Tim Doyon. Much of the weekend was in the favor of Doyon, who came out as the top qualifier and Prefinal winner. Tim was shuffled to the tail of the entire LO206 field, allowing Green to score the first round victory. Doyon finished second with Joe Young in third. Sunday was all Doyon as he swept Round Two, finishing it with a six-second victory in the Final over Green and Young.

Next on the calendar for the Can-Am Karting Challenge is a trip north of the border to British Columbia, Canada and the Greg Moore Raceway in Chilliwack on July 8-10. More information regarding the 2016 season can be found at www.canamkartingchallenge.com or on their Facebook page, including videos and photos from the Tri-Cities Kart Club weekend.