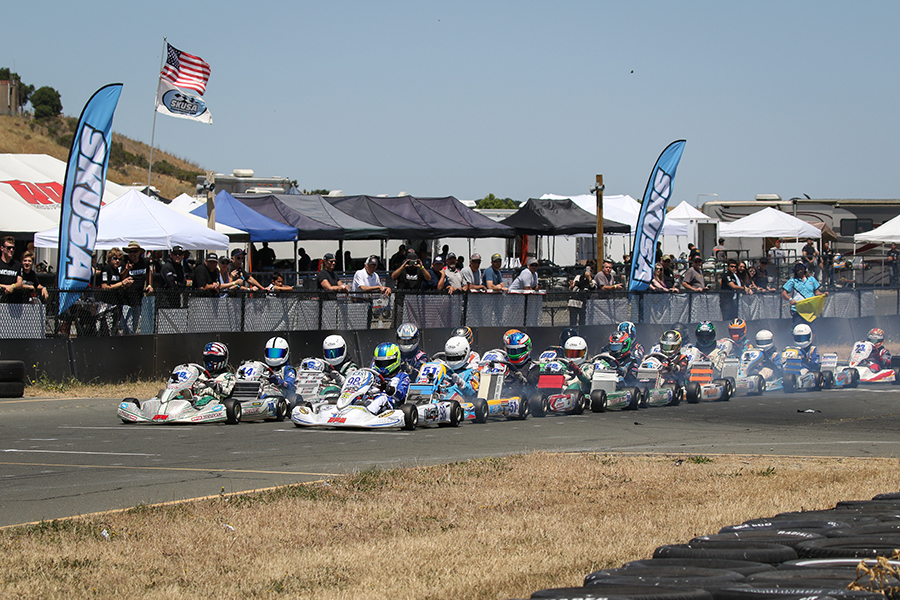 The second half of the California ProKart Challenge season begins June 3-4 at the Simraceway Performance Karting Center in Sonoma (Photo: DromoPhotos.com)

The California ProKart Challenge returns to the track on June 3-4 after taking the month of May off for the Superkarts! USA Pro Tour SpringNationals. Competitors are set on traveling to Northern California to the Simraceway Performance Karting Center in Sonoma for the fourth round of the 2016 season. The incredible ‘National’ circuit in the reverse direction – same as the inaugural Pro Tour event in 2010 – will host what may be the largest event of the series this year with a large contingent of SKUSA racers in the area and the growing numbers that have joined the program already in the first half of the championship.

Gearing up for the event is KC Morrison, Simraceway Technical Director. “I would like to thank the Kutscher family, Superkarts! USA, and all the teams who make the trip year after year to come race at the Simraceway Performance Karting Center. We here at Simraceway cannot wait to see all the teams and drivers in action and are looking forward to yet another great event up here in Sonoma!”

Three different drivers have won in the first three rounds of the 2Wild Karting S1 Pro Stock Moto championship chase. Billy Musgrave was the first to reach the top of the podium in 2016, and remains the championship leader through the first half of the season. Two runner-up finishes put him 50 points ahead of Round Two winner Jimmy McNeil, another driver with three podium finishes. Jarred Campbell landed the victory in Monterey, entering Sonoma as the most recent winner and looking to close up in the championship chase with another victory. Musgrave has also taken over the lead in the Phil Giebler Racing X30 Senior standings. Pulling double duty in 2016, Musgrave has two runner-up finishes to put him at the front of the championship chase. Veteran Matt Johnson and Phillippe Denes are locked in the second position, 37 points back of Musgrave. Johnson is coming off of a victory in Monterey, while Denes has two straight third-place finishes.

Just five points separate Alan Michel and Robert Marks in the Nash Motorsportz S4 Master Stock Moto standings. Michel has yet to visit the top step of the podium in the series, placing third and second in the first two rounds. The Arizona driver won his first Pro Tour race at the SpringNationals, and is looking for his first at the California PKC. Marks won at Round Three, looking to move into the top position in the standings after Sonoma. John Crow has a stronghold in the Vemme Kart/Extreme Karting X30 Master class with two straight wins. Tim Meyer is 133 points back thanks to two runner-up finishes in the first three races. Ken Schilling has a stranglehold on the Mike Manning Karting S4 Super Master Stock Moto class, thanks to his two weekend sweeps and a runner-up last month. The gap between him and Darrell Tunnell is 140 points.

Hunter Pickett extended his point lead in the Leading Edge Motorsport S2 Semi-Pro Stock Moto division thanks to a victory at Round Three. His first series win puts him 110 points out front of the title chase ahead of Pro Tour SpringNationals winner and S2 rookie Hunter Kelly – while Robert Heck Jr. is a close third thanks to his consistency over the first half of the season. Four drivers currently sit within 90 points of each other in the Outsource Utility Contractor S3 Novice Stock Moto class. Garrett McKelvie leads the standings with a 1-2 finish in the opening rounds. Round Two winner Royal McKee sits second with Adrian Yong in third. Round Three victor Julian van der Steur rounds out the top four after his sweep in Monterey.

It’s a close fight in the Ryan Perry Motorsport X30 Junior category as well, featuring four drivers within 100 points. Oliver Calvo won in Monterey, helping him to surpass previous point leader Tomas Mejia. Round One victor Dante Yu and Arizona pilot Jagger Jones are within reach to battle for the top spot in the championship. Dean Heldt remains the driver to beat in the RPG S5 Junior Stock Moto division, ripping off three straight victories to hold control of the title chase over Ricco Shlaimoun and Kent Hatada.

Defending Professional Kart Support Mini Swift champion Anthony Willis holds the top spot in the standings. The Round Two winner enjoys a 117-point advantage heading into the Sonoma weekend over Buttonwillow victor Dominic Gorden. Jace Jones and Jace Denmark-Gessel are looking to break into the battle heading into the second half of the season. Kai Sorensen remains the driver to beat in the Top Kart USA Micro Swift class. Two straight wins put him 175 points out front of Cooper Hunt and Round One winner Kailey Meris.

Race pre-entry remains open until Tuesday, May 31 at the online registration section of the Superkarts! USA website – offering the discounted price of $325 for entry and stamped race tires. Move-in begins on Thursday, June 2 at 7am, with the track hosting a half-day of practice beginning at noon. On Friday, the California PKC registration desk opens at 7:00am, with the official practice day beginning on track at 9:00am and running until 5:00pm. Pit spots cannot be reserved prior to this event; however, class and event sponsors will receive priority parking, with the rest of the paddock set up on a first-come, first-served basis. A variety of hotels are in the area, with two offering special pricing for California PKC competitors. Additional event and track information is available at the California PKC Event Page.

Superkarts! USA would like to remind racers that no motors may be run at this track before 8am or after 6pm. Stock Honda engines MUST have an airbox. Spec fuel and oil is not provided by PKC, so please plan accordingly to pre-order from your local kart shop or by bringing a sufficient supply of both for the weekend. This is the last event for drivers who competed at the first three rounds of the series to complete their path to qualifying for the Priority Pre-Entry Program for the SKUSA SuperNationals XX by entering and competing at the first four California PKC races in 2016. Don’t forget to stick around after all the on-track activities have completed for the post-podium raffle drawings. Superkarts! USA handed out more than $3,000 in prizes at the first three events.