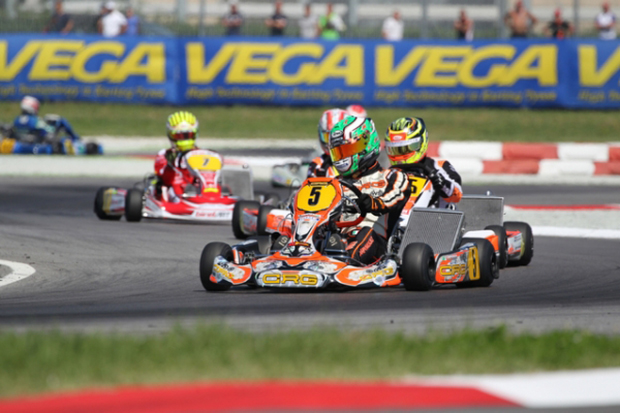 Camponeschi ended fourth in the KZ Championship in the closing round of WSK Super Master Series in Adria. Pollini second in KZ2 by one point. Hiltbrand slipped down to third in OK. Hauger new star of OKJ, Gomez great in Mini.

The WSK Super Master Series named its winners of the four categories KZ, KZ2, OK, OK Junior and 60 Mini at the Adria International Raceway. The closing round had a lot of twists for CRG drivers that have been fighting for the victory in at least three categories. A podium arrived in the end for Pedro Hiltbrand in OK and for Giacomo Pollini in KZ2.

Flavio Camponeschi has been representing CRG colors in the most powerful category, KZ.  The Italian driver on CRG-Parilla run a good weekend. Always among the main protagonists, he claimed a great second place in his Prefinal. After a good start from P3 in the Final, he lost some ground due to grip problems and could not find the right gap to “emerge” from the leading group. Camponeschi had to settle for P8 closing in the slipstream of his rivals. The Final and the Championship were won by Ardigò, while Camponeschi ended fourth in the championship.

Giacomo Pollini on CRG-Tm was the favourite to the title at the eve. He had been leading the classification since the beginning, but team Renda Motorsport’s driver had a double hiccup in Adria. He lost the championship to race winner Leonardo Lorandi by one point only. Pollini won his Prefinal, but in the Final he was handed a 10s penalty due to the mis-positioning of his front fairing following a unintentional contact with a rival. Meanwhile, a contact (with kart lifted up in the air) involving Lorandi and the Swedish Benjamin Tornqvist of CRG Holland did not make Lorandi’s nose cone drop. That put the word end to the race of CRG Holland’s driver though, who had been third in his Prefinal. Pollini eventually had to concede his classification lead to Lorandi by one point.

In KZ2, the Portuguese Yohan Sousa was seventh at the debut on Zanardi-Parilla, Fabrizio Rosati was ninth on CRG-Maxter and ended 12th in the classification. Luigi Musio of Team Palmisano was fourth of KZ2 in the Final and in the championship, was the best of CRG private drivers.  The Japanese Fuma Horio had some blistering problems ending his Prefinal in 18th  place and could not qualify for the Final. Fabian Federer had to retire in KZ on CRG-Modena.

HILTBRAND SLIPPING DOWN TO THIRD IN OK

The Spanish driver of CRG in OK Pedro Hiltbrand on CRG-Parilla ended his weekend quite unexpectedly. He was in fact involved in an incident in Prefinal, after being among the main title contenders also in this occasion. Following the incident in the first lap of the Prefinal, Hiltbrand recovered well in the Final taking a good P14, but had to concede the classification lead that he had been previously held since the first of the four rounds of the WSK Super Master Series. In the end he had to settle for the third place in the final classification, closing behind Travisanutto and Basz. After the Prefinal, Tom Joyner on Zanardi-Parllla saw his title chances boosted up as he was second in the championship at 155 points, only 7 short of Hiltbrand that was still leading at that point despite his troubles. In the Final, an engine failure prevented Joyner from fighting for the championship until the end and relegated him to the final fifth place in the standings.

Felice Tiene had another good run at the end of a “steep” weekend, as he closed his effort with the fifth place in the Final. Alike, the Finn Paavo Tonteri pulled a good seventh place after shining in qualifying (P4) and in the heats. Tiene ended the championship in P12, while Tonteri was 15th.

Dennis Hauger has been protagonist of an exciting run in OK Junior. The young Norwegian of CRG is proving to be quicker and quicker in his debut year in the category. After the pole position, two victories in the heats and two other unlucky heats, Hauger put in a great recovery in the Prefinal claiming P2. He led the Final for the first few laps before ending second in Collet’s slipstream. Hauger ended the championship in seventh place, but showcased a good level of competitiveness on his CRG-Parilla.

A good race was also run by the other two CRG drivers of OK Junior: Teddy Wilson was eighth in the Final, while Gianluca Petecof was 24th after a good recovery from qualifying and heats. Among private drivers, Team Morsicani’s Andrea Rosso qualified for the Final and ended 27th.

EXCELLENT RACE FOR THE GOMEZ IN MINI

A lot of drivers of private teams have been shining for the whole weekend on CRG in Mini. The most competitive was in the end the Spanish Jose Antonio Gomez, who was at the debut with Team Gamoto. He claimed second in the Final after a good duel with race and championship winner Paparo. The Malaysian Adam Putera and Alfio Andrea Spina, also of Team Gamoto, ended within the top ten, respectively in eighth and ninth place. Federico Cecchi of Team Morsicani was 11th.  Regarding the other title contenders, Evann Mallet was 16th after the second place in his Prefinal and ended the Championship in fourth place.

Dino Chiesa, Team Principal CRG: “We are really happy on Dennis Hauger’s performance in OK Junior: he is getting quicker and quicker. Dennis has certainly been penalized in one heat in an incident caused by a driver ahead of him – who was not even penalized by the way. He also made a mistake as was handed a 10s penalty for overtaking under yellow flags. He started the Prefinal from the back and lost some positions at the start, but managed to recoup very well ending second. He also ended the Final in P2, but this result does not quite fit as we suffered from having to use two new tyres in the Prefinal, while Collet had a complete set of fresh tyres on in the Final. Dennis will certainly get the win, as he has what it takes. The material is also very good, as showcased by the eighth place secured by Wilson, and by Petecof’s performance that his getting up to the rhythm of European races. The OK weekend has been bad for Pedro Hiltbrand. He did some mistakes and recovered well in the Final, but starting from the back it was difficult to obtain more. I am sorry for Tom Joyner, he had an engine failure early on in the Final when the success was at his reach. We regret not achieving what we could have. Felice Tiene has also been a bit unlucky so far and the contact with Nielsen in Sarno had an impact on his tally. Paavo Tonteri is showing very good things in OK, he just misses some racing experience. The KZ Championship was already closed, we decided to field Camponeschi as we needed to do some tests. Overall, we run a good Final. Our KZ2 drivers still need to clock up some mileage and to improve a bit.”