WSK Super Master Series – A Celebration of the Protagonists of Motorsport 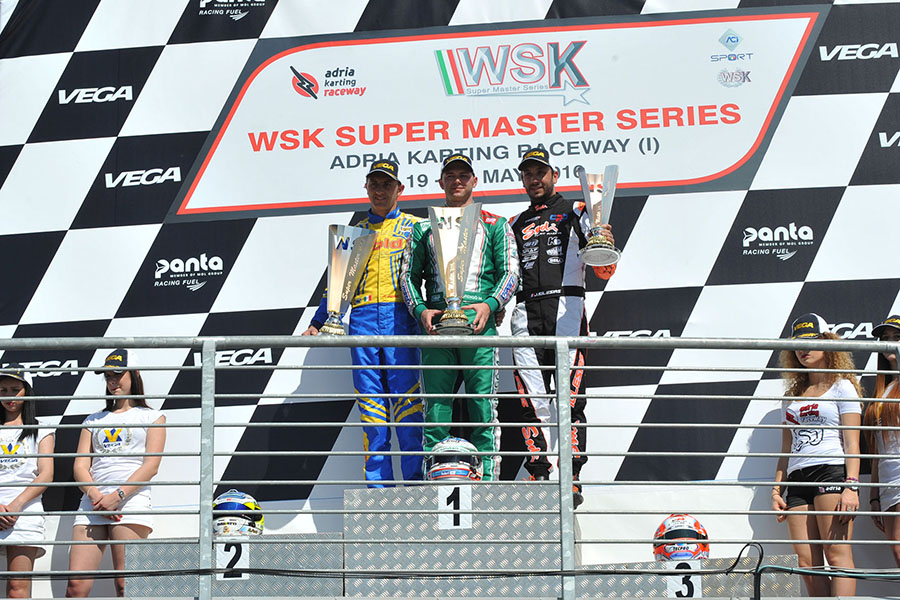 The final of the WSK Super Master Series was actually a great celebration of Motorsport: the event, hosted by the circuit of Adria (Rovigo, Italy), was definitely a big day for international karting. The hunt for the victory of the competition – organised by WSK Promotion – pushed the 200 participants to exploit their talent to the utmost. Today’s races were so breath-taking that also stars of motorsport such as the former World Champion Mick Doohan and the GP2 driver Antonio Giovinazzi, who attended the event, got totally involved in the show on track and took part in the prize-giving ceremony.

Ardigò keeps at bay his opponents and wins in KZ

Marco Ardigò (Tony Kart-Vortex-Vega) never lost the grip on the race: he grabbed the pole after qualifying, won in the heats and in the Pre-final A. In the Final, where he was the pole-sitter, the Italian knew that he had to deal with top rivals such as his fellow countryman Davide Forè (Righetti-Ridolfi-TM), who started next to him. Forè, the winner of the Pre-final B, kept always close to Ardigò, but he did not manage to do better than second. Good performance also for the French Jeremy Iglesias, third after passing, during the first laps, the Czech Patrik Hajek. Thanks to this victory, Ardigò won also the Series.

Lorandi sits on the throne of the KZ2

The victory in KZ2, after a great duel against his fellow countryman Alessio Piccini (Tony Kart-Vortex-Vega), boosted the Italian Lorando Lorandi to the top of the KZ2 standings. On the other hand, Giacomo Pollini (CRG-TM), who arrived in Adria as the leader of the category, lost the fifth place he needed to keep the head of the standings. He lost the position due to a penalty for the misplacement of his front fairing. Lorandi, who won ahead of the Italian Francesco Celenta (Formula K-TM) and of Piccini, took over the leaderhip of the category, beating Pollini into second position by only one point.

Karol Basz (Kosmic-Vortex-Vega) swept the board in OK: he won the Pre-final and the Final. He aimed at closing the gap with the Spanish Pedro Hiltbrand (CRG-Parilla), who was well ahead of him, and the Polish almost hit the target. Basz won ahead of the strong Spanish Marta Garcia (EvoKart-Parilla) and of a great Lorenzo Travisanutto (Tony Kart-Vortex). Travisanutto, thanks to his result, managed to overtake Hiltbrand (only 14th today) and to win the Series.

Great race between the Norwegian Dennis Hauger (CRG-Parilla-Vega) and the Brazilian Caio Collet (BitrelArt-Parilla): eventually the latter prevailed and deservedly won the OKJ Final. Behind the two frontrunners, the duel for the victory of the Series was between the Danish Noah Watt (Tony Kart-Vortex) and the Moroccan Sami Taoufik (FA Kart-Vortex). The latter managed to finish third and to win the Series.

Paparo wins the Final and the 60 Mini

It was on the last laps of the 60 Mini Final that the Italian Michael Paparo (IP Karting-TM) overtook the Spanish Jose Gomez (CRG-TM). Another Italian, Luigi Coluccio (Tony Kart-Vortex) completed the podium scoring the third place. Thanks to the two victories in the Pre-final and in the Final, Paparo laid his hands on the category, overtaking his fellow countryman Gabriele Minì (Energy-TM).