Driver Smell Victory at the WSK in Adria 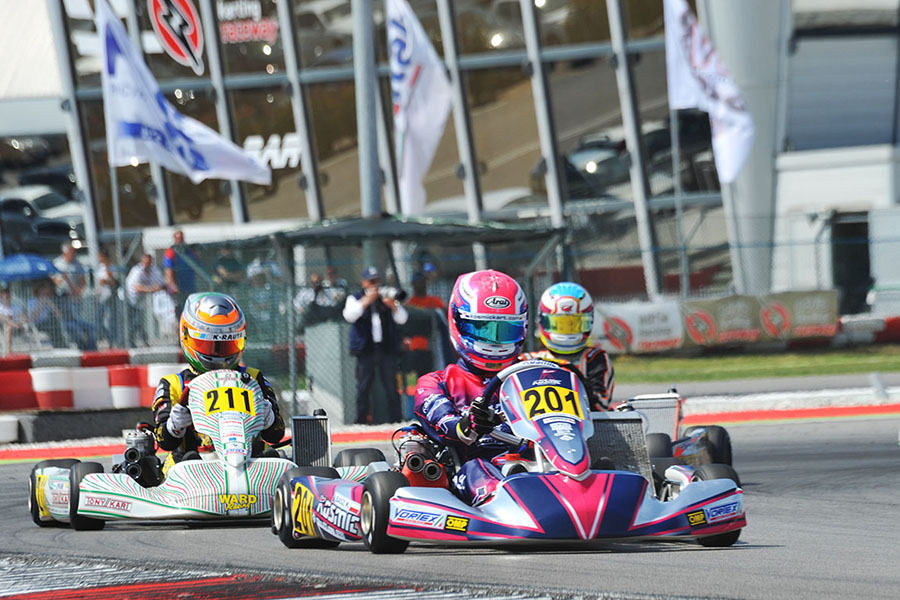 Heats, too, are bound to bring great changes to the standings of the WSK Super Master Series, which is taking place at the Adria Karting Raceway. The event is getting ready for the grand finale: tomorrow, in fact, we will know the names of the winners of the five categories admitted to the competition. In today’s races on the track near the north Italian town of Rovigo, the centre stage was taken by those drivers who managed to score the points they needed to gain positions in the standings: the drivers who arrived in Adria as underdogs are going to be tomorrow’s frontrunners. WSK’s video production is ready to provide a full coverage of the final day, streamed live tomorrow at 10.30 on the website wsk.it.

Basz bids for the OK victory

Karol Basz (Kosmic-Vortex-Vega) is absolutely eager to lay his hands on the title, despite the 118 points which separate him from the leader, Pedro Hiltbrand (CRG-Parilla). However, the Polish driver is still in the game and aims at winning both tomorrow’s races: he will be the pole-sitter of the Pre-final. Hiltbrand, who placed only tenth, will have to keep at bay also the Dutch Martijn Van Leeuwen (BirelArt-Parilla), second after the heats, and the Italian Lorenzo Travisanutto (Tony Kart-Vortex), third. So, the starting grid of the Pre-final will have Basz and Van Leeuwen in in the front row, with Travisanutto and the Finnish Paavo Tonteri (CRG-Parilla) in second. The American Logan Sargeant (FA Kart-Vortex) and Clement Novalak (Tony Kart-Vortex), 2nd and 3rd in the overall standings, will not fill good slots on the grid: a further evidence of how uncertain the race is going to be.

Ardigò and Forè, two world Champions for the KZ Pre-finals

Marco Ardigò (Tony Kart-Vortex-Vega), the KZ leader, and Davide Forè (Righetti Ridolfi-TM) were the top drivers of the heats and they will be the pole sitters of tomorrow’s Pre-finals A and B. The two Italian drivers, former World Champions, will have the Czech Patrik Hajek (Kosmic-Vortex) and the English Jordon Lennox-Lamb (BirelArt-Parilla) by their side, while the French Anthony Abbasse (Sodi-TM), second in the general standings, is a bit behind. Best performance in KZ2 for the Swedish Ben Tornqvist (CRG-TM), followed by the Italian Leonardo Lorandi (Tony Kart-Vortex). The KZ2 leader, Giacomo Pollini (CRG-TM), was not so performing and will start from the centre of the grid.

Collet and De Pauw are the frontrunners in the OK Junior

Three victories in the heats for the Brazilian Caio Collet (BirelArt-Parilla-Vega): he is the driver to beat in the OK Junior, even though his team-mate, the Belgian Ulysse De Pauw, managed to score three victories too. They will be tomorrow’s pole sitters in the two Pre-finals. The Spanish David Vidales (Tony Kart-Vortex) will start next to Collet and the Swedish Rasmus Lindh (Ricciardo-Parilla) will fill the second slot next to De Pauw. On the other hand, the current category leader, the Moroccan Sami Taoufik (FA Kart-Vortex), will start from the 6. row of the Pre-final B.

The Spanish Moar and Gomez lead in 60 Mini

The Spanish Urbelts Moar (EvoKart-TM) and Jose Gomez (CRG-TM) will start from the pole in the Pre-finals A and B of the 60 Mini. The Italian Michael Paparo (IP Karting-TM) and the Estonian Paul Aron (Tony Kart-TM) will fill the front row. Only sixth row in the Pre-final A for the current leader of the category, Gabriele Minì (Energy-TM-Vega).