In just over 100 days, karters from across North America will converge on the Quad Cities area for the 22nd running of the Rock Island Grand Prix. Dubbed as the largest street race in the world, Rock Island, Illinois city streets are converted overnight into a race track as competitors tackle the 6/10-mile course along the Mississippi River. This year’s event – scheduled for is expected to grow in numbers following format changes that included more racing, and more drama.

After announcing significant changes in the race program last year, the Rock Island Grand Prix has also modernized its online registration program for 2016. This year’s race will continue the format introduced last year which features a pea pick and heat race for qualifying and the opportunity to run two races on the same set of tires in Briggs and Yamaha Heavy classes. 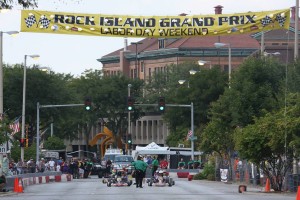 This year’s Rock Island Grand Prix is primed to be the biggest in recent years
(Photo: Joe Brittin)

The only change in the class lineup for 2015 is the dropping of the 80cc shifter program and addition of a Margay Ignite Shootout Junior class. Also, the vintage kart program has become more focused by specifying a Vintage Sportsman Class, Vintage Mac class and Vintage Open class. Sidewinder and rear engine karts are allowed in all Vintage classes.

The biggest change, which racers have been asking for, is modernization of the registration process through a partnership with Raceday. Racers will be able to access registration from their desktop, tablet or smart phone. Once they complete a very brief procedure to establish an account, they will be able to enter the race simply using a credit or debit card. Kart number will be confirmed when you register and credit cards will be processed the same day. A small processing fee will be charged to the racer. Racers not wishing to register online can still print off a registration form from the Rock Island Grand Prix website and mail it in with a check.

Raceday’s mission is to make kart competition a better experience for fans, drivers, promoters and sponsors alike. The Raceday software available at getraceday.com brings cutting edge technology to kart racing by being the simplest way to set up and run a karting event, series, or track.

Raceday becomes part of the track’s website. It’s a single, easy-to-use tool for registration, memberships, race setup and management, driver profiles, race results and a whole lot more. There is no downloading, no installation, no maintenance, no hassle. Raceday has been providing drivers of kart, snowmobile, car, and off-road vehicles a faster way to get registered with an event, manage their public profiles and keep track of their results since 2011.

“We are excited about the upgrades that our partnership with Raceday will bring to our event. It will not only streamline registration and credit card processing but also the interface with mylaps and our ability to immediately post results to our website,” said Roger Ruthhart, president of the Rock Island Grand Prix. “We would like to thank our friends at National Karting Alliance for helping to connect us with Raceday.”

Racers can go to rockislandgrandprix.com, click on the link to the Competitor’s page and then the button to Online Registration.

Or they can go directly to rigp.myracedayapp.com and create a personal account from which they can then enter the event. 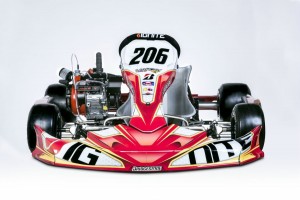 Margay Ignite will expand to Senior and Junior divisions

Briggs & Stratton Racing is again providing a $100 discount to any racer who enters a second Briggs & Stratton LO206 class.  Racers entering a second discounted class should click on the $25 entry option for that class. Discounted entries are limited to one per driver.

Feedback on the registration process should be sent to grandprix@qconline.com. Updated Supplemental Rules will be posted to the website shortly.

The Rock Island Grand Prix is hosted by the Downtown Rock Island Arts and Entertainment District which features retail shops, excellent restaurants, live entertainment, dinner theater, art galleries and comedy clubs all within walking distance of the host hotel. Jumer’s Casino & Hotel is just a short drive away. Rock Island is located on the Mississippi River three hours west of Chicago in an area known as the Quad-Cities which straddles the river and the Illinois/Iowa border. It is at the intersection of Interstate highways 74, 88 and 80 and is served by Quad City International Airport in Moline, Ill. (www.ridistrict.com)