Surge of Entries at Round Four of Los Angeles Karting Championship

Hays, Schartau, Inzunza and Cotham among the big winners at CalSpeed 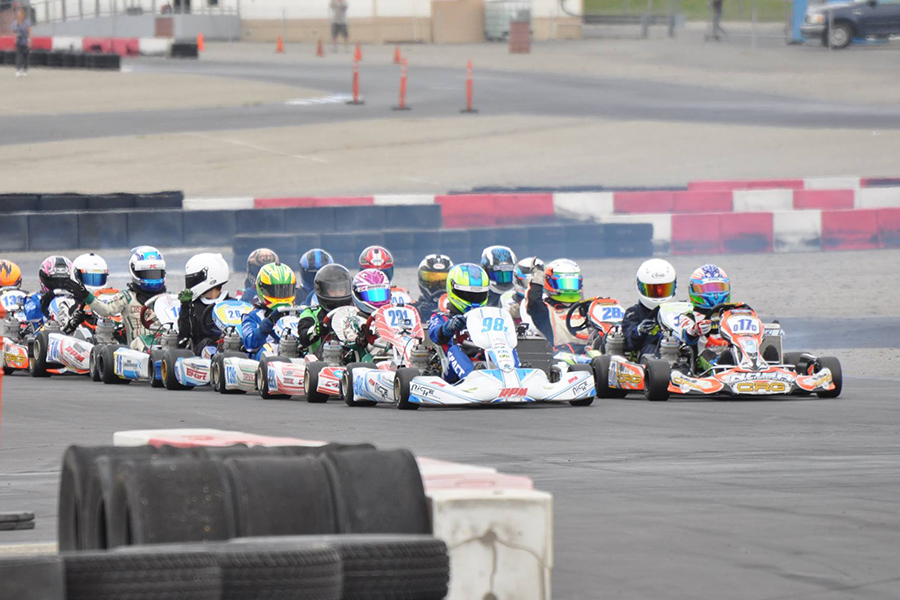 The fourth round of the Los Angeles Karting Championship took place May 15 at the CalSpeed Karting Facility. A surge of entries boasted the total number above the 180-mark, all converging on the Fontana, California facility to dry and comfortable racing weather. A handful of drivers used the event to establish themselves as a championship contender, along with others adding to their win column for the 2016 season.

Numbers increased once again in the 2 Wild Karting TaG Senior division as it reached the 31 driver mark, resetting the best total of the season. Everyone was chasing Nicky Hays, as the Senior rookie earned his first win of the season in an event sweep, promoting himself as a championship contender. Hays beat out point leader Billy Musgrave for the top position in qualifying before leading all 10 laps of the Prefinal. Musgrave took over the lead on the opening lap of the main event, with Hays trying to work around for position. Through the 18 laps, Musgrave kept Hays behind him and reached the checkered flag first, only to cross the scales just under the minimum weight. That promoted Hays to the top step of the podium for the victory, putting Carlee Taylor in the second position and Ethan Barrett third. Christian Brooks and Colby DuBato competed the top-five. 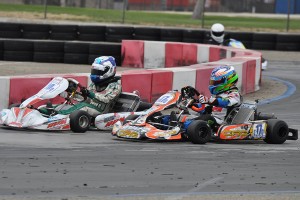 Jagger Jones appeared to have a sweep in hand after showing the way through much of the day in the Ryan Perry Motorsport X30 Junior category. Jones set fast time in qualifying and won the Prefinal with pressure from Ryan Schartau and Zoey Edenholm. Jones led the first eight laps of the Final until getting shuffled back to sixth. Edenholm took the point and led until Schartau stole the position with two laps remaining. Schartau held on in the final circuits to score his second victory of the season and take over as the championship leader. Jesse Gutierrez edged out Edenholm for the second position, with Joseph Daniele and Calder McWhinney placing fourth and fifth.

Daniel Inzunza became the only two-time winner in the P1 Engines Mini Swift division this season, and the new championship leader. Inzunza found himself looking up after qualifying, sitting sixth behind fast driver Cole Keith Cotham. Following a wild Prefinal, Cole Morgan emerged as the top driver over Rylee Martinez and Cotham as Inzunza slipped back to ninth. Morgan continued to show the way in the Final with Inzunza slowing working his way forward. By the white flag, Inzunza was into the second position and putting the pressure on in the final circuit. Inzunza made the move and led the one and only lap that matters, the checkered flag lap. Jalen Mack and Dominic Gorden slipped past Morgan for a photo finish to steal the podium positions, as Martinez completed the top-five.

John Crow nearly jumped back on the winning streak the Mike Manning Karting TaG Master class. Crow set the pace in qualifying and led all 10 laps of the heat race. Former series champion Erik Jackson found speed for the Final, taking over the lead on lap eight. Crow settled into second until the final lap. With just a couple corners remaining, the two made contact with Crow coming out as the leader to cross the line first. Officials penalized Crow one position, awarding the win to Jackson. Nick De Graaf placed third over Diego Delosi and Tim Meyer. 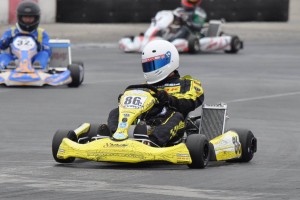 Erik Jackson was announced the winner in the TaG Master category (Photo: KartRacerMedia.com)

The Fleming Racing Engines Junior 1 Comer category welcomed its first two-time winner on the season with Cole Keith Cotham performing a sweep on the day. Cotham beat out the field in qualifying by a full three-tenths of a second, only to see the gap shrink to just fourth thousandths of a second thanks to Aden Dodge making it a photo finish to close the Prefinal. Dodge and Cooper Hicks each challenged for the victory in the main event. Both took a turn at the point with Dodge leading when the white flag was displayed. Cotham pulled the trigger and made it stick, scoring his second victory of the season to take over the championship lead. Dodge ended up second with Hicks in third. Cole Morgan and Dakota Tate rounded out the top-five. Sanner Racing Junior 1 Comer Pilot class was swept by Blake Nash, earning his third straight victory on the season. Gaven Perez and Alex Estes completed the podium.

Slavo Prikhodko scored his third win on the season, besting the 10-driver Phil Giebler Racing Open 125 Shifter class. Wily Axton opened up as the top driver following qualifying, only to see Tyler Coffman move up to the front to win the Prefinal. Prikhodko took the lead on the opening lap, never looking back to pull out to a 1.1-second advantage. Vivek Tandon advanced up to second with Coffman, Axton and Jesse Romer rounding out the top-five. In the same race group, Chris Curtis landed his third straight victory in the Professional Kart Support S4 Super Master Stock Moto class, featuring its highest driver total of eight on the year. Curtis drove to a near five-second gap over Phil Conte with top qualifier Ron Rossetti in third. 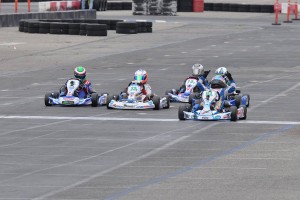 It was a photo finish in Mini Swift as Daniel Inzunza reached the checkered flag first (Photo: KartRacerMedia.com)

Royal McKee made it a third victory on the year in the Musgrave Racing Company S3 Novice Stock Moto class. McKee swept the day over the 10-driver field, winning the main event by 11 seconds. Garrett McKelvie drove to second with Prescott Campbell completing the podium. Mia Butts became the first two-time winner in the Mack Motorsports PRD Junior 2 class. Round three winner Ricco Shlaimoun set the pace in qualifying and reached the checkered flag first in the heat race. An opening lap incident dropped Shlaimoun to the tail of the field, giving Butts and Brendon Cramer a chance to fight for the victory. Cramer led first until Mia took over on lap 10, going on to the victory by seven tenths. Jordan Turner completed the podium with Pierce Sullivan in fourth and Shlaimoun recovering to fifth.

Frankie Mossman added another win to his total in the Empire Karts Micro Swift division. Mossman was the top qualifier in the nine-driver field, and found himself trailing two-time race winner Cooper Hicks at the end of the Prefinal. In the Final, Mossman went wire-to-wire for the victory. Hicks ran second until slipping back to seventh in the closing laps. That helped Tuesday Calderwood and Enzo Deligny to reach podium and put Mathias Coito and Austin Manka into fourth and fifth.

Logan Ainsworth made it three straight in the freem Honda Kid Kart category. Drake Cardey came out of qualifying as the fast driver by just 54 thousandths of a second. Ainsworth fought back to win the Prefinal, and led all 10 laps of the Final. Cardey finished just half a second behind with Logan Chambers in third. Brodey Vicars and John Antonino rounded out the top-five. 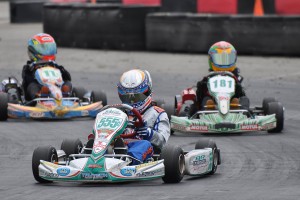 Cole Keith Cotham was among the drivers to sweep his category, doing so in Junior 1 Comer (Photo: KartRacerMedia.com)

The next event for the LAKC program is set for June 12 at the same CalSpeed facility. For more about the 2016 Los Angeles Karting Championship program, please visit LAKC.org and ‘Like’ them on Facebook.