After a Weekend of Mixed Fortune, Jewiss Hopeful to Recreate Adria Success 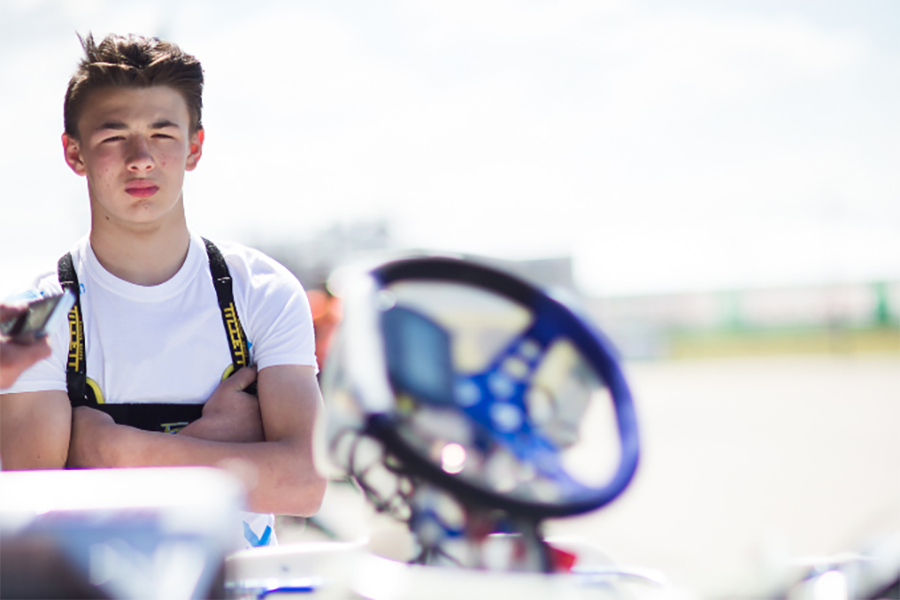 Kiern Jewiss took part in round one of the CIK-FIA European Junior Championship at the Zuera International Circuit in Zaragoza, Spain, at the weekend. In what proved to be some of the most exciting racing of the series so far, Jewiss once again showcased his amazing ability to produce great results in adverse conditions.

Qualifying was troublesome as the wrong chassis was chosen, which resulted in the 13 year old coming in P44. This led to unfavourable positions on the starting grid. At the start of heat one he was in P10 from P18, after only one lap. Defending hard due to lack of power, he finished the race P11. In heat two he managed to make it to P8 before his chain snapped, which brought an untimely end to the race. Jewiss managed to pull himself up to P10 in the first two laps of heat three, but had to defend hard to hold position. In heat four he started P18 and fought his way to P9 within the first two corners, but was unfortunately hit from behind. Another kart then drove over him, leaving him with a bent exhaust, axle, bumper and radiator. Not giving up despite the odds being stacked against him, Jewiss fought harder than ever, taking himself from P24 to P15 at the end of the race.

The pre-final saw Kiern starting P18 again. He drove astoundingly well considering the power issues he had and the fact that he was on the fastest circuit on the calendar. He managed to achieve P6, even setting the fastest lap of the race along the way. He started P12 for the main final. Despite all of the problems of the day, he managed to make P11, delighting viewers with some amazing overtaking which left people on the edge of their seats.

After a number of issues throughout the series, Kiern felt it the right time to look to the future: “It’s been a steep learning curve with the team, I appreciate what they tried to do for me, but I feel the chemistry wasn’t right. I’d like to thank them for their efforts especially Mansel (my mechanic) and Rickard (the team Manager). I won’t forget that they helped me achieve my first big win in Europe and I wish them the best of luck for the season. Although my results haven’t been the same as previous years, I feel I have learnt more about myself in these past months than ever before and that experience is priceless”

Jewiss lies P11 in the European Championship. After much deliberation the decision has been made to part ways with Ricciardo Kart and this weekend he will be joining British squad Forza Racing for the final round of the race in the WSK Super Master Series.

Speaking of the move, Kiern says: “I have seen the package Forza have to offer and I feel it’s a great opportunity to race in Adria again, obviously it’s a circuit I feel confident at! I will take it one session at a time though and try to understand how the team works as quickly as possible. I know of Jamie (Forza’s team manager) he’s very experienced as a driver and a team manager. I’m looking forward to working closely with him this weekend”

Kieren Clark, Head of MB Partners’ Young Driver Academy, added: “It’s a shame to have to leave a team in the middle of a season, especially a very close knit team like Ricciardo, but you have to be selfish in this sport and do what is right for you, the driver. It was a very last minute decision to join Forza for the final round of the WSK.  We will see how it goes, hopefully Kiern will be able to replicate what he did last time in Adria. As a team and a brand, Forza have a long list of high credentials so I am confident Kiern will get on very well with them and continue to drive as he has done all season.”

Kiern will take to the track in Adria, Italy from 19th to 22nd May, hoping to recreate his astounding win from earlier in the year in his debut race of the WSK Champions Cup, as he astonishingly managed to clinch first place on the last lap.