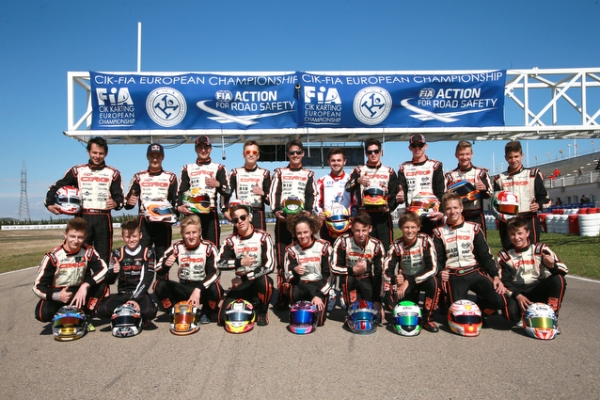 CRG drivers put in satisfying performances in the second round of the European KZ Championship and in the opener of OK and OK Junior in Zuera. Only the podium went missing to celebrate the Spanish exit. Paolo De Conto has been shining in KZ until the Final, as did Joyner in OK. Muth and Hauger in the top ten of OK Junior.

CRG works driver did not miss competitiveness and speed in Spain at the International Circuit of Zuera during the European KZ, OK and OK Junior Championship, but unfortunately the podium vanished when it seemed to be at reach, especially in OK with Tom Joyner.

As admitted by Dino Chiesa, “the glass is half empty and half full” at the end of the weekend of Zuera, but indications have been good even though team’s expectations were a lot higher.

DE CONTO VERY QUICK IN KZ, AS PUHAKKA WAS THE BEST OF CRG’S LOT

A good proof of competitiveness in KZ arrived from CRG’s driver Paolo De Conto, who has been very quick in qualifying ending second absolute –  43 thousands shy of the pole position set by Hajek. A positive result in qualifying was also obtained by the young Stan Pex of CRG Holland, who showing good progress, and in this occasion scored a great P4 being only one tenth off the pole position time. Flavio Camponeschi, on CRG-Parilla accused some delay instead, as did Nuova 3M’s Andrea Dalè and Simo Puhakka who was only 18th, while Jorrit Pex was last due to some physical problems. Heats highlighted again Stan Pex’s speed, as he was fourth and De Conto was fifth leading Camponeschi, who had put in a great recover. De Conto obtained a great third place in the Prefinal, but things changed in th Final and the Italian was 11th ending behind Stan Pex, while Flavio Camponeschi and Andrea Dalè closed their effort behind De Conto. Simo Puhakka managed to get some ground back in the Final and claimed the sixth place on CRG-Maxter, turning out to be the best of CRG drivers. Jorrit Pex experienced a troubled weekend and was forced to the retirement instead.

The Championship is still open after the first two rounds of Essay and Zuera. Among CRG drivers,  De Conto is fourth at 60 points, Camponeschi demoted to P5 at 54 points, after the second place of Essay, while Puhakka is ninth at 30. The third and final round to be held in Genk (Belgium) next July 31st,  will be the decisive run.

JOYNER GREAT PROTAGONIST OF OK UP TO THE FINAL

Tom Joyner started the first round of the OK European Championship very strongly on Zanardi-Parilla, claiming the pole position, taking a double win in the heats and winning the Prefinal. Such a great start did not materialize in the Final result, as Tom Joyner lost the lead with three laps to go due to a racing contact and rejoined in P4. While trying to get the podium back, Joyner was involved in another incident when in sight of the finish line, this put the word end on his race. That was a real pity. Joyner is anyway fifth in the classification with a gap to the top of only 20 points.

Among the other CRG drivers, the home driver Pedro Hiltbrand recovered very well from a not so great qualifying and was fourth after heats. A double technical issue in Prefinal and Final forced him to the retirement in both races though. The German Hannes Janker was the best of CRG drivers in the Final thanks to his fifth place, result that followed his tenth place in the Prefinal and the sixth after the heats. The Portuguese driver Andriy Pits put in a solid run recovering from P18 of the Prefinal up to the twelfth place in the Final, as did the Finn Paavo Tonteri who ended the Final in P13. Felice Tiene had a very difficult weekend instead and was forced to an early retirement in the Final due to an incident, after a good comeback from P29 of the heats to the 14th place in the Prefinal. That was a pity, as the seventh time set by Tiene in practice seemed to foretell a more interesting weekend for the Italian driver.

MUTH AND HAUGER WITHIN THE TOP TEN OF OK JUNIOR

The German driver Esteban Muth and the Norwegian Dennis Hauger turned out to be the most competitive CRG drivers in the first round of OK Junior, as they ended respectively in ninth and tenth place. The two CRG drivers have been shining also in their Prefinals, with Muth taking fourth and Hauger seventh. Hauger remarkably completed a stunning recover from the 30th time in qualifying. The French driver Pierre-Louis Chovet also showed a good progress from the 55th place in the heats to the 17th place in the Final, while the British driver Teddy Wilson had some setup problems that relegated him to P19 in the Final, after the great seventh time obtained in his Prefinal. The Canadian Antonio Serravalle, the Brazilian Gianluca Petecof and the German O’neill Muth could not qualify for the Final instead.

Muth is currently ninth in the classification at 21 points, while Hauger is tenth at 17 and Wilson is 16th at 11.

All results are available at www.cikfia.com

Dino Chiesa, Team Principal CRG: “We certainly could have hauled better results in Zuera, especially in KZ, where our objective was at least the podium, and in OK, where we could not get the victory with Joyner that dominated throughout up to that point. We tried some solutions with De Conto and Camponeschi in the KZ Final, but we could not get the results we had hoped for. Puhakka kept the initial technical configuration and obtained the best result for us with P6. Tiene had a series of problems in OK and an incident in the Final sent him off early. Hiltbrand has been strong up to the final stages, but a double engine failure stopped him in Prefinal and Final. Our other drivers went fairly well: Janker and Tonteri did not end far from the podium. Hauger was penalized in qualifying of OK Junior for not finding the right slipstream, but he recovered well up to the tenth place in the Final.  Esteban Muth run a solid weekend and took a final P9 without having time to prepare properly ahead of this round. Wilson has been strong all the way to the Final, but then he had some setup problems, while Chovet run a solid weekend showing a good growth.”