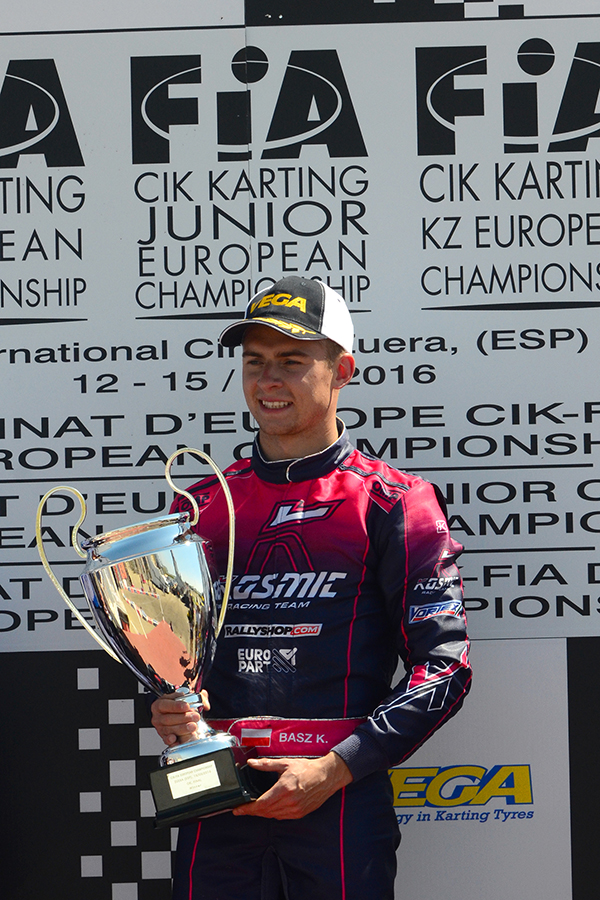 A terrific success of the Racing Department. This is the summary of the CIK European Championship’s competition held on the fast Spanish track of Zuera. Patrik Hajek and Karol Basz have clearly won their respective races, KZ and OK, bearing the Kosmic Kart-Vortex colours on the European top step in a few minutes.

KZ. Patrik has run a perfect weekend, taking the leadership since the qualifying, with a pole gained with a time of 59″141. Supported by an impeccable chassis and a very well-experienced, Hajek has closed two qualifying races in the lead, with a victory and a second place, resulting in a first position in the prefinal. In the prefinal our driver jumped promptly from the grid and led the race from start to finish, leaving no opportunity of attack to the direct followers, far more than a second under the chequered flag. The final was a copy of the previous race, the Kosmic Kart-Vortex chassis of Patrik has run fast at the traffic lights off and no one was able to worry him until the end. The podium was done, with Iglesias (finished second) and with Marco Ardigò, at the wheel of a Tony Kart-Vortex, manufactured in our own factory of Prevalle. In light of the well-deserved success and by virtue of the good things we did in the first KZ race of the European Championship in Essay (France), Hajek is third in the overall standings, just four points behind the leader Ardigò. The last round of the European Championship at the Belgian circuit of Genk (31st July) will see us as one of the favourites in the run to the title.

OK. If in KZ class our supremacy started since the qualifying, in OK category, as a debut in a CIK race, Karol Basz performance grew race after race over the weekend, until a clear and thrilling final victory. Basz and Noah Milell finished the sequence of heats, respectively, in the fifth and nineteenth place. In the prefinal Basz has taken the decisive step towards victory, leading the race and undergoing an overtaking of Joyner only in the final phase. The final was very exciting, especially in the second stage. After leading the race from the third to ninth lap Basz suffered the attack of Joyner, staying behind the rival for six rounds. When the pressure of the other two chasers, Lundgaard and Garcia, became tighter, Karol went back in the lead, taking a gap on his followers that allowed us to impose. The positive comeback of our other driver, Milell, who finished sixth, was discouraged by ten-second penalty given (front bearing in wrong position). Basz, with the points gained in both prefinal and final is the leader of the European Championship with 47 points.

OKJ. In the cadet class Théo Pourchaire reached the final among 75 drivers who entered this race of the European Championship. Winner of the race was Watt on a chassis (Tony Kart-Vortex) manufactured in our Italian factory.