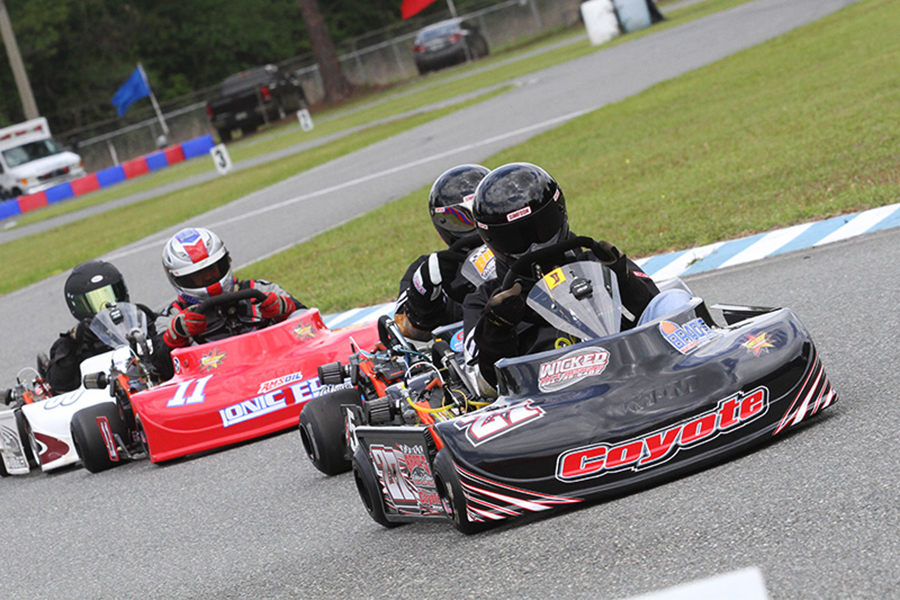 The Spencerport, NY Coyote Motorsports shop stayed busy throughout the off-months manufacturing and shipping chassis and parts to race teams around the country, while also preparing our own equipment for the big Jacksonville event that traditionally kicks off the Gold Cup Series every spring.

“Now that the long winter is officially over, we can take a moment to reflect on what was one of our busiest seasons since purchasing Coyote in 2007,” Mark Lipari stated. “Club and regional-level racing on the LO206 platform appears to have re-energized the market. This package promotes fun and affordable kart racing, and we are hard at work everyday to satisfy the needs of our customers – from Florida to New York to the Midwest and West Coast. We’re very excited about the future of 4-cycle sprint racing in the U.S.”

While karts and parts shipped out at a record pace, the Coyote Motorsports team also remained busy turning wrenches on their own chassis for their 2016 national season opener April 15-17 with the World Karting Association Gold Cup Series’ Spring Nationals at the fast 103rd Street Sports Complex in Jacksonville, FL.

Preparation was key as two Coyote drivers raced their karts to LO206 class feature wins against stout fields of competition and several more challenged for national victories throughout the weekend.

Farmer bested many of the Southeast’s top Masters drivers for the Saturday win, his first in the Gold Cup Series in several years. Farmer returned Sunday to challenge for his second win of the event. Brad would settle for a close P2 finish on Sunday, and he’ll enter round 2 of the series second in Masters class points and only 5 points out of the lead.

O’Neal led the Coyote charge in Saturday’s LO206 Heavy final. Patrick raced his Coyote Wide Track to a solid fourth-place finish in the 16-kart field. Yarbrough settled for P6 on this day with Carroll finishing P8.  Carroll had a fine qualifying effort, timing third for the heat race.

Matt Mayes’s weekend was impressive at Jacksonville. Mayes has been fast all winter on his Coyote at the 103rd Street Sports Complex, and continued to look good at the WKA Nationals. Mayes finished P3 both days in the competitive Senior Pro Gas Animal Heavy category.  Matt challenged for wins throughout the weekend, but fell just short. He was able to pocket some purse money WKA has posted to help with his karting efforts. Great job, Matt!

Jacksonville native Sean Meier ran up front all weekend but missed out on a feature win. In the Pro Gas Animal Medium division, Meier drove his 2016 Wide Track to finishes of third Saturday and fourth on Sunday. Meier also competed in the LO206 Heavy division, and finished third Sunday.

Youngster Blake Boon made the move to the Junior Sportsman class after a couple of years racing in the LO206 Kid Kart division. The Boon & Sons-sponsored racer adapted well to the faster Pro Gas Animal and LO206 Sportsman engines; he rode his 2016 Wide Track chassis to a P5 finish Saturday and P6 on Sunday in LO206, and finished P4 and P5 in Sportsman Pro Gas Animal Lite. We’ll look forward to Blake’s improvement in his new class as the season progresses!

Talia Moffett finished 6th in both Junior Pro Gas Animal Lite and Heavy on Saturday, and returned Sunday to improve one spot in each division, finishing 5th in Lite and Heavy.  Thanks to Talia and Moffett Racing for making the long journey from Illinois to Jacksonville to support Coyote and the Gold Cup Series.

“I want to personally thank all the Coyote teams for their support at Jacksonville,” Mark Lipari added. “Congratulations to Jason and Bradley on their victories. Matt Mayes had some great runs in Pro Gas, and our younger drivers gained experience and improved all weekend. We’re looking forward to the rest of the season. Great job, everyone!”

The Coyote team now shifts their attention to June with a couple exciting events on the schedule. Coyote Motorsports will be attending the first-ever AKRA American Sprint Cup Series Northern Tour event at our home track, the Genesee Valley Kart Club in Avon, NY. This event is June 3-5.  The next WKA Gold Cup event is at Carolina Motorsports Park June 24-26.

The new Driver Profile section of the site – found at http://coyotekarts.com/portfolio/ – works to promote the racers who continue to promote the Coyote brand around the country. We invite all Coyote racers to complete a driver profile at the link listed below.

This profile includes information on your team, racing program and sponsors, and is another way to earn some recognition for not only yourself, but your supporters, as well.

“The driver profiles were created with an intent to give racers some national recognition on our website and show our appreciation toward our customers’ loyalty to Coyote products,” Mark Lipari stated. “Victory lane shots, action shots and the like make for great front-page photos for our website. We’ll be doing more showcasing of these driver profiles in the future, so we urge all Coyote racers to submit their information and photos.”

Once you complete your profile, our website team will post it within 24-48 hours, along with photos of your kart. Your profile will remain on the site and we’ll also share it on our Coyote Motorsports Facebook page, which is nearing 2,000 followers!