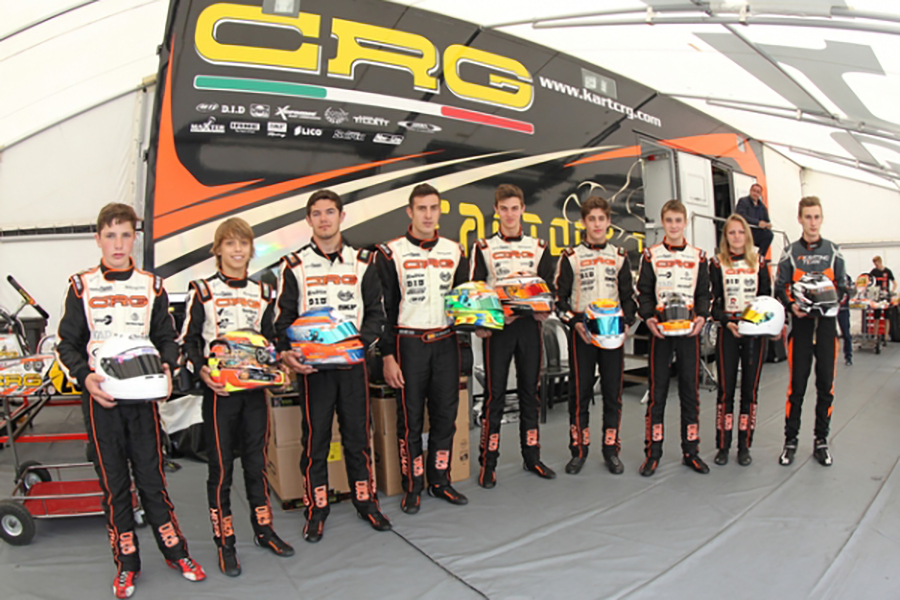 The Polish driver Lukasz Bartoszuk dominated DD2 on CRG in Castelletto’s second round of the Euro Rotax Challenge and took the lead of the classification. Good but unlucky race for Luka Kamali and Oriol Dalmau Caballero. Brand and Cohen defended themselves well in Senior. Kilian Meyer to the fore in Junior.

CRG works team obtained a great result at the Circuit 7 Laghi of Castelletto di Branduzzo in occasion of the Italian round of the Rotax Max Euro Challenge. The Italian outfit put in great performances in all the three categories it has been competing for, confirming a good supremacy for the CRG squad led by Martin Reuvers with the technical support by HRS Racing Engines.

The most powerful category, Rotax DD2, highlighted the winning qualities of the CRG chassis, as the three team’s drivers put in great performances. Lukasz Bartoszuk has been the splendid winner of the Final after taking the win in the Final in a CRG one-two with his team mate from Germany Luka Kamali. Kamali unfortunately had to retire from the Final due to an early incident while he was trying to get P2 back behind Bartoszuk. CRG result could have therefore been even better, if it was not for this incident.

The Spanish driver of CRG Oriol Dalmau Caballero has also been very quick. He was sixth after heats, but was hit by bad luck in Prefinal, as he had to stop due to a technical problem. His comeback in the Final from the last spot of the grid to the eleventh place at the flag is quite adamant on how  Dalmau could have been part of the fight for top positions.

Lukasz Bartoszuk installed himself on top of the classification at 170 points after the two races of Genk and Castelletto, while Luka Kamali is currently 14th at 107 points and Oriol Dalmau Caballero 29th at 51.

GOOD RECOVERY FOR BRAND IN SENIOR

A good performance has been put in by the British driver Ed Brand and by the Israeli Ido Cohen in Senior, but their end result suffered from the delay accumulated in qualifying, that also penalized them in the heats. Brand managed to get a stunning 20 positions back in Prefinal and took P7, while Cohen had an incident at the last lap of the Prefinal. Brand initially occupied the fourth position in the Final, but then struggled a bit with his tyres and had to settle for P15, while Cohen recovered up to P21.

The competitiveness shown in Junior has definitely been very good too, as the Kilian Meyer recovered well from an incident in the heats. The Spanish driver recovered up to P13 in Prefinal, and then ended his effort in tenth place in the Final.

The Swede Madeleine Radne managed to find a place for the Final after the second chance race, as one of his two team mates, the German Phil Dorr who inherited the position of the fellow-countryman Henri Jung that was given a 10 seconds time penalty. Madeleine recovered up to P24 in the Final, while Dorr was 30th.

CRG Rotax team manager Martin Reuvers’ comment: “It has been quite a tough weekend for Junior and Senior, while things went really well in DD2 where we did an amazing job. Bartoszuk has been really quick since the beginning, I am sorry for Kamali who had an incident in the Final after a front row start. Dalmau has also been very quick, despite the DNF in Prefinal due to a gearbox failure. Meyer obtained the tenth position in Junior, which is a good result and a nice step forward compared to last year. The other three kids of Junior still have to gain some more experience. Cohen grew a lot in Senior. This time he could not get a good result only for the incident at the last lap of the Prefinal. Brand put on a new set of tyres during the Prefinal to gain some positions, and that did work out very well as he was seventh completing some very quick laps. Brand was then penalyzed by tyres wearing off in the Final mainly due to the battles he had to fight. Overall, I am quite happy. The competitiveness of our chassis has been excellent: we are on top in DD2”.

The third round of the Rotax Max Euro Challenge is scheduled for next July 24th in Zuera (Spain).