Heats Shuffle the Ranking at Castelletto 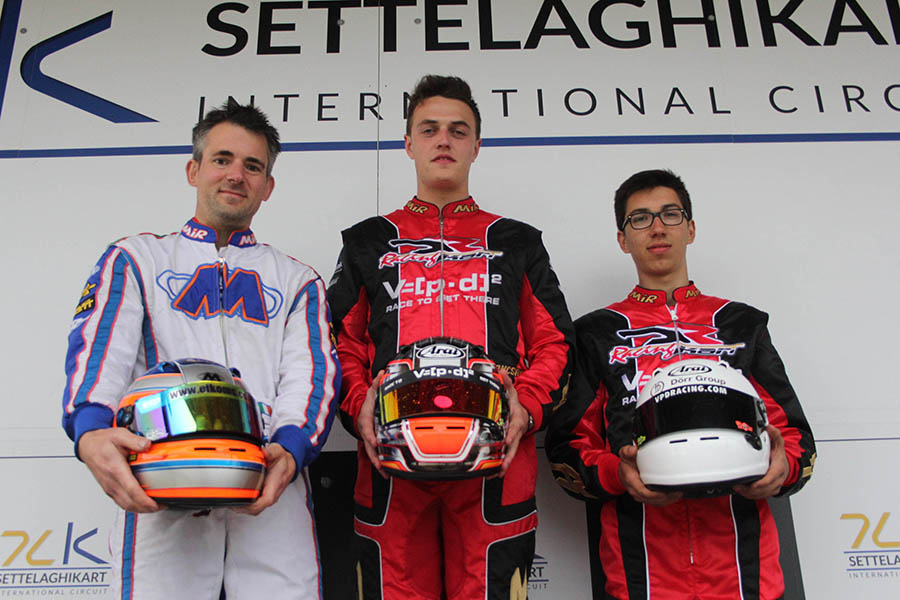 The second round of the ROTAX MAX Euro Challenge in Italy entered its next stage of qualification today. All told 15 heats were on the agenda marking the first race action of the weekend on the 1.256 metres long track of 7 Laghi at Castelletto Di Branduzzo. After the weather had been quite unpredictable during the last days, the sun finally came out and made for a perfect and summery racing day.

Mark Kimber (Strawberry Racing) did not leave any doubt in the junior category. The pole sitter was totally in control and won each of his heats thus defending the top of the class. Behind him Axel Charpentier (Strawberry Racing) was in good shape too. The championship leader took two victories but had to be satisfied with fourth place in his last race. Yet the Frenchman’s effort was strong enough for the second place of the heat ranking. In third spot followed Glenn Van Berlo (Hugo Motorsport) who ended each of his races consistently in second position. Tom Canning (KR Sport) from the UK looked back on mixed results in the heats but celebrated one victory of the six heats, too. Consequently he took the fifth place in the heat’s merge ahead of Oli Caldwell (KR Sport) from the UK.

In the senior’s heats a new face conquered the top: Christopher Dreyspring (VPDR TAD Racing) celebrated two wins and gained another second place which meant the first Euro Challenge pole position for the German driver. Friday’s quickest Tom Gamble (Strawberry Racing) was fast again, too. He confirmed his skills by two victories but had to cope with an exclusion, too. That made him drop back to eighth place of the ranking. So it was UK driver Josh White (Coles Racing) who asserted himself in second place ahead of Irishman Gary Donnelly (Strawberry Racing) and championship leader Nicolas Schoell (Strawberry Racing). The reigning junior champion Jack McCarthy (Strawberry Racing) from the UK complemented the top five positions for Sunday’s prefinal.

The DD2 heats were highly balanced. With Germany’s Luka Kamali (CRG S.P.A.), Poland’s Lukasz Bartoszuk (CRG S.P.A.) and Hungary’s Ferenc Kancsar (VPDR) one celebrated different winners in each of the three races. In the end it was title defender Ferenc Kancsar who gained the best results in the other heats putting his DR kart on the top of the gearbox grid. Lukasz Bartoszuk tied with Luka Kamali after the heats but thanks to the better qualifying result the Pole took the second place in the heat’s merge ahead of his German opponent. Fourth place went to Constantin Schoell (Daems Racing) in front of Friday’s pole sitter Mick Wishofer (VPDR). Championship leader Kevin Ludi (Spirit Racing) was without fortune. He had to retire in one heat – the main reason for a disappointing twelfth place before the prefinal on Sunday.

As for the DD2 Masters Friday’s quickest Tomokazu Kawase (Paul Carr Racing) was not able to tie in with his qualifying performance and dropped back to 20th place in the overall grid. Equally Martin Pierce (Uniq Racing Team) from Ireland made his way up the ranking. The opening round winner drove three consistent heats and was rewarded with the 15th place and the Masters’ lead.

Now that the grids are set everyone is looking forward to the main races on Sunday. These will kick-off by 11.20 a.m. with the prefinals while the all-decisive finals will start by 13:40 p.m. More information regarding reports, photos, results and live TV stream are available on the official websites www.rotaxmaxeurochallenge.com or www.telemundi.com.

To the media: Text and photos are of charge for editorial use. If you need more information or further photos please have a look at our website www.rotaxmaxeurochallenge.com or contact us by info@rgmmc.com.