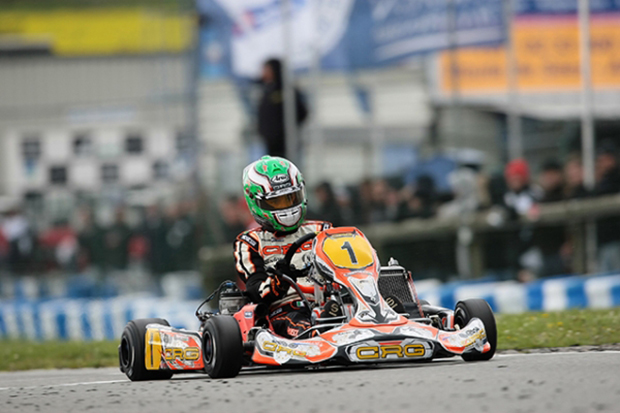 CRG works team will be busy on track this coming weekend in Spain for the European Championship KZ, OK and OK Junior and in Italy for the Rotax Max Euro Challenge in the three categories DD2, Senior and Junior.

CRG will be on track for two particularly interesting and exciting international appointments that will take place in the same weekend of May 15th. The Italian outfit will compete in fact in Zuera for the second round of the CIK-FIA European Championship with KZ on track alongside OK and OK Junior. At the same time, the team will be busy in Castelletto for the second round of the Rotax Euro Challenge.

IN ZUERA CHARGING FOR KZ

KZ is ready to get on track for the second round of the season, as Flavio Camponeschi, on CRG-Parilla, will be among the main favourites in Zuera after the strong final of Essay, where he ended second and gained the third place of the classification. Alongside Camponeschi, Paolo De Conto on CRG-Maxter will also be among the protagonists of the weekend. He just missed out on getting the first podium of the CIK-FIA season, after being among the quickest in Essay. Simo Puhakka, also on CRG-Maxter, will be the third color bearer of CRG in KZ. The Finn is quite motivated to get some ground back in the classification, after the tenth place hauled in Essay.

Among the 25 participants of KZ, the world champion Jorrit Pex who is fresh leader of the DKM after Wackersdorf’s opener, his brother Stan Pex with CRG Holland, and Andrea Dalè with team Nuova 3M will also be some certain protagonists of Zuera’s weekend.

A STRONG TEAM IN OK AND OK JUNIOR

The round of Zuera is going to be quite important as it will open the European 2016 Championship for classes OK and OK Junior. CRG will line up its multi-winners chassis powered by Parilla given to top drivers. Felice Tiene (fourth last year in the European Championship KF), the home hero Pedro Hiltbrand, the Finn Paavo Tonteri (also showing a great shape in the first DKM race held in Wackersdorf), Tom Joyner on Zanardi (second last year in the European Championship), the German Hannes Janker (sixth in 2015) and the Portuguese Andriy Pits will all compete in OK.

Hopes are high also in OK Junior, as the Norwegian Dennis Hauger is now ready to aim to the podium of this category after the step up from 60 Mini. The British Teddy Wilson, the Canadian Antonio Serravalle, the Brazilian Gianluca Petecof, the two German brothers Esteban and O’neill Muth, and the French Pierre-Louis Chovet will complete CRG lineup for OK Junior.

Andrea Rosso will also be competing on CRG chassis run by team Morsicani Racing in his debut in OK Junior. Tara Eichenberger will race for X-Rei Motorsport and the Norwegian Emil Merli Heyerdahl for CRG Holland.

CRG TO FIELD ITS COMPLETE SQUAD IN CASTELLETTO’S EURO ROTAX

During the same weekend of Zuera, the Circuit 7 Laghi of Castelletto di Branduzzo will stage the second round of the Rotax Max Euro Challenge after the opener that took place last April 3rd in Genk.

The Polish driver Lukasz Bartoszuk will be present in Castelletto for CRG after the great result he scored in the latest round of DD2. In Genk, he claimed the second place which also gave him the second place of the classification. The German Luka Kamali, 14th in Genk but definitely among the main interpreters of the category as he was seventh in the 2015 campaign, will get to Castelletto all set to score a good result. The Spanish driver Oriol Dalmau Caballero will also compete in DD2.

CRG will field the British driver Ed Brand in category Senior. He ended last year’s campaign in fourth place and was eleventh in Genk. The Israeli Ido Cohen will also be among of the protagonists of OK this season.

Team CRG will be represented in category Junior by the Spanish driver Kilian Meyer, by the two Germans Phil Doerr and Henri Jung, and by the Swede Madeleine Radne.