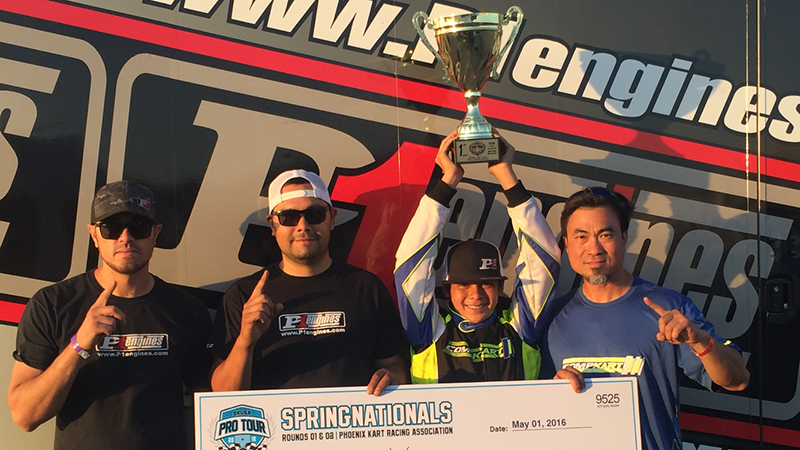 Making the short trek to the Arizona desert, P1 Engines was once again at the front of the field in Superkarts! USA (SKUSA) competition. With drivers littered in multiple classes, the California based company walked away with another national level victory in the X30 Junior division.

“Though the results for all of our drivers were not what we had hoped, we were still able to walk away with a victory,” explained P1 Engines Jesus Vasquez. “Drivers showcased P1 Engines power at the front of several of the TaG fields with competitive lap times and solid heat race results.”

In the X30 Junior class, Dante Yu had a small setback during Saturday’s action but managed to drive back up to a solid seventh place result. On Sunday Yu managed to stay out of trouble and remained top-three throughout the two heat race format.Securing a starting position for the main event in the top-four, Yu took the lead with four laps to go and never looked back taking home the Pro Tour victory.

P1 Engines powered Oliver Calvo also had enough to win finishing second on Saturday with the race cut short due to weather. Poised to attack, the X30 Junior was forced off the track with four laps remaining before Calvo could make his bid for the lead and win. Sunday action would see Calvo suffer a flat tire in qualifying but the up-and-coming champion managed to drive through the field in the two heat races and main event to claim a fourth place result. After qualifying out side the top-ten on Saturday, Tomas Mejia made up for it when wheel-to-wheel action commenced and was able to stand on the podium with a third place result in the day’s main event. On Sunday, Mejia qualified ninth and finished eighth in the final. Edward Portz Jr., Max Hewitt and Nicholas d’Orlando all had top ten results with ninth, ninth and tenth respectfuly with d’Orlando grabbing the pole position in Sunday’s competition.

In the stout X30 Senior field, Luke Selliken qualified outside the top-ten but rebounded when the green flag for racing flew, driving forward to a top-five result in fourth. With a competitive field of international drivers, times were tight as the difference between first and 30th was a mere half a second. On Sunday, Selliken qualified P4 but spun early in the main event due to contact and finished 16th. Mateo Vigano also had great speed running from last to tenth in Saturday’s main event alone after failing to finish the second X30 Senior heat race. Vigano was running second during Sundays main event, poised to attack for the race win before being driven off the course by a fellow competitor. Kellen Ritter had the speed and finished tenth in Sunday’s action while Nick Ramirez improved from Saturday’s results to finish eighth on Sunday.

Daniel Inzunza had a great run in the IAME Mini Swift class qualifying inside row two on Saturday. Finishing a strong second in heat race one, heat race two would see Inzunza sent off the track and down the running order. Forced to start deep in the field for the main event, Inzunza drove like a seasoned veteran to finish 15th. On Sunday, Inzunza remained consistent qualifying tenth and finishing tenth in the day’s main event.