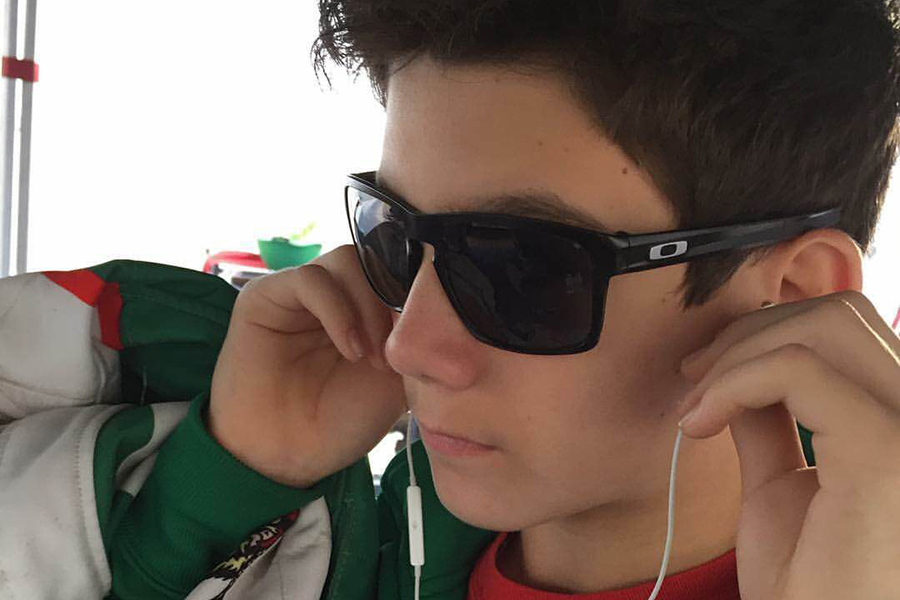 The SuperKarts! USA SpringNationals turned out to be one chaotic event for the Junior ranks.  The weekend consisted of a variety of on track incidents and red flags, dust storms and threats of bad weather all mixed in with a little bad luck for d’Orlando Racing’s rookie Nicholas d’Orlando.  From mid-pack qualifier on Saturday to the pole position on Sunday, he would bring home 11th & 10th place finishes in his SKUSA Pro Series debut in the X30 Junior division at Phoenix Kart Racing Association in Glendale, Arizona.

With one day of practice on Friday before the double race weekend, Nicholas was quickly up to speed in the front third of the field as he and his KoeneUSA team got the No.015n TonyKart ready for Saturday’s round one of SKUSA SpringNationals in his X30 Jr. rookie debut.

The new experience on the Envico tires was a learning experience for Nicholas as his key early qualifying laps were spent in traffic, ending in a disappointing 17th starting spot.  Looking to move up in the Heats, bad luck would reign almost immediately at the green flag of Heat 1 forcing him to retire from racing action.  Starting from the tail of the 42 kart grid in Heat 2, Nicholas would have a great view of what was more demolition derby than kart race in the mid-pack of the field, resulting in a smoke screen like only Phoenix, AZ can offer.  Like something out of the Days of Thunder movie, Nicholas emerged through the mid-pack smoke & carnage and would be one of the few karts behind the chaos that actually made it through, however the red flag emerged halting racing action forcing full restart.  On the second try, Nicholas would once again navigate from the tail of the field and start his assault on the grid passing at every opportunity to move forward to secure a better starting position for the final.  As luck would have it, the Heat was shortened to a 4-lap sprint from the original 8-laps scheduled but Nicholas was able to move through more than half the field ultimately finishing the Heat in 20th position.

The main event would also be cut short as the weather in the desert turned to questionable conditions with rain in the early laps.  It was an impressive race as

Nicholas moved up to 11th in the mere 8-lap feature.  It was tough day with a steep learning curve for the young rookie as he navigated only 12 total laps of the total 20 available due to adversity and shortened races.

“That was one crazy day of racing,” said Nicholas. “We had a chain come off in Heat 1 than the big wreck in Heat 2 and bad weather in the final. I am proud of our team.  We over came a lot today. I feel like we had the speed to overcome the Qualifying and the Heat race incidents to a much better result in the final had the race gone the full distance.”

Sunday would be less chaotic for the second & final round of the SKUSA SpringNationals and Nicholas kicked off the day learning from the day before, putting in an impressive Pole Position effort in Qualifying. He would lead the 42 kart field of Juniors to the green flag in Heat 1 but something was amiss, falling back to finish Heat 1 in the 8th spot and hold station there for Heat 2.

In the main event, Nicholas was poised and ready for action.  But an unfortunate start where the entire outside row was slow to the green flag, Nicholas would fall back into the mid-teens position in the opening corners.  Looking to recover quickly, the hard charging rookie was starting to come through the field but he would run out of laps to finish 10th.

“To end the weekend on a higher note was very positive,” said Nicholas. “It was definitely a less dramatic day than yesterday was. We were fast all day & we had a great qualifying effort. I thought we would have a better finish in the heats but we had a really strong run in the final to end the weekend with a top 10 finish.  I like the new X30 package but clearly we have some work to do in preparation for the next round.  I look forward to being back in the X30 package at the SKUSA SummerNationals and I am confident we will be better prepared to fight for position at the point of the field.”

d’Orlando Racing and Nicholas d’Orlando would like to extend their Thanks to KoeneUSA (www.teamkoeneusa.com), including Mike Maurini, Martijn Koene, tuner Adam Johnson for their continued hard work, support and dedication as well as special Thanks for the support of their sponsors at adidas Motorsport/Fyshe USA (www.adidasmotorsport.com), Kool Nerd Clothing (www.koolnerdclothing.com), Focused Project Management (www.focusedpm.net) and Iona Preparatory School (www.ionaprep.org).