Second and Fourth for JHM at Mayor’s Cup 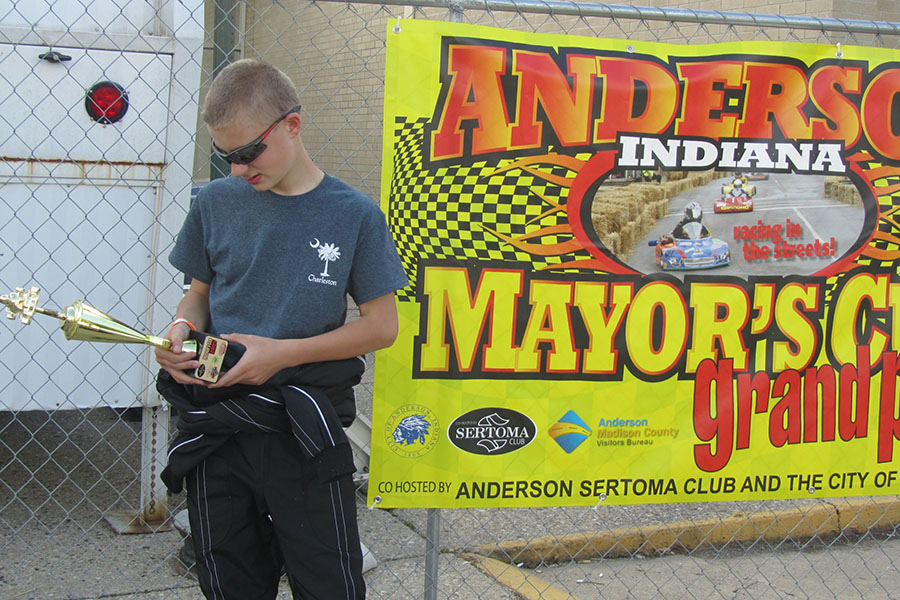 Fresher battled stomach flu Friday night and Saturday, forcing him to miss all of Saturday’s activities which were conducted in steady, if not heavy at times, rain. The 13-year-old driver of the Edwards-Rigdon Construction / JHM #62 Junior 1 Birel got one practice session in then started sixth in the seven-kart Junior 1 race through the streets of Anderson (IN).

He instantly jumped to third at the drop of the green and quickly caught up to Kylan McFall to battle for second. Fresher (Avon, IN) swapped the runner-up spot with McFall for several laps early before taking over when she lost it in the turn three chicane.

Fresher then set his sights on leader Carter McFall and went to his rear bumper before the turn three chicane and lapped traffic caused him to spin out about half-way through the 25-lap feature through the streets of Anderson (IN). He survived this and a second spin in the same turn to take P2 easily behind Carter McFall.

Team-mate Pearcy, just signed to the JHM team the previous week, found the rain somewhat to his liking in Saturday activities. Pearcy led ten of the 15 laps in the heat race before his wicked loose JHM Senior Yamaha Birel slipped in turn two, relegating him to third.

Sunday came out sunny and the team’s dry setup was even better as the kart performed flawlessly in the morning practice. Starting third in the ten-kart senior field, the clutch instantly mal-functioned at the start of the race (locking up at 8200 instead of 8600 RPM) for the 18-year-old Shelbyville (KY) ace, forcing him to fall to eighth. Despite this, he got the most out of his kart and used the superior power of his BBS Race Engine Development Yamaha to recover to fourth, turning the second fastest race lap in the process.

“I’m absolutely ecstatic with Jordan’s performance,” team general manager Jim Howe said, “He showed so much talent and great decision-making in that race. It’s hard to believe this was his first-ever street race.

“We’re disappointed with Daniel’s finish considering how stout we were in the practice Sunday morning and in the rain yesterday,” Howe added. “But it’s a long season with lots of racing left. We’ll get the clutch fixed and make other improvements. We’ll get ‘em!”

The “Mayor’s Cup Grand Prix” was the season-opener for the Southern Indiana Racing Association (SIRA) which races at street circuits throughout Indiana. The next SIRA race is June 4-5 “Mel Kenyon Classic” in the streets of Lebanon (IN).

Next up for the team is the May 7 Tony Stewart Racing Series club race at the historic Whiteland (IN) Raceway Park. Fresher will run the Junior Sportsman class for the team while Pearcy takes the night off.