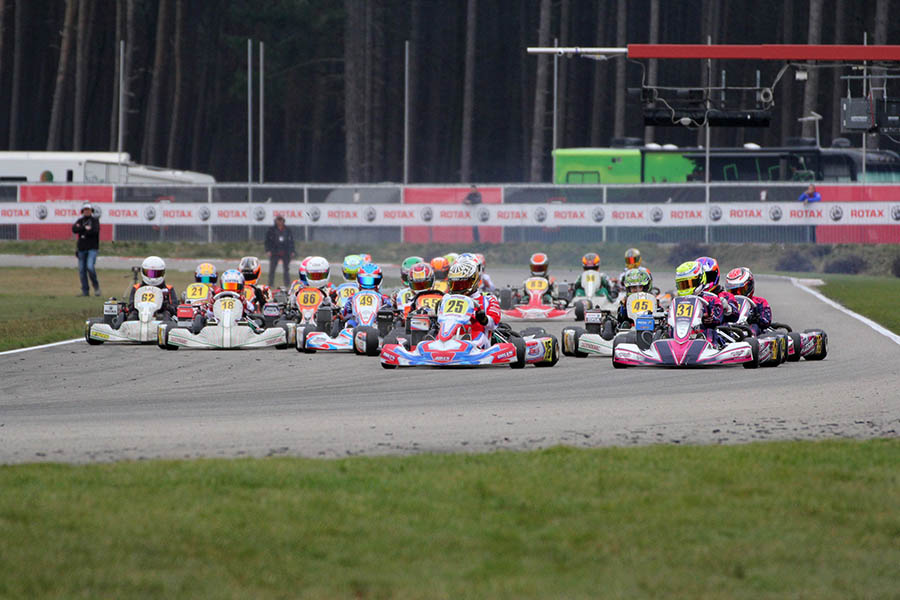 There are only a few days left until the ROTAX MAX Euro Challenge goes for the second round of the year. From 9th to 15th of May 2016 Italy marks the next stop of Europe’s unique ROTAX series. The organising RGMMC Group expects full grids in the three categories of junior, senior and DD2.

Scene of action will be the beautiful karting circuit “7 Laghi” at Castelletto Di Branduzzo. As its name implies (seven lakes) the 1.256 metres long track is situated right within a lake district not too far away from Milan, providing a good opportunity to combine a few days of holiday with the racing weekend. Castelletto will not only be the second stop of the year, but marking the halftime race of the season. And there is another fact making the event outstanding: Italy is always a very special event since it represents the sporting and economical home of kart racing. All told the ROTAX MAX Euro Challenge will give its sixth appearance in the country of pasta, pizza and dolce vita. After the season opener at Genk revealed the first pacemakers of the year, everyone is excited if the favourites will confirm their performances, especially since one celebrated double winners in each category during the first round in Belgium.

Having a look at the upcoming competition of the juniors, Axel Charpentier (Strawberry Racing) is the hunted. After his double win at Flanders, he clearly leads the championship. Yet Dutchman Glenn van Berlo (Hugo Moorsport) is close at his heels missing only four points. But even the other chasers such as Finland’s Lauri Leppa (VRT) or the British duo Oli Caldwell (KR Sport) and Mark Kimber (Strawberry Racing) – not to forget ROTAX Winter Cup winner Adam Smalley (Coles Racing) already left a mark.

With his double triumph at Genk Nicolas Schoell (Strawberry Racing) plays the leading role in the senior class. The youngster from Austria is only racing his first senior season and was able to stand up against the established and more experienced opponents immediately. Surely that was not a flash in the pan. But he will not be given a walkover either. His hardest opponent comes from the same team: Gary Donnelly (Strawberry Racing) was the only one at Genk who kept the winner’s pace. Let’s see if the Irishman is ready to hit the jackpot this time. Moreover Sam Marsh (Dan Holland Racing) from the UK and Belgium’s Glenn van Parijs (Bouvin Power) follow in the championship table right behind, both aiming for more than supporting roles. That applies to the reigning vice champion Rinus van Kalmthout (Daems Racing). The Dutchman is racing his last karting season and wants to take his leave victoriously.

Austria’s Constantin Schoell (Daems Racing), Denmark’s Martin Mortensen (RS Competition) and Switzerland’s Kevin Ludi (Spirit Racing) were the outstanding DD2 drivers of the opening event, taking the top in turns throughout the weekend. Yet Kevin Ludi did the best job, winning both the prefinal and the final, thus celebrating his first Euro Challenge win ever. Consequently that success will quicken him on Italian soil. Backlash will come from Poland’s Lukasz Bartoszuk (CRG S.P.A.) and Barrie Pullinger (Dan Holland Racing) from the UK, who are following in second and third place of the table.

When it comes to the special classification of the DD2 Masters Martin Pierce (Uniq Racing Team) is the prey. By his double win at Genk, the former Masters champion gained a lot of points, but it is nothing to rest on. His Irish fellow countryman Richard Faulkner (Coles Racing) is not too far behind and third placed Slawomir Muranski (Wyrzykowski Motorsport) mustn’t be underestimated, especially not after his great performance at the ROTAX Winter Cup.

All told the ingredients promise a very exciting show at “7Laghi”. Everybody is invited to join the race action as RGMMC offers a full range with live streaming, live timing and social media coverage. More information regarding reports, photos, results and live TV stream are available on the official websites www.rotaxmaxeurochallenge.com or www.telemundi.com.