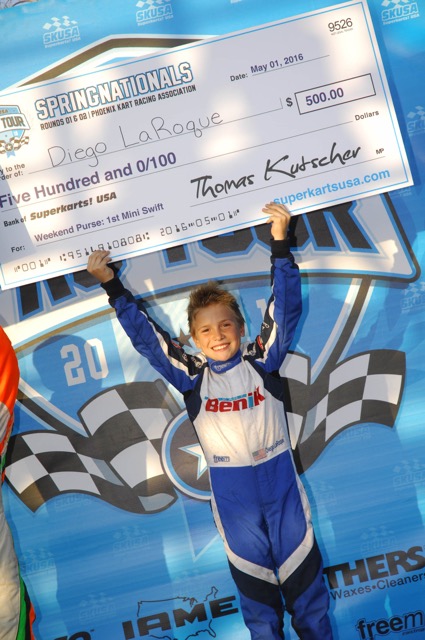 Starting his season on a high note, BENIK Kart driver Diego LaRoque wasvictorious in the Rotax Micro MAX division at the first round of the MAXSpeed Entertainment promoted US Open series held April 21-24 at NOLA Motorsports Park in Avondale, Louisiana. The following weekend, he topped the blocks in the IAME Mini Swift division at the opening round of the SuperKarts! USA (SKUSA) Pro Tour, held at the PKRA facility in Glendale, Arizona.

“Traveling back-to-back weekends for national events is a difficult task for every team that attempts it,” said Aaron LaRoque, Diego’s father. “I would like to thank both MAXSpeed and SKUSA for putting on the highest quality events in the country; it makes it easier for all of us.”

“My mechanic Nick Strasbaugh and I have been working really well together so far this season,” explained Diego. “With his help and my BENIK chassis, it has been easy for me to be fast and competitive every session. I would like to thank Nick for all of his hard work and efforts.”

Building upon the Rotax Challenge of the Americas, where LaRoque claimed a victory in the final round of the series, the future motorsports star has put together a string of podium finishes including two victories and is one to watch for the remainder of the 2016 season.

Diego LaRoque would like to send an extra special thank you to Team BENIK for their top-notch teamwork and superior trackside support.