Spectacular CRG at the Opener of the German Championship in Wackersdorf 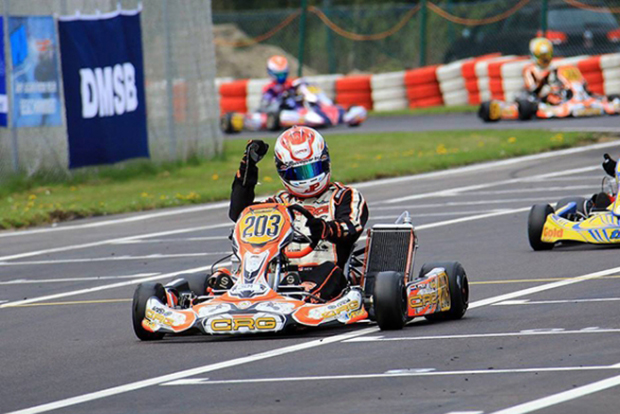 The drivers competing on CRG chassis have been great protagonists at the circuit of Wackersdorf (Germany) in the first round of the German Championship. Jorrit Pex in KZ2, Max Tubben in Shifterckart Cup, Paavo Tonteri in OK and Dennis Hauger in OK Junior.

Spectacle did not go missing in the opener of the DMK in Germany at Wackersdorf. Four categories made it to the track, as alongside KZ2 the new KZ2 Shifterkart Cup took also place for semi-professional drivers. A lot of strong names of international karting came to the fore, including a big number of CRG drivers in a kind of festival of the Italian chassis that has been absolute protagonist of the first round of the German Championship.

CRG driver Jorrit Pex, who is the reigning world champion and winner of four German championships in a row from 2011 to 2014 was again in his place in KZ2. Jorrit Pex and CRG Holland won in fact the first of the two Finals of Wackersdorf after scoring the pole position, 11 thousands of a second clear of his brother Stan, and after winning both qualifying heats. His victory in Race-1 has been absolutely spectacular: he managed to win his campaign at the end of a good duel involving him, Hajek, Forè and Ardigò, as the third step of the podium went to another CRG driver, Simo Puhakka, on track with CRG Racing Germany. Paolo De Conto has also shown a great competitiveness on CRG run by Renda Motorsport. He was fifth at the flag after a good comeback race, while Fabian Federer was eighth on CRG run by SRP Racing Team and has been among the quickest of the first part of the race.

Simo Puhakka stalled at the start of race-2, which caused a multiple incident involving also Paolo De Conto who started right behind his team mate: this event put off two of the absolute protagonists on CRG. Jorrit Pex has been again among the quickest and was second behind Forè, scoring another podium that launched the CRG Holland driver on top of the classification. The podium was rounded up by another CRG driver, Daniel Stell, of Team SRP. Fabian Federer was eighth again, while Stan Pex was 13th after the DNF in Race-1. Dylan Davies of CRG Keijzer Racing was 19th in race-1 and 15th in race-2.

In KZ2 of DMSB Shifterkart Cup the two finals were won by the Dutch driver of CRG Holland Max Tubben. On the podium of race-1 also two other drivers of Tinini Group: the Austrian Christoph Hold on Maranello and the German Maximilian Paul on DR. Among CRG drivers, a great fourth place was obtained by the Spanish driver of Renda Motorsport Enrico Prosperi as the Swede Andreas Johansson and the Dutch Symen Wiggers of CRG Holland ended respectively in sixth and seventh place. As said, Max Tubben won also race-2, while Christoph Hold was second on Maranello and Maximilian Paul fourth on DR. The fifth and eighth place went to Symen Wiggers and Max Weering, both on CRG Holland. Max Tubben is currently leading the championship, with Christoph Hold second and Maximilian Paul third.

The new OK category had 18 drivers at the start. The ruler in this case has been another CRG driver: the Finn Paavo Tonteri, who made it to the track with CRG TB Racing Team. Quickest in qualifying, Tonteri won both heats and then the first of the two Finals. In race-2 the CRG driver managed to get on the podium in P3, which earned him the classification lead, one point clear of race-2 winner Basz. A good race in OK was also put in by the German Tim Troger of CRG TB Racing Team. He was ninth in Race-1 and 12th in Race-2, as in the second Final he was proceeded by the Russian of  CRG Keijzer Racing Ivan Nosov.

GREAT RESULT FOR DENNIS HAUGER: ON THE PODIUM OF OK JUNIOR

The young Norwegian driver Dennis Hauger has been shining among the protagonists of OK Junior. In Wackersdorf he confirmed his speed, fighting always on top. Hauger, on track with CRG Holland, started on a high with the sixth time in qualifying at only 42 thousands from the pole position, keeping his momentum in the heats claiming two victories, one of which was turned later on into a P21 due to a time penalty. This also forced him to the eleventh time of the provisional classification after heats. The young driver of CRG was not upbeat and counter-charged in Race-1 scoring a good podium in P3. He later on confirmed his place among the quickest of race-2, ending with a spectacular P2, even if then he was relegated to the eighth place by a 5 seconds time penalty. Thanks to these two results, Hauger is currently holding a promising fourth place of the classification.

Among the quickest on CRG also Tara Eichenberber of X-Rei Motorsport, who was seventh in qualifying and tenth in Race-1, while the Russian Lev Golovin of CRG Keijzer Racing was eighth in race-1 and sixth in race-2 and  Luca Maisch of CRG TB Racing Team was fifth in race-2.

The next rounds of the German Championship:

All results available at www.kart-dm.de/en/home/