After and wet start to the season at Race #1, Race #2 was blessed with great 80 degree days. The tight Sprint track made for a grueling challenge for the drivers. The GoPro feature 80 Masters class had a strong turnout of 10 karts. Kid Karts ran for the first time in series history as part of the Saturday practice program and all had a good day. 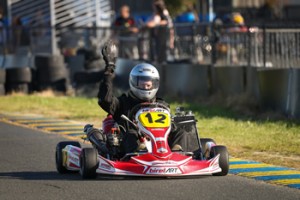 With 10 karts, 80 Masters had a strong turnout. Charles Hastings took his now customary position on pole with John Collins 2nd in his new kart with Tom Nelson 3rd. In the first Pre-Main, Nelson had troubles on the second lap and pulled off. Hastings took the win closely followed by Collins and Roger Cornwall with last month’s winner Dave Holstein in 4th. In the second Pre-Main, Collins got the lead and Hastings had to chase. In the end, Collins took a 1 second win, Hastings 2nd, Cornwall 3rd and Allen Miller 4th. In the Main, Hastings lead Cornwall until his kart came to a stop on lap 11. Cornwall then drove on to a 3 second win with Collins and Nelson in their own duel for the runner up spot. In the end, Nelson got by and took 2nd, Collins 3rd, Dave Holstein came home 4th with Geoff Provo 5th. For the win, Roger took home the GoPro Hero4 Camera.

4 kid karts, 2 Hondas and 2 Comers, took to the track on Saturday running the North loop of the Simraceway kart track. The Kid Karts ran for 6 sessions with the 5th session being an 8 lap Pre-Main followed by a 10 lap Main. Kid Karts will be a participation only class this year with awards at the end of the day by no official championship. In the Qualifying session, Nigel Wildt (Comer) took the pole ahead of Christian Cameron (Honda), Andrew Freire (Comer) and Sasha Ryabov (Honda). In the Pre-Main, Christian made the pass for the lead and drove on to the win, Andrew 2nd and Nigel 3rd. In the Main, Andrew took the lead out of turn one with Christian challenging for the lead entering turn two. The two karts touched and Christian had to drive over the corner rumble strip and threw his chain. Andrew continued on but a few laps later had his fuel line come off and had to park his kart. It was now Nigel and Sasha in a close battle for the lead and the two crossed the finish line almost side up side with Sasha edging out Nigel for the win. Sasha took the Sanzaru Series’ first ever Kid Kart win (as well as first in the Honda class), Nigel 2nd (first in the Comer class), Andrew 3rd (2nd in the Comer class) and Christian 4th (2nd in the Honda class. 1st and 2nd place Medals were awarded to the drivers. 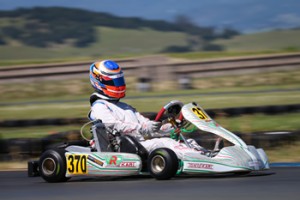 Zach Pettinicchi took the pole ahead of Enzo Prevost and Kyle Loh. In the first Pre-Main, Enzo passed into the lead and held on to take the win, Zach 2nd, Kyle 3rd and Zia Harvey 4th. In the second Pre-Main, Zach took the early lead and held off Enzo to take the win, Enzo 2nd, with Kyle and Zia a repeat in 3rd and 4th. In the Main, it was the same top three karts battling up front with Zach taking the early lead and not giving Enzo any look to make a pass. In the end, Zach, who turned 18 on Saturday) took the win, Enzo 2nd, Kyle a well-deserved 3rd, new comer Dominic Giansiracusa 4th, Brendan Fabular 5th and Zia 6th. This was Dominic’s first outdoor karting race as he previously only had indoor karting experience. 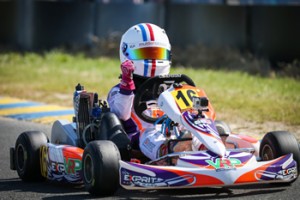 The Micro class had another large field of drivers. Christian Legaspi took the pole just ahead of Sebastiaan Mulder but Christian had problems in post Qualifying tech and was moved to the back. Thus Sebastiaan took the pole ahead of Skyler Geczi and Ayrton Tyler. In the first Pre-Main, Sebastiaan drove on to a convincing win ahead of Skyler, Christian driving through the field to finish 3rd with Adam Freire 4th. In the second Pre-Main, the result was the same as in the first race with Sebastiaan taking a second convincing win, Skyler 2nd, Christian 3rd and Adam 4th. In the Main, Sebastiaan took the lead out of turn one followed by Christian and Skyler and a 4 kart battle for 4th. Christian started third in the Main, but was not able to challenge Sebastiaan in speed. At the flag, Sebastiaan took the win, Christian drove a solid day of racing to take 2nd, Skyler 3rd. The 4 kart battle for 4th was won by Adam Freire followed closely by Ryan Persing, Andrew Rivera and Ayrton Tyler.

The Junior Rotax class looks to be the strongest class in the series from top to bottom. Bryson Lew took the pole ahead of Colin Mullan and Brennan Stammer. In the first Pre-Main, Bryson took the lead at the drop of the green followed closely by Colin with Nick Persing battling with Brennan for the 3rd spot. In the end, Bryson did not make any mistakes and did not give Colin a good look for a pass, so Bryson took the win, Colin 2nd, Nick held off Brennan to take 3rd. In the second Pre-Main, Bryson took the early lead again followed closely by Nick and Brennan. Colin fell back early and could not make up the lost ground. In the end, Bryson took the win, Nick 2nd, Brennan 3rd and Ryan Tate 4th. In the Main, Bryson again took the early lead again followed by Nick and Colin with Brennan falling off the pace a bit. Going into the last lap, Byson made one mistake exiting the bottom turn and this allowed Colin to drive deep into the sweeper that leads into the infield portion of the track. Colin now had the lead followed by Bryson. Going into the last turn, Colin got through the turn clean but Nick banged into the side of Bryson to overtake Bryson for 2nd. The officials ruled the contact that Nick put on Bryson was too rough and awarded 2nd to Bryson with Nick taking the 3rd, Brennan 4th and Ryan 5th.

Pro Stock driver Jacob Neal took the pole ahead of Masters Eric Molinatti and Patrick O’Neill. In the first Pre-Main, Jacob moved to the back of the pack thus Molinatti was on the pole. On the start, Molinatti got off the line slow with O’Neill leading the field through turn one. Molinatti recovered to work his way back to 2nd. In the end, O’Neill took the win, Jacob Neil worked his way past Molinatti to take 2nd, Molinatti 3rd and Travis Bowles 4th and Nick Major 5th. In the second Pre-Main Molinatti took the early lead and was never headed followed by O’Neill, Kevin Woods and Justin Bennett and that is how they finished. In the Main, Molinatti took the lead at the drop of the green and was never seriously pressured. O’Neill held a close 2nd but could not pick up the extra speed to make a challenge. The best race on the track was for 3rd with Bowles getting strong challenges from Woods and David Arnstein. In the end, Molinatti took the win, O’Neill 2nd, Bowles 3rd for his first podium finish in the series, Woods 4th and Arnstein 5th. Pro Stock Jacob Neil started the race way back from the Masters and worked his way to 7th overall recording a fast lap of 48.873 seconds. 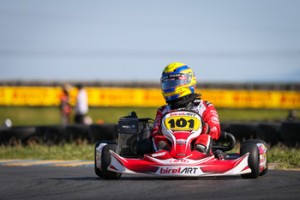 A big field of karts took the track to equal the largest class of the day. Aiden O’Neill took the pole followed by Dustin Salaverria and Matteo Sandoval 3rd. Matteo had a tech issue and was placed in the 10th position with Jovy Levin moving up to the 3rd spot. In the first Pre-Main, Dustin was able to get in front of Aiden early in the race and handled the pressure from Aiden to take the win. Matteo quickly worked his way through the field to take 3rd with Aiden Piggott 4th. The second heat was a repeat of the first with Dustin getting ahead of Aiden O’Neill and taking a 2 second win, Sandoval again worked his way from 10th to 3rd with Aiden Piggott 4th. In the Main, Dustin took the early lead closely followed by O’Neill with Matteo 3rd. On lap two, the two leaders touched and both spun with O’Neill getting stuck on a curb and was out of the race. Matteo took over the lead and proceeded to open up a sizable gap on the rest of the field. Dustin was able to return to the race but some positions behind. Dustin worked his way into 2nd and started the chase for the lead. Going into the last lap, Dustin was a few kart lengths back and had a chance to close the gap but Matteo drove a strong clean lap and the gap did not shrink that much. Going into the last two corners, Matteo had a gap that appeared to assure the win but Dustin made a late attempt for a pass on the last corner that resulted in hard contact with Matteo, the hit resulted in Matteo flipping. A red flag was displayed to stop the race and the rest of the field being stopped before the incident. The race was called complete at that point, Dustin being issued a DQ for the causing the incident on Matteo and the finishing order was as determined by the last completed green lap at lap 14. Matteo was awarded the win, Aiden Piggott 2nd, Jovy Levin 3rd, Nolan Siegal 3rd and William Ferguson 5th. This was the first series podium finishes for Piggott and Levin.

Enzo Prevost took the pole in this field ahead of Matt Cresci and Richard Hilleman. In the first 8 lap Pre-Main, Cresci took over the lead from Prevost and drove onto the win, Jimmy Casey 2nd and Enzo 3rd. In the second heat, Enzo held off the challenges from Cresci and took the win, Cresci 2nd and Casey 3rd. In the 12 lap Main, the same top three drivers from the Pre-Mains ran nose to tail in the Main each trying to determine when was the best time to make the final attack. In the end, Casey took the win with Cresci and Enzo just a half second back with Hilleman in 4th. 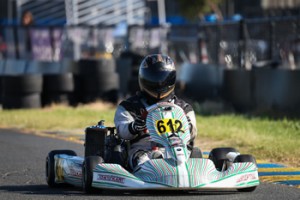 Nine drives took the track with Roman Alekseenkov taking the pole ahead of Kelly Heil and Vijay Nagarajan 3rd. In the first Pre-Main Roman took the lead out of turn one and was never headed. Kelly was close but could not muster the speed to challenge for the lead. These two finished 1-2 with Roman the winner, Kelly 2nd, Vijay 3rd, and Tom Fallon 4th. In the second Pre-Main, Roman and Kelly again lead the field with Roman taking the win, Kelly close behind with Bob Olson coming in 3rd and Vijay 4th. In the Main, Roman controlled the field from the front again and drove on with no errors to take the win. Kelly stayed close but could not match Roman’s speed and settled for a solid 2nd. Vijay came home 3rd, Olson 4th and Aaron Farris 5th.

The next race will be May 15 where the track configuration will be the Pro National Track and the GoPro Feature class will be Senior Rotax.