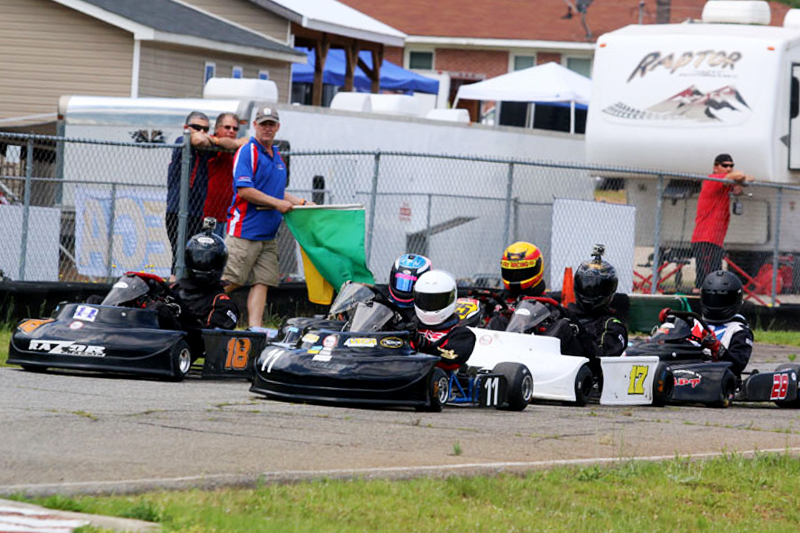 The American Kart Racing Association and Georgia Sprint Karting Association joined this past weekend to put on a successful and fun weekend at the historic Lamar County Speedway in Barnesville, Georgia, where racers, fans and officials enjoyed the second round of the Vega USA American Sprint Cup Series presented by TSRacing.com.

Teams from five different states – Georgia, Florida, Tennessee, Louisiana and North Carolina – made the trip to Barnesville the regional event, and they were greeted by hot temperatures near 90 degrees throughout the three-day event.

Over 30 racers took part in a smooth Friday practice day that included seven complete rounds of practice with 10-minute sessions for every session from 11am to 6pm. 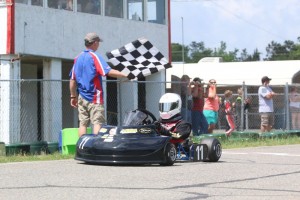 The Kart City Performance 206 Cadet division saw Georgia’s Tanner Carterdrive his Razor chassis to the win over IONIC Edge Chassis driver Elijah Skaggs. Carter and Skaggs were the class of the 5-kart field with Owen Lloyd, Kelly Puckett and Louisiana’s Camryn Reed just a few tenths of a second off the leaders and finishing third, fourth and fifth, respectively.

While Puckett wasn’t able to run with Carter and E. Skaggs in the main event, he did score the Pole Award with a fast lap of 26.052. It marked Puckett’s first Pole Award of the 2016 season.

Joey Miller, Bob Barthelemy and Matt Skaggs waged a close battle throughout the day in IONIC Edge Chassis 206 Masters. After winning the pole, Miller had just enough to stay in front of Barthelemy and Skaggs in the 12-lap heat.

Come feature time, many thought local veteran Barthelemy would give Miller all he could handle, but Miller made some adjustments before the main and was able to keep several kart-lengths between him and Barthelemy. Miller would drive his Razor to his third 206 Masters win of the AKRA season. Barthelemy was second, Skaggs third, Jody Covington fourth and Andy Jones fifth.

Razor Chassis / Roberts Kart Shop owner Stevie Roberts joined the on-track action at his home track. Roberts, who now only races a handful of times each year, showed the TSRacing.com 206 Senior Heavy field he’s still got what it takes to win, scoring a clean sweep of the day’s competition highlighted by a 0.479-second win in the 18-lap feature over Colin Warren.

Warren kept his TS Racing Eagle chassis within striking distance of Roberts throughout the main event, but would never get within two kart-lengths of Roberts’ rear bumper, allowing Stevie to lead wire to wire for the victory. Joseph Skaggs finished 4 seconds back in third with Barthelemy and Ryan Taylor rounding out the top five. 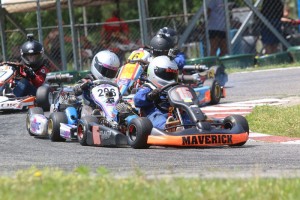 Peyton Bridges once again was the class of the field in Boon & Sons 206 Kid Kart. Bridges drove his Razor to the Pole Award – including a $50 bonus posted by AKRA – but made a mistake in the heat race, spinning out in the “esses” and allowing Brently Miller to race ahead for his first win of the weekend in a great race with Peyton and Rachel Richter.

Bridges would return strong in the 15-lap feature and lead wire to wire for the win. Miller would settle for second and Richter third. Brock Mathis drove his #88 to the fourth finishing position.

Tanner Carter made it two for two in Kart City Performance 206 Cadet with a close win over Elijah Skaggs in Sunday’s 18-lap weekend capper. Skaggs stayed glued to Carter’s rear bumper throughout the race as the two drivers put on a good show out front. Cody Hall joined the action Sunday after competing with is U.S. Legends car Saturday. Hall would settle for third, Owen Lloyd fourth, Kelly Puckett fifth and Camryn Reed sixth.

Carter also pocketed the $100 bonus for winning the 206 Cadet pole.

The TaG Cadet 12-lap heat race was one of the best of the weekend. Rubio, Sanders and Tanner Carter battled it out throughout the race with Sanders taking a brief mid-race lead before Rubio shot back to the inside to retake the lead and eventually score the victory. Carter rode a close third during the battle and nearly moved his FA Kart into the lead at one point of the contest.

The 18-lap feature was clean and green with Rubio leading wire to wire to win over Sanders by a several-kart-length advantage. Carter settled for third, Peyton Bridges fourth and Lennox Roock fifth. Sanders won the $50 Pole Award on his Atlanta Karting built Maverick chassis.

Things became more interesting during the 18-lap main with Miller trying everything to overtake Skaggs. On lap 10, Miller would shoot to the inside of Skaggs into the hard left-hander at the end of the backstretch. Contact sent Skaggs through the grass with Miller taking the lead.

Two laps later Skaggs moved back to the inside of Miller to retake the lead and drive his #11 to his first AKRA win of the season. Tennessee’s Jody Covington finished a close third with Andy Jones P4.

Skaggs’ victory also put an end to Miller’s three-race win streak dating back to Round 1 at Kershaw, S.C.

The weekend’s final race saw Joseph Skaggs score his first AKRA win of the year in TSRacing.com 206 Senior Heavy. Skaggs drove his Arrow to an impressive win over Colin Warren, who would settle for P2 both days in 206 Heavy. Ryan Taylor drove well to a P3 finish with Aren Smith P4 and Ron Mathis rounding out the top five.

Joseph Skaggs’ fine weekend wasn’t just sucessful on the track. At Sunday morning’s Drivers Meeting, Joseph won the drawing for the Brute by Briggs generator, which retails at around $450. Thanks to Briggs Racing for posting the Brute by Briggs Inverter for a random drawing at every AKRA American Sprint Cup Series event in 2016!

Busted Knuckle Racing will have plenty of Vega FH front tires after Sunday’s Drivers Meeting. Bustle Knuckle / Miller Racing drivers Andy Jones, Joey Miller and his son, Brently, won three of the four Vega tire giveaways, each winning a pair of fronts! Ryan Taylor won the other pair. Thanks to Vega USA for sponsoring the tire giveaways at all American Sprint Cup Series races this year!

Click here to view MYLAPS results from AKRA at Barnesville.

Many thanks and appreciation to all racers, families and teams for their attendance at Barnesville. Thanks to the GSKA and their fine officials for helping accomplish a great weekend.

Next up for the American Sprint Cup Series is Round 1 of the “Northern Tour” presented by Boon & Sons June 3-5 at the Genesee Valley Kart Club in Avon, N.Y.